Will you Beat the Bobbies and escape with treasure?

Eyecon’s Beat the Bobbies is the first in a popular series of slots, and it’s easy to see why it’s so well-liked! Join Penny the cat-burglar in a bid to beat the bobbies across five reels and a tantalising 243 ways to win.

The compelling narrative of this game invites you in and leaves you wanting more, particularly when it comes down to the possibility of free games. If you’re thinking about teaming up with Penny in Beat the Bobbies, check out our review down below.

This Eyecon slot is quintessentially British, with the bobbies and bulldogs galore, so why not feel patriotic as you spin the reels? Try out Beat the Bobbies at Videoslots and claim a £200 bonus when you sign up.

bgo is one of Blueprint's biggest and most popular casino sites. Sign up to bgo casino and deposit £10 to win up to 500 free spins by spinning the Mega Wheel! Why not try your hand at the patriotic Beat the Bobbies, from Eyecon Gaming, and see if you can escape with big winnings?

You'd be crazy to miss this welcome offer! With 24 hours of free bingo and 30 free spins on your first deposit, MrQ online casino has one of the most impressive bonuses. Sign up and choose from hundreds of casino and slot games. Why not try the uniquely British Beat the Bobbies from Eyecon Gaming?

Deposit £10 or more at Buzz Bingo to claim a £30 bingo bonus, plus £20 worth of free spins. You can play the latest slot games, including the uniquely British Beat the Bobbies, the slot adorned with the bobbies and bulldogs to make you feel patriotic as you spin the reels!

Monster Casino will have you screaming- but not with fright. These monsters only come out to play slot and casino games. Join them as you play Beat the Bobbies and see if you can beat this uniquely British slot! Sign up to claim a £500 bonus and 50 Free Spins.

Can you get free games in Beat the Bobbies?

How many ways to win are there in Beat the Bobbies?

In total, there are 243 ways to win in this Eyecon slot. Instead of utilising traditional paylines, this slot allows you to win whenever you match symbols in three or more adjacent reels, starting with the leftmost reel.

What’s the RTP of Beat the Bobbies?

The RTP, or return-to-player, of Beat the Bobbies is 95.25%. Around 94-96% is average, so this a perfectly respectable RTP for a slot like this. Moreover, Beat the Bobbies has medium volatility, so there’s a balance between the size and frequency of wins. 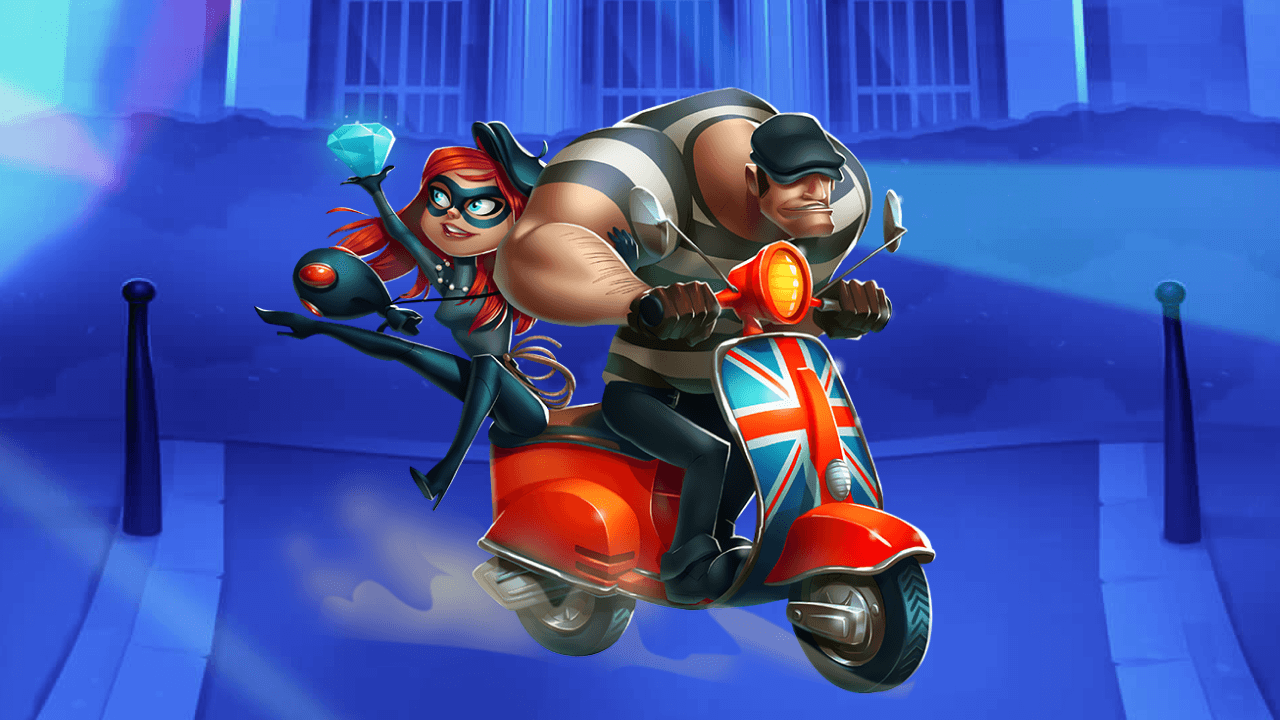 Before the sequels and jackpot versions, there was the original. Head to London and work with Penny the cat-burglar to outsmart the bobbies, perhaps winning some free games too! You’ve got the chance for some big wins, with 243 ways to win, so should you give Beat the Bobbies a try? Keep reading on to find out.

The sound of sirens

We’re in the British capital, and this game is quintessentially British. From the bobbies themselves to the guard and the bulldog, we couldn’t be anywhere else. As a result, there’s a lot of red, white and blue here, with a blue filter over the background and of course a blue play board too. The graphics are 3D in style but very much cartoonish, looking as if they could be from a CGI-animated TV show.

When it comes to the sound, however, like in a lot of Eyecon slots it’s kept fairly minimal. This means no musical soundtrack or character voiceovers, and you may well prefer it more stripped-back like this. Instead, there are the usual slot machine sound effects when you spin, and then a little jingle when you match symbols to win - there’s not much aside from this.

How do we beat the bobbies?

Beat the Bobbies has five reels, but 243 total ways to win - conventional paylines aren’t in play here. All wins are of course multiplied by the total bet, and to win, you just need to get three or more matching symbols in adjacent reels, beginning with the leftmost reel. The scatter symbol also pays out too, but pays no matter where they are on the play board. As a result, they’re multiplied by the total wager instead.

The wild symbol substitutes for all symbols apart from the scatter symbol, appearing on the three middle reels. Meanwhile, there are a number of regular paying symbols, ranging from characters in the storyline to the jewels that Penny the cat-burglar is aiming to get away with! The least-valuable symbol is the old woman - she can get you a maximum of £4 from a £1 spin - while the most-valuable regular symbol is the diamond. It’s ten times as valuable as the old woman, so it’s definitely one to watch out for. However, it’s still not as valuable as the scatter symbol, as five of these will get you 50x your total wager, so £50 from a £1 spin!

Free games on the run

You can even retrigger free games again, should you get more scatter symbols turn up while using your initial free games. Again, you’ll be faced with the choice of five options - will you go with the same as before or try something new? Free games can be retriggered a maximum of 15 times, and when triggered again, you’ll see a feature trigger counter above the reels showing how many more you’ve got left. You can also find the multiplier on the top right of the reels.

Beat the Bobbies is fun and has an engaging story to follow along with entertaining graphics and a solid theme. An average RTP and medium volatility help it along, but some players might prefer slots with more bonus features. The free game feature here is good, but perhaps not exciting enough for players who like more unconventional slots. That said, with 243 ways to win and some valuable symbols up for grabs, there’s no reason not to give this slot a try.

Eyecon come from Australia, and have been around since 1997. However, they only began making slots 20 years later, as Fluffy Favourites made its debut. It’s still one of the company’s most popular slots, but it’s now just one of many games in Eyecon’s catalogue. As well as Fluffy Favourites and the Beat the Bobbies range, why not try Beez Kneez, Autumn Gold or Secret Garden?