Head to ancient lands, where what the gods say goes. Eyecon’s Temple of Iris sees you delve straight into Ancient Egyptian culture with various hieroglyphs and symbology, but Iris herself is a Greek goddess - she’s the goddess of the rainbow and messenger too.

This mythical slot has 25 paylines and an RTP of 95.436, but is it one that you should try out? Check out our review down below for everything you need to know about Temple of Iris.

Journey into the Temple of Iris as see if you can find the treasure. Sign up to Buzz Bingo and claim an exlusive offer. With £20 in free spins and £30 bingo bonus you won't want to miss out on joining one of the top online casinos on the market today.

Mecca Bingo is one of the biggest names in the online casino market and for good reason! Find all the best slot games including the Egypt-themed Temple of Iris! Sign up and deposit £10 to claim 25 free spins. Try your hand at Bingo, slots, and casino games with one of the country's top trusted sites.

Bringing the best slot games together in one place, bgo is the obvious choice for any slot fanatic, with a huge range to choose from. Why not take yourself to the deserts of Egypt and explore the Temple or Iris. Will you uncover the ancient riches? Sign up and spin the Mega Wheel for the chance to win 500 Free Spins.

Mansion? Castle? Temple! The Temple of Iris is available to play at Mansion Casino. Journey through the ancient history of Egypt and dig up the treasures of the Pharoahs of old. New players to Mansion Casino can claim a 100% bonus up to £500. That's a bonus fit for a Pharaoh.

Over 18s and new players only.
playBucky Bingo REVIEW

New to Bucky Bingo? Deposit £10 and claim your £30 bingo bonus funds and a further 100 free spins, which can be spent on playing Fluffy Favourites. Try your hand at Temple of Iris and explore the riches untold of Ancient Egypt.

Terms & Conditions: New 18+ customers only. £10 min deposit. 100 Free Spins [FS] can be used on a game of our choice, noted in full terms and are valued at 10p per spin. FS Winnings capped at £50. FS winnings granted as Games Bonus that must be wagered 30x. FS available for 30 days. Games Bonus win cap £100 plus the original bonus amount. Wagering contributions vary by game. The £30 Bingo Bonus must be wagered 4x. UK only – deposit balance available for withdrawal at any time. General withdrawal restrictions apply. Eligibility restrictions, country restrictions & full T&Cs apply. 18+

Are there free games in Temple of Iris?

You’ll trigger 15 free games when three or more scattered pyramid symbols appear anywhere on the play board at once. Free games are played using the same paylines and wager as the triggering game, and free games can be retriggered a maximum of 15 times. All prizes are tripled during free games too.

What’s the gamble bonus in Temple of Iris?

The gamble bonus will pay double or nothing on the last win. To win, you just need to select the correct choice of two - each bonus round is an independent event.

What’s the RTP of Temple of Iris?

The RTP, or return-to-player of Temple of Iris is 95.436%. This is around average, as most slots tend to have an RTP in the range of 95-97%. Moreover, Temple of Iris has medium volatility, so there is a balance between the size and frequency of wins in the game. 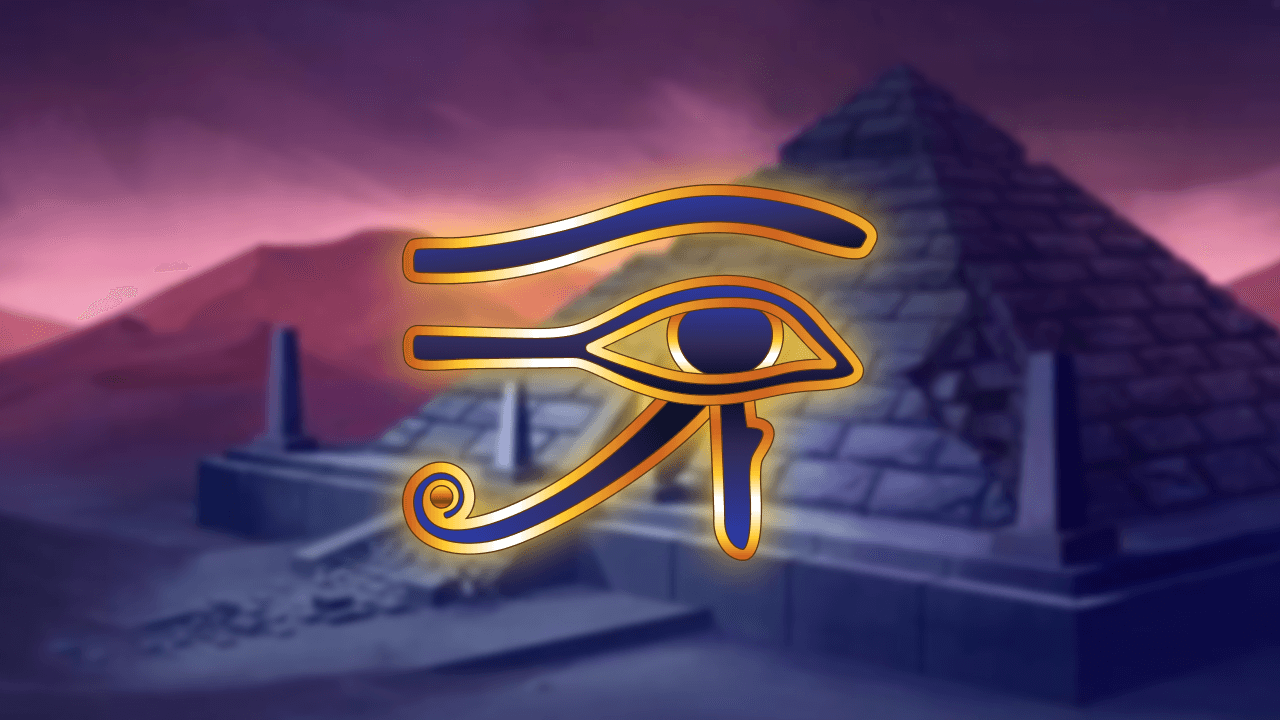 A combination of Ancient Egyptian and Ancient Greek mythology, Eyecon’s Temple of Iris is a fun slot that allows you to look back across history and meet the goddess of rainbows herself. Though it’s quite a simple game, you’ve got the chance to win free spins, and there’s the added excitement of the gamble bonus too, so there’s definitely enough to warrant trying it out - for more information, keep reading on!

Things could get stormy - just look at the background to this slot. The sky looks cosmic, with blue and purple decorated by shining white stars, though there are clouds too, giving an orangey-yellow hue to proceedings. Meanwhile, the symbols are all in hieroglyph style, looking every inch the perfect Ancient Egyptian letters, and the artefacts all look realistic - you could be viewing them in a museum!

The play board has a gold border, making it look incredibly regal and fit for a pharaoh, while the colours all have a metallic quality. Of course, nothing else would do for a goddess like Iris. As with a lot of Eyecon slots, however, there’s little in the way of sound and music. You’ll hear some of the game’s mechanics, as you spin, and when you match symbols or see the scatter symbol, you’ll hear some brief sound effects too, but if you prefer to have other background noise while you play, like music or the TV, you won’t be missing out.

Going through the temple

Temple of Iris’ play board is simple. There are five reels, each with three symbols each to make a play board with 15 positions in total. The priestess symbol is the wild symbol here, and it substitutes for all symbols apart from the scattered pyramid symbols - it also doubles your prize when it appears in a line win, substituting for a regular symbol. For its part, the scattered pyramid symbol also pays out, with wins multiplied by the total wager. Five of them would see you winning £450 from a £1 bet, so they could really help you out!

There are 11 different regular symbols to match, ranging from letters and numbers to various Ancient Egyptian artefacts, and then of course the priestess, who is the most valuable symbol of them all - five priestess symbols will pay out ten times as much as five of the next most-valuable symbol. There’s a total of 25 paylines here, and they’re all typical for a slot of this nature. As normal, line wins are multiplied by the wager per payline, and all lines pay from left to right, starting with the leftmost reel.

Everyone loves free spins, and that seemingly includes Greek goddesses! To win free spins in Temple of Iris, you just need to find three or more scattered pyramid symbols appearing anywhere. You’ll begin with 15 free spins at first, but you’ll have the chance to retrigger them again, up to a maximum of 15 times. Though they’re played using the same paylines and wager as the triggering game, like you’d expect, all prizes you win during free games are tripled!

Aside from free spins, you have the gamble bonus too - if you so choose, that is. Should you take the risk, it’ll pay out either double or nothing on the last win. You’ll be faced with two different choices, and once you’ve chosen one, you’ll find out if you were right or not, and thus whether you’ll win double, or nothing! Each bonus round is an independent event, so it’s up to you if you dare take that risk...

Though Egypt-themed slots might be pretty common, Eyecon’s infusion of Ancient Greece along with Ancient Egypt puts a new spin on the genre, and it works well. The RTP of 95.436% is acceptable, and the free spins and gamble bonus features add some excitement. Overall, Temple of Iris is a game with a cohesive theme and some good features, so it’s definitely worth trying, particularly if you’re a fan of slots with a historical or mythical bent.

Australia’s Eyecon have been in business for over 20 years, but just started making slots in 2017, with the ever-popular Fluffy Favourites. However, there are plenty more where that came from, as alongside Fluffy Favourites and Temple of Iris there are the likes of Autumn Gold and Beez Kneez. With so many different games to try, you’ll never be bored playing Eyecon slots!