Feel the cool autumnal breeze as you spin these reels

From Eyecon comes Autumn Gold - it’s set in a peaceful field in the middle of autumn, and features a whole host of cosy symbols across three reels and nine paylines! A simple yet fun slot, Autumn Gold has consistently remained well-liked by players, not least due to the friendly woodland creatures you’ll come across as you spin. Check out our review below to find out everything you need to know regarding this Eyecon slot.

You'd be crazy to miss this welcome offer! With 24 hours of free bingo and 30 free spins on your first deposit, MrQ online casino has one of the most impressive bonuses. Sign up and choose from hundreds of casino and slot games. Why not try the fittingly seasonal Autumn Gold from Eyecon Gaming?

Sign up to Vegas Luck and deposit £10 for a chance to win up to 500 Free Spin with the Mega Wheel! Play over 550 casino games including casino classics and your favourite Eyecon Gaming slots like Autumn Gold. Will you strike gold?

bgo is one of Blueprint's biggest and most popular casino sites. Sign up to bgo casino and deposit £10 to win up to 500 free spins by spinning the Mega Wheel! Why not try your hand at the refreshing Autumn Gold, from Eyecon Gaming, and see if you win big as you spin these seasonal reels?

It's not just wizards who are magic. Feel the power of the autumn breeze with this seasonal slot, Autumn Gold at the home of free spins. Not only that, you can win up to 500 spins on Starburst when you make your first deposit. Why not see what the fuss is all about?

Deluxino is the casino for players who love spinning on the most popular slot games. Sign up today and you’ll be treated to 25 free spins when you deposit using promo code DELUXINO. All spins are free from wagering and paid into your real cash balance. At Deluxino you can spin the reels in this refreshingly autumnal slot, Autumn Gold.

Can you win free games in Autumn Gold?

Yes. If you get three scattered maple leaf symbols anywhere on the play board simultaneously, you’ll trigger eight free games. Prizes for both line and scatter wins are tripled during free games, and you can retrigger free games a maximum of 15 times. However, free games are always played using the same paylines and wages as the triggering game.

How does the gamble bonus work?

The gamble bonus pays double or nothing on your last win. You’ll be faced with two choices, and you’ll have to select the correct one to win. Play will continue until you either decide to take the win, your next win would exceed £32,000, you make five correct choices, or you get one wrong.

What is the Prize Pick feature?

You’ll trigger the Prize Pick feature when three scattered umbrella symbols appear anywhere on the play board simultaneously. You will be awarded three picks, and each one will get you a prize of up to 111x your total wager. Prizes awarded across the three picks are added together to give you a total win. 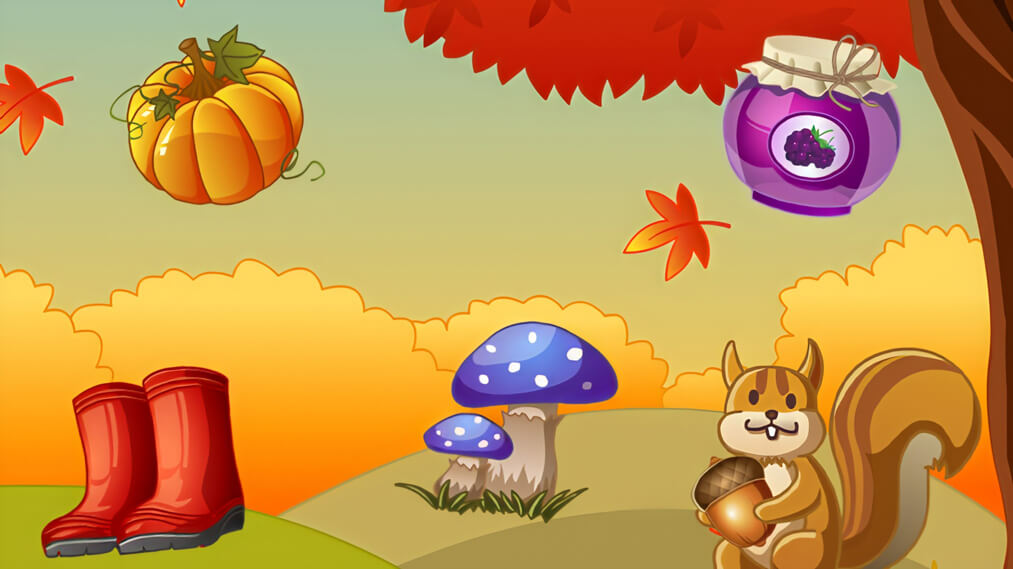 The simplicity of Autumn Gold only adds to its charm - what’s better than strolling through a field as the leaves change colour and fall from the trees, squirrels at your shoes? Though the 3x3 play board might not appeal to players more accustomed to slots with five reels, there are some fun bonus features, and of course a stripped-back, rural appearance too. Thinking of giving this Eyecon slot a try? Read on to find out what you need to know...

There’s nothing too complicated here - the graphics are simple but charming, set in a cartoon field where everything has an orange glow, from the trees and grass to the sky. On the playboard, you’ll find colorful pumpkins, toadstools, and even jars of jam - everything you’d associate with autumn is here.

If you like your slots to come with music, you’ll be disappointed as Autumn Gold doesn’t have any songs playing in the background. However, there is the occasional sound effect - most noticeably when you get a winning line. You’ll know that you’ve won when you hear this jovial noise, so you’ll definitely come to love it!

Strolling through the fields

The play board here is quite small, just 3x3 - there are nine symbols at a time. You have a maximum of nine paylines, but you can have as many or as little as you like in play - as a result, your potential bet can be as little as 1p per spin and as large as £90. The Autumn Gold symbol is the most valuable, as you’ll get £100 from a £1 bet if you match three in a line, and it doubles as a wild symbol too, substituting for all symbols apart from the two scatter symbols featured in this Eyecon slot.

The next most valuable symbol is the owl, which from the same bet would get you £30, and it’s followed by the squirrel, which would award you £10. The remainder of the symbols are less valuable, but should you win, you’ll get your bet back as a minimum. You should also look out for the umbrella scatter symbol, as three of these together will trigger the Prize Pick feature. Here, you’ll be awarded three picks, and each one can get you a prize of up to 111x your total wager. The three prizes will be added together, and so could give you an attractive-looking win!

If you want to win free games, you’ll be in luck! Find three maple leaf scatter symbols anywhere on the play board to win eight free games - prizes for both line and scatter wins are tripled while you play them, so they give you a good opportunity to increase your winnings. Free games are played using the same paylines and wager as the game on which you trigger them, and you have the opportunity to retrigger them a maximum of 15 times.

Perhaps you’re feeling a little more risky this autumn, in which case the gamble bonus might be for you. It pays double or nothing on the last win, so you could either leave with nothing or be twice as thrilled with the result! You’ll be faced with two choices, and you have to select the right one to win. You can continue playing until either you decide to take the win, your next win would exceed £32,000, you make five correct selections, or you get one incorrect. Do you dare to risk it all?

Autumn Gold is a fun game that won’t take you long to get to grips with - it’s simple but still manages to be entertaining with a pleasant theme. The RTP of 95.409% is about average, so there’s no harm in giving it a go. It’s a medium-volatility slot too, so you can expect a good balance between the frequency and size of your wins. Meanwhile, the Prize Pick feature is a nice way to pick up some extra cash, and the free games are sure to excite too.

Australia’s Eyecon first arrived on the scene in 1997, but didn’t begin to make slots like Autumn Gold until late 2017, with Fluffy Favourites - one of the company’s most popular titles. Since then, they’ve wasted no time in firmly making a name for themselves, with slots and scratch cards including Beez Kneez, Secret Garden and Beat the Bobbies.