Eyecon is an Australian-based slot provider, owned by Playtech, that has been producing slot games since 1999. Its most popular titles include Fluffy Favourites, Fluffy Too, Shaman’s Dream and Beat the Bobbies. You can play Eyecon’s slots portfolio at the casinos below.

Join Deluxino today and deposit £10 using code DELUXINO to claim 25 free spins on Fluffy Favourites. All winnings are free from wagering requirements and credited to your real money balance. Choose from over 300 popular slot games including Shaman’s Dream and Shopping Spree.

Sign up, deposit and spend £10 using the promo code V30 to get 30 free spins on the hit Eyecon slot, Champions of Valhalla. MrQ has zero wagering requirements, so everything you win is yours to keep. You can find the latest Eyecon slot games at MrQ including Crystal Lotus and Legend of the 5 Ninjas.

Videoslots has over 3,100 games including top Eyecon games like Shaman’s Dream, White Wizard Deluxe and Beat the Bobbies. Join today and you’ll be rewarded with 11 no deposit spins with zero wagering requirements. Deposit to claim a 100% match bonus up to £200 and the chance to win up to 4,200 extra spins.

bgo is one of Blueprint's biggest and most popular casino sites. Sign up to bgo casino and deposit £10 to win up to 500 free spins by spinning the Mega Wheel!

Deposit £10 or more at Buzz Bingo to claim a £60 bingo bonus, £20 worth of free spins and a Main Event session worth £10 in any Buzz Bingo Club. All winnings are yours to keep and uncapped, so you can play the latest Eyecon slot games including Crystal Lotus and the third Fluffy Favourites sequel – Fluffy in Space!

Spin the Wheel
Up To 500 Free Spins

Sign up to Vegas Luck and deposit £10 for a chance to win up to 500 Free Spin with the Mega Wheel! Play over 550 casino games including casino classics and your favourite Blueprint Gaming slots like King Kong Cash, Ted and Genie Jackpots.

Wizard Slots has over 400 fun casino games on offer including your favourite slot games like 99 Time and Fae Legend Warrior. Register and deposit today to spin the Mega Reel to potentially win 20 free spins on the hit game Fluffy Favourites. All new players are treated to double cashback for a month.

How do I trigger an Eyecon progressive jackpot?

Many Eyecon games have progressive jackpot versions that are exclusive to an operator or network, meaning jackpot amounts differ between sites.

Each progressive jackpot is divided into three pots at varying amounts with a maximum value of £25,000.

Jackpot prizes are randomly triggered and can’t be prompted by landing a bonus round or increasing your wager.

Why are Eyecon games so popular?

If you’ve ever played an Eyecon slot game, you will probably agree that they don’t rival the high-quality 3D graphics used by other slot providers like NetEnt or Play’n Go. Yet, Fluffy Favourites is still one of the top-ranked slots of all time.

We imagine the popularity is due to the straightforward gameplay and diverse range of themes. For gaming operators, Eyecon slots can easily be offered with promotional free spins for special occasions thanks to games with celebratory titles, such as Happy Birthday, Sugar Train Xmas and Fireworks Frenzy.

Where can I play Fluffy in Space?

Fluffy in Space is the third sequel to the successful slot game Fluffy Favourites, after Fluffy Too. It’s due to release on all Eyecon casinos and bingo sites in June 2019, however it’s currently exclusively available at all Playtech sites, including Buzz Bingo, bgo Casino and Sun Bingo.

How Eyecon created a fluffy legacy 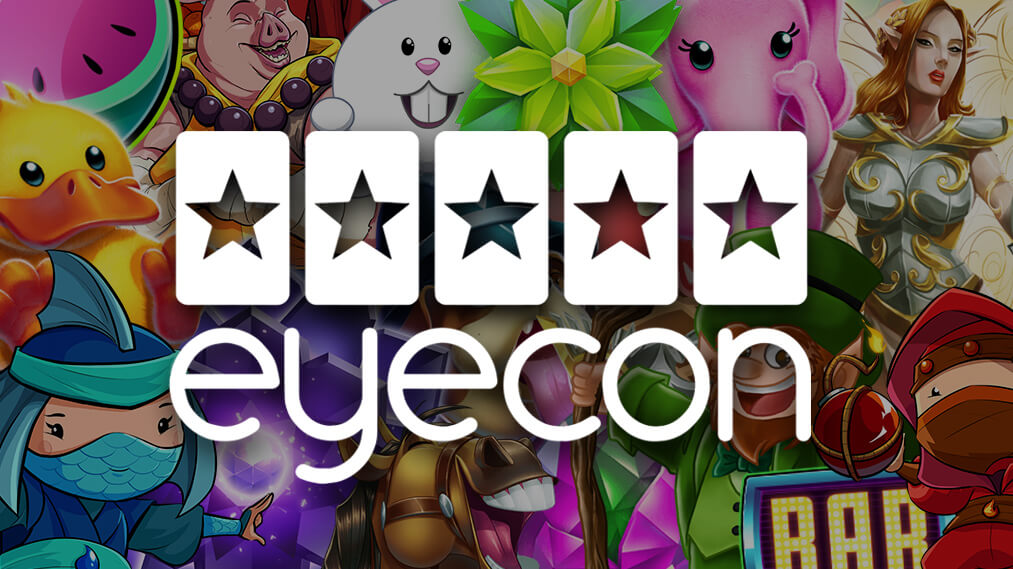 Eyecon was originally founded in 1997 as a computer game company. Two years later, it started to develop online gambling products and released its first game, Temple of Iris (formerly Isis) in 2003.

The company initially partnered with Jumpman and Dragonfish, meaning Eyecon’s games were primarily available on bingo sites and became a hit with bingo players. Its most successful slot game, Fluffy Favourites, is commonly offered as part of a free spins bonus.

Eyecon began shaking its bingo-focused identity when it was acquired by online gambling giant, Playtech, for £50 million in 2017. The acquisition resulted in Eyecon’s portfolio of games becoming available on Playtech casino sites like bgo, Bet365 and Coral.

Eyecon averages 10 new game launches per year and currently has 74 slot games live; a relatively small portfolio considering its first title was released over 15 years ago.

The company has two offices, one located in Brisbane, Australia, which focuses on slot games development. The second office is located in Alderney and is responsible for business development, marketing and sales.

Most of Eyecon’s slot games are designed on the classic five-reel, three-row playboard, with 25 paylines and limited bonus games. Players are normally awarded 15 free spins or it’s exclusive Pick Prize feature that pays out up to 100 times your original wager.

Eyecon has produced a handful of games with unique features including Stampede, Legend of the 5 Ninjas and Beat the Bobbies which all contain 243 paylines.

We like that you can alter the volatility if your bet by adjusting the coin value and paylines to create a bespoke wager within your budget.

Overall, the graphics are low-quality and while there has been some improvement with the launch of its latest game, Crystal Lotus, the company has a long way to go before it can compete with the top players like NetEnt and Microgaming.

Fluffy Favourites was first launched in 2006 and remains Eyecon's most popular slot game of all time. It’s spawned three spin-off games (Fluffy Too, Fluffy Fairground and Fluffy in Space) which all feature the iconic cuddly pink elephant.

The original slot game has 25 paylines, free spins round and an exclusive Toy Box pick bonus which can award up to 100 times your wager. The toy symbols also make cameos in other Eyecon slot games like Happy Birthday and Doubleup Ducks.

Its sequel, Shaman Spirit, shares the original game’s features including the wild symbol that doubles all winning paylines.

Every slot provider needs an Irish-themed slot game and Eyecon is no different. Irish Luck is a five-reel, 25 payline slot game with four bonus features.

If three or more fairy scatter symbols land on the playboard you’ll unlock the Match and Win Bonus where you can win up to 50 times your bet by selecting matching clover leaves.

It features three bonus rounds including the unique gumball bonus which is triggered when the red indicator on the right-hand side reaches the top of the wigwag. The gumball bonus awards up to 500 times the original wager.

Enchanted Prince is a fairytale-themed slot with 25 paylines and seven storybook symbols including a lilypad, crystal heart and princess castle.

If three or more frog symbols appear, you’ll unlock up to 25 free spins which can be retriggered a maximum of 15 times, meaning there are a potential 400 free spins up for grabs.

Eyecon has mysteriously dominated the slot game market on bingo sites and we’re not entirely sure why. Especially when you consider how many other high-quality slot games are on offer and how advanced technology has become.

However, the games are easy to play, inoffensive to look at and are great for players looking for simple slot games without complicated playboards and overengineered bonus games. 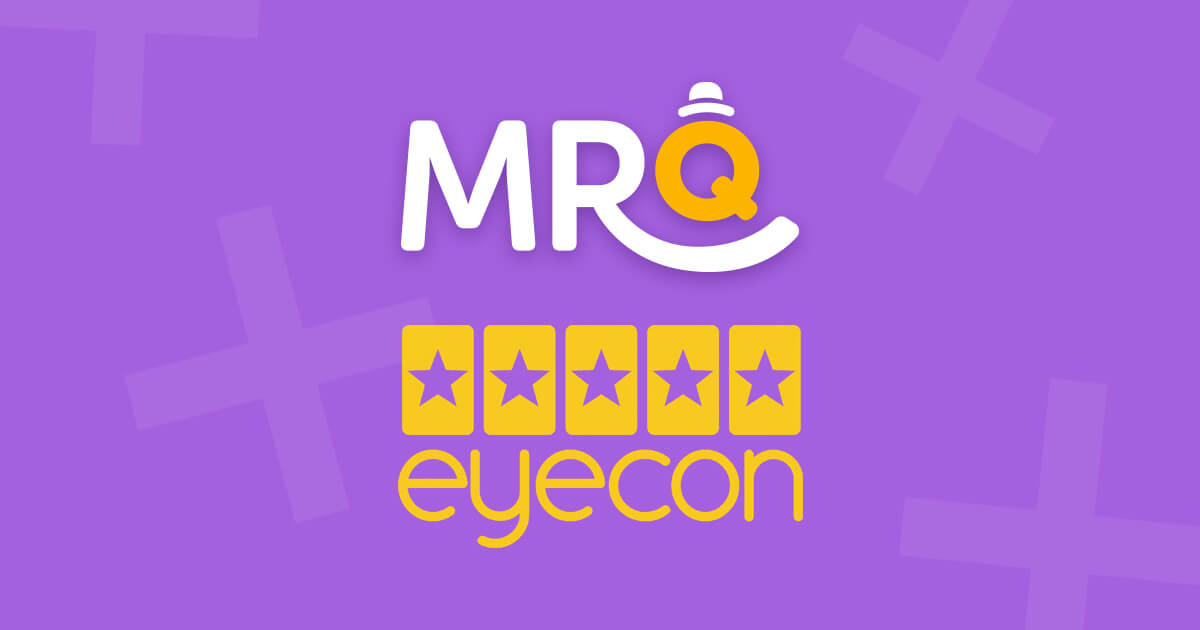 MrQ adds over 40 Eyecon slot games to its growing portfolio

You can now play big slot titles including Fluffy Favourites and Shaman's Dream in the MrQ lobby.