Will you reach the pot of gold at the end of the rainbow?

Try your hand at finding a pot of gold at the end of the rainbow in Eyecon’s Irish Luck - you’ll meet leprechauns and other friendly folk in this bright, cheerful slot that has five reels, 25 paylines, and a return-to-player of 95.047%. Eyecon’s take on the Ireland-themed game, it shows the Emerald Isle in a glorious light, so is it worth playing this slot? Check out our review below to find out.

Mecca Bingo is not just for Bingo! Find all the best slot games and try your luck with Irish Luck! Sign up and deposit £10 to claim 25 free spins. Try your hand at Bingo, slots, and casino games with one of the country's top trusted sites.

Playzee now offers the green, magical, Irish Luck slot. Full of the magic of the Emerald isle, will you be lucky as a leprechaun? Full of gems and Irish wonders this slot game is one not to miss! Sign up and deposit to claim a 100% bonus and 100 free spins.

Play Irish Luck at MrQ with absolutely no wagering requirements on any of its offers. MrQ has hundreds of slot games from all the top providers - you'll be spoiled for choice. New users can sign up and deposit £10 to claim 10 free spins on Stampede.

Sign up to Vegas Luck and deposit £10 for a chance to win up to 500 Free Spin with the Mega Wheel! Play over 550 casino games including casino classics and your favourite Eyecon Gaming slots like Irish Luck. Will you have the luck of the Irish?

Deposit £10 or more at Buzz Bingo to claim a £30 in-club and online bingo bonus, plus 10 free spins. All winnings are yours to keep and uncapped! Play all the best slot games, like an Eyecon Gaming favourite Irish Luck.

What is the Prize Pick feature in Irish Luck?

The Prize Pick feature occurs when at least three leprechaun scatter symbols appear anywhere on the play board - you’ll be given one pick for each symbol. On each pick, you’ll either uncover a fairy or a leprechaun - fairies get you a prize of up to 100x the total wager, whereas leprechauns will give you 10 free games each. When you’re awarded your prizes, they’ll be added together.

What does Match & Win mean in Irish Luck?

The Match & Win feature is triggered when three or more fairy scatter symbols appear anywhere simultaneously. In the feature, you’ll have to select clover leaves until you make a pair - this will end the feature. For each fairy symbol you have on the play board, you’ll win the value of the matching pair multiplied by the total wager for your prize.

Yes. It pays double or nothing on the last win - to win, you just need to select the right choice of two. Play will continue until either you decide to take the win, your next win would be over £32,000, you’ve made five correct selections, or you get one incorrect. 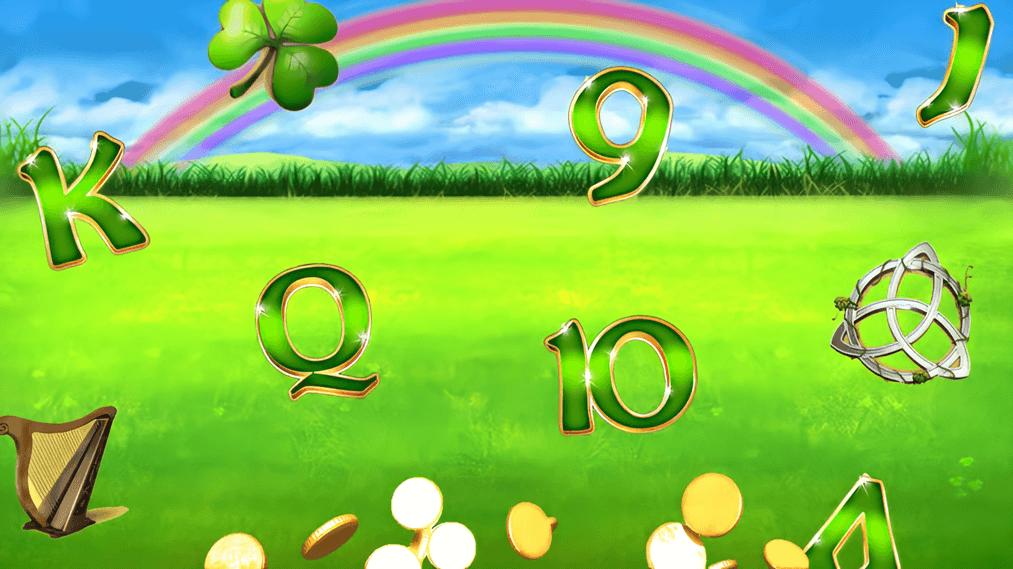 Irish Luck is full of fun and definitely looks upon the jollier side of life, as we aim to try our luck as we visit the Emerald Isle to see the very best of Ireland. As we get close to nature, you might find the unique Word Combo feature, and even trigger the Prize Pick too. Should you come on down and meet the leprechauns and fairies who live inside this entertaining slot? Keep reading to find out...

'Look' of the Irish

Everything’s very green, but there’s no need for jealousy - there’s room for everyone in the fields and rolling hills here. You’ll also spot a few trees, while there’s a bright blue sky with white fluffy clouds and of course a rainbow too, adding a whole lot of colour to the slot.  A lot of the symbols on offer look like pin badges, with the sort of 3D gleam reminiscent of the accessories, and show off various images of rural Ireland in cartoon style.

There are also friendly-looking leprechauns and fairies appearing as some of the symbols on this Eyecon slot, as well as some less picturesque symbols depicting beer and gold coins. Like most Eyecon slots, however, there’s little in the way of sound. While some Irish-themed games will include a Celtic folk tune, Irish Luck focuses more on the visuals. You’ll hear a small sound effect when you spin the reels, and a short but exciting jingle plays when you get a winning combination - that’s your lot, however.

Following the pot of gold

If you want to get to the end of the rainbow, there are 25 different paylines to remember. You can spin with as many of them active as you like, or as little as just one - it’s up to you. As a result, you can spend from just 1p to £50 on any spin. The four-leaved clover symbol substitutes for all symbols apart from the two scatter symbols, and doesn’t pay out on its own but does double prizes when it appears in a line win, Scatter wins are multiplied by the total wager, unlike the rest of the symbols, so you could get £50 from a £1 bet. The most valuable regular symbol is the tree filled with gold, and this will also get you £50 if you match five of them.

A feature you don’t often see in slots is the Word Combo feature, but it’s right here in Irish Luck! There are five letter symbols, each one depicting a letter from the word ‘Irish’. Get a combination of these on an active payline from left to right, and you’ll win - the maximum prize is three times that of the maximum prize for matching the tree filled with gold, so you could get £150. Just get the symbols to spell I-R-I-S-H in order. Simple right?

Getting to the end of the rainbow

The jewel in the crown of Irish Luck might just be the Prize Pick feature. It’s triggered when three or more leprechaun scatter symbols appear anywhere, and you’ll be awarded one pick for each leprechaun you get. Each pick will reveal either a fairy or a leprechaun, and they both have different perks. Fairies will give you a reward of up to 100x your total wager, while leprechauns give you ten free games! Your prizes from each pick will be added together to form a cumulative reward - and then you can begin your free games if you’ve won any! During free games, all prizes are doubled, while they’re played with the same paylines and wager as the game in which you triggered them.

There’s also the Match & Win feature - you trigger this one by getting three or more fairy scatter symbols. You’ll be collecting clover leaves until you make a pair, thus ending the feature. For each fairy symbol in the winning combo, you’ll win the value of the matching pair multiplied by the total wager. Last but not least, we can’t forget about the gamble bonus. If you want to take a risk, the gamble bonus pays double or nothing on the final win! Just choose from two selections - if you’re right you can either take the win, keep gambling until you reach up to £32,000, or make a maximum of five correct selections. If you’re wrong, you’ll lose it all!

This slot might not have the drama and suspense that draws players to the most popular slots, but it’s worth a try for the bonus features alone. The Word Combo feature is a great touch, and the Match & Win feature offers something a little different too. You’ll feel right at home with the bright, happy visuals too, so there’s no reason not to give Irish Luck a go.

Eyecon originated in Australia over twenty years ago, but only began making slots in late 2017 when Fluffy Favourites arrived with a bang. Alongside Irish Luck and Fluffy Favourites are numerous slots, scratch cards and other games, including Beez Kneez and Beat the Bobbies. With so many popular games, it’s no surprise that Eyecon are one of the biggest names in online slots.