Join the gang of toys as they head to the fairground for more fun!

Eyecon’s incredibly popular Fluffy series now sees the gang of soft toys at the fair, where there’s plenty up for grabs and as many attractions as you could wish for across five reels and 25 paylines!

It might not be the first time we’ve met these characters, but Fluffy Fairground is just as enjoyable as its predecessors, this time with a change of scenery! Check out our review at the bottom of the page to see if it’s worth joining the gang at the fairground.

Deposit £10 or more at Buzz Bingo to claim a £60 bingo bonus, plus £20 in free spins. All winnings are yours to keep and uncapped! Play all the best slot games, like an Eyecon Gaming favourite Fluffy Fairground. This sequel sees the gang of fluffy toys head to the fairground for more spinning and fun!

Sign up, deposit and spend £10 using the promo code V30 to get 30 free spins on the hit Eyecon slot, Champions of Valhalla. Or try your hand at Eyecon's hit series Fluffy with Fluffy Fairground. The gang makes a trip to the fairground for more fun with the fluffy toys! MrQ has zero wagering requirements, so everything you win is yours to keep.

Spin your way to a win of up to 500 free spins on the Mega Wheel when you sign up to bgo Casino. Play all your favourite online slot games, including Fluffy Fairground, the sequel to the top Eyecon Gaming slot Fluffy Favourites!

Mecca Bingo is not just for Bingo! Find all the best slot games including the super cute and colourful Fluffy Fairground! Join the soft toys as they explore the fairground and spin your way to a win. Sign up and deposit £10 to claim 25 free spins. Try your hand at Bingo, slots, and casino games with one of the country's top trusted sites.

Wizard Slots offers slots fans over 400 games to play, including all your current favourites and your next favourite too. By depositing £10 and spinning the Mega Wheel, new players can win a variety of prizes. If you're lucky enough you may even win 20 free spins on Fluffy Favourites! Or, join the gang in a different setting as you spin to win at the fair in Fluffy Fairground!

Are there free games in Fluffy Fairground?

Yes - three, four or five scattered elephant symbols will award 15, 20 or 25 free games respectively. They are played using the same paylines and wager as the triggering game, and can be triggered a maximum of 15 times. All line win prizes are tripled during free games too.

What is the Prize Pick feature?

What is the gamble bonus in Fluffy Fairground?

In Fluffy Fairground, the gamble bonus pays double or nothing on the last win. To win, you just need to select the correct choice of two you’ll be presented with. Every bonus round is an independent event. 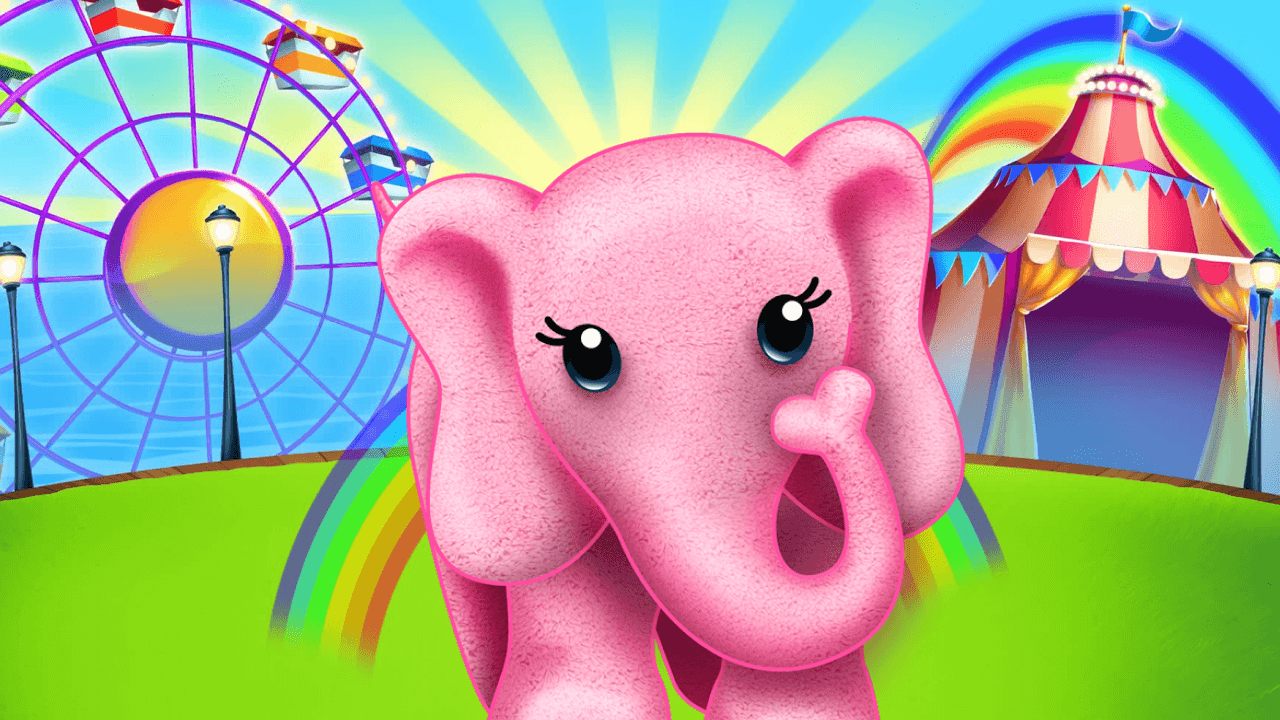 Everyone loves a stuffed animal - even if they won’t admit it - so it’s no surprise that Fluffy Fairground and the other slots in the series are so popular. Now in a fairground, with the bonus features you expect from Fluffy games and familiar faces too, Fluffy Fairground has a lot to tempt you in, but is it worth giving this sequel a go? Read on here to find out...

Sights of the fair

If you’re familiar with the other games in the series you’ll instantly feel at home with the bright, cartoon designs of this slot. There’s a background of a big top and a ferris wheel in front of a bright blue sky complete with a sun, clouds and a rainbow. Meanwhile, the remaining half of the background is a vibrant grassy field, so there’s a real mix of colours. The symbols are all friendly-looking cartoons, and you can tell that they’re stuffed toys - perhaps they’re up for grabs at the fair?

Like many other Eyecon games, sound isn’t utilised in the same way as the visual aspects of the slot. Some fairground-style music in the background might have been a nice touch, but rather than any sort of music or soundtrack we’ve got the standard Eyecon sound effects, which you’ll hear when you spin the reels and get various wins. However, the graphics are of the impressive quality we know Eyecon offer, so they do enough to outweigh the lack of soundtrack.

Fluffy Fairground has a standard play board with five reels each containing three symbols, and 25 paylines in total. There are two scatter symbols here, but the scattered elephant symbol doubles as a wild symbol, so it substitutes for all symbols apart from the scattered big-top tent symbol. When it appears in a line win, it’ll double your payout too - this elephant never forgets to multiply your winnings! Scatter wins pay any, and they’re multiplied by the total wager too.

There are ten different regular symbols here, and there’s a range of value between them. The least valuable are the duck and clownfish, followed by the rhino and giraffe, then the tortoise and lion. The next-most valuable are the panda and monkey, and then the dragon. The most valuable of all is the hippo symbol. Line wins are all multiplied by the wager per payline, and pay left to right across the 25 paylines here.

It’s difficult to turn down free games at the fair, so you’ll be in for a treat if you win some on Fluffy Fairground! Just get three, four or five scattered elephant symbols and you’ll win 15, 20 or 25 free games respectively as a result. All free games will be played using the same paylines and wager as the triggering game, and they can be retriggered a maximum of 15 times altogether. Moreover, your prizes for matching symbols will be tripled during free games, so imagine how much you’d win if you matched five hippo symbols!

As great as free spins are, you can’t forget about the Prize Pick either! To trigger it, you just need three or more scattered big-top tent symbols anywhere on the play board at once - you’ll get one pick for each symbol. Each Prize Pick can get you up to 100x the total wager, and all Prize Pick wins are added together. If you feel like taking an extra risk, you can make use of the gamble bonus feature too. It pays double or nothing on the last win, and to win all you need to do is just select one of two choices and choose correctly - there’s a 50/50 chance of success! Each bonus round is an individual event.

If you’re already a fan of the Fluffy slots, you’re sure to enjoy this one too. However, there’s something here for all players - Eyecon’s great graphics and fun characters make it a good place to hang out for a while, and the bonus features look great. With opportunities to double and even triple line wins if you’re lucky, and an average RTP of 95.388%, there’s no reason to say no to Fluffy Fairground!

Australia’s Eyecon have been around since 1997, but only began to make slots in 2017 when the ever-popular Fluffy Favourites made its first appearance. The Fluffy series has remained popular with players and Fluffy Fairground is just one of a few in the range. However, Eyecon can boast plenty of other slots too, including Beat the Bobbies, Autumn Gold and Beez Kneez.