Can you find the elusive Yeti and win big?

Have you seen the Yeti? This Thunderkick slot transports players to the snowy Himalayas and is based on the legendary monster, though with a bonus game on offer, is he really that formidable?

It’s one of Thunderkick’s newest slots, but could fast become a favourite with players due to some vibrant graphics, exciting bonus features and a fun theme - why not see what the Yeti has to say? Check out our review below to find out more about this new arrival to the Thunderkick family.

Join Bet365 Casino and get access to the best online slots on the market, including Yeti, the game that hunts down the elusive creature. See if you can find the monstrous creature and win big. New players can claim a 100% bonus up to £100!

MrQ was the first online bingo site to offer absolutely no wagering across all of its promotions. New players can deposit and spend £10 to claim 30 free spins on Starburst, with all winnings paid in cash! Or try your hand at the winter themed Yeti and try to find the elusive creature.

Thunderkick hits the mark with yet another visually stunning online slot game. Try your hand at Yeti and see if you can seek him out. With a 100% match and £30 bonus, 888casino is a top choice for an online casino, with everything you could ever want to play on offer.

Sign up to SlotsMagic using bonus code BOOK75 to claim 75 free spins and up to £100 bonus cash. Enjoy a great range of Thunderkick games at SlotsMagic including Yeti and find out why this online casino truly is magical for all you slot lovers out there!

PlayOJO is currently killing the online casino game. From online slots and now bingo, it's got everything you could want from an online casino all in one place. Try your hand at Thunderkick's Yeti and voyage across the Himalayas searching for your big win! Up to 50 wager spins at PlayOJO make this offer even more enticing.

Does Yeti have a bonus game?

What is the sticky wild feature?

Sticky wild symbols appear during the Wild Attack feature and bonus game. When one occurs, it will lock into position and remain sticky for the rest of the game round, or until it forms part of a winning combination.

What's the RTP of Yeti?

Yeti’s RTP, or return-to-player, is 96.1%. This is considered to be around average when compared to other online slots. Meanwhile, this Thunderkick slot has medium volatility, meaning that although you still have the chance of getting larger wins, there's less of a risk than you have when playing games with higher volatility. 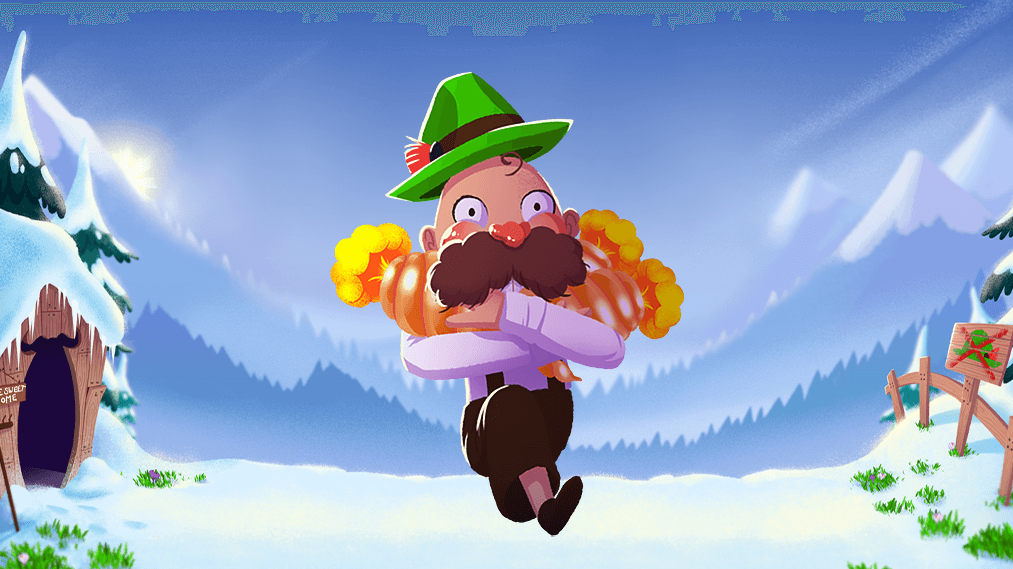 A new adventure from Thunderkick, Yeti puts a unique spin on the folk tales of the mythical creature as we’re right in the icy Himalayan mountains. With eye-catching graphics and some interesting bonus features, it’s a slot that has a lot of appeal, but does it live up to expectations? Keep reading to get our verdict on this new online video slot...

Make no mistake, this is a game that looks good. Full of ice-cold blues and whites, the background is that of a mountain, where nobody resides but the Yeti themselves. We see it make an appearance on the playboard, this cartoon character looking rather more mischievous than ferocious, and there are some glowing fruits too - it can’t be often that the world’s highest mountains see fresh fruit. Then, there’s also a curious moustached fellow in a green hat as the wild symbol, and it doesn’t look like he’s allowed in these parts, so there’s something to keep an eye on there.

The sound effects here are put to good use too. There are a couple of eerie voices - perhaps one is the Yeti - and what sounds like snowfall. A jingle plays when you spin the reels too, and together these sounds combine to provide a wholly more immersive experience - it feels like a lot of thought has been put into the sights and sounds here, and that’s what we look for in a game.

Working up the mountain

With five reels, Yeti feels like a fairly standard slot. However, 11 paylines might be a bit of an unconventional number - that said, the paylines are all fairly normal, and there’s nothing too out of the ordinary here. You’ll be used to playing slots with five reels and 15 symbols on the play board in total, so normality is the order of the day.

There are a number of different symbols here, beginning with the simple J, Q, K and A - these will win you a maximum of £3.50 from a £1 bet - and then a few types of fruit. There’s then the Yeti itself, and the Wild symbol too, and these both pay out some fairly big sums if you’re fortunate enough! The Wild symbol also substitutes for all paying symbols, so might come in handy as you keep spinning the reels.

Don’t be frightened of the Yeti - even if it attacks. Get two Bonus symbols on the reels to trigger the Wild Attack, while even more will trigger the Bonus Game. When you get a Bonus symbol, you’ll move up a step on the Wild Attack meter, and every three Bonus symbols will award you a random Sticky Wild too, also giving you an extra two Free Spins! Get the full meter and you’ll have another 5 Free Spins - the maximum you can obtain is 31, so that’s an awful lot of spins that could be coming your way!

3 Bonus symbols will get you 10 Free Spins, while 4 get you 15 and 5 award you 20. Should you get the Wild Attack feature, you’ll enter the respin with an additional 1-3 Sticky Wilds - when it’s triggered, all Wild symbols not on winning paylines will become sticky, locking into position until the game round ends or they form part of a winning payline!

There’s plenty to do in this Thunderkick slot, and if you like bonus features relating to Wilds, and Free Spins too, you’ll probably enjoy it. With an average RTP and volatility, it’s a decent option for all players, and it has good graphics too. If you prefer a stronger, more immersive and less jovial theme, you may want to look elsewhere, but if not this is a perfectly good slot to try out.

Well known in the slot gaming world, Thunderkick has numerous games in their locker. Alongside Yeti are other games featuring mythical monsters from around the world, so check out their Beat the Beast series, as well as other popular slots like Pink Elephants 2, Toki Time and The Rift. Since being founded in 2012, this Swedish firm has come on leaps and bounds, firmly establishing themselves as an industry leader.