Will this frog Prince leap his way to a big win?

Eyecon’s Enchanted Prince takes on a classic fairy tale theme, the titular Prince being a frog. There’s a whole load of regal symbols to find across 5 reels and 25 paylines, and free games too! Enchanted Prince might not be a big name, but it’s royally fun and isn’t too difficult to get the hang of. If you think you might have found your Prince Charming, check out our review at the bottom of the page.

NetEnt casinos are one of the top providers and for good reason. Featured games include the fairytale slot game, Enchanted Prince. New players to Touch Mobile Casino can sign up and claim up to £200 cashback, from their desktop or on the go on mobile.

Play Enchanted Prince at MrQ with absolutely no wagering requirements on any of its offers. MrQ has hundreds of slot games from all the top providers - you'll be spoiled for choice. New users can sign up and deposit £10 to claim 10 free spins on Stampede.

Spin your way to a win of up to 500 free spins on the Mega Wheel when you sign up to bgo Casino. Play all your favourite online slot games, including Enchanted Prince, the faitrytale themed slot that will have you falling in love with the frog prince if you win!

Mecca Bingo is not just for Bingo! Find all the best slot games including the magical Enchanted Prince from Eyecon Gaming! Sign up and deposit £10 to claim 25 free spins. Try your hand at Bingo, slots, and casino games with one of the country's top trusted sites.

This Prince doesn't live in a castle - or a mansion! Why not try your hand at this magical slot and see if you can get the frog-prince to croak out a big win. Sign up and claim a 100% bonus at Mansion Casino.

What is the Gamble Bonus in Enchanted Prince?

The Gamble Bonus will pay out double or nothing on the last win when activated. All you need to do to win is correctly select one of two choices - play will continue until either you decide to take the win, your next win would be larger than £32,000, you make a total of five correct selections, or you make an incorrect selection.

Are there free spins in Enchanted Prince?

Yes. You can trigger free spins by getting three, four, or five scattered frog symbols on the play board simultaneously, and they’ll get you 15, 20, or 25 respectively. Free spins are played using the same paylines and wager as the triggering game, and can be retriggered a maximum of 15 times.

What's the return-to-player of Enchanted Prince?

The return-to-player, or RTP, of Enchanted Prince is 94.995%, which is on the lower side of average - as a result, you can expect to receive just under a 95% return on what you wager. However, it’s a low-to-medium volatile slot, so it’s not too risky; it’s suited to less-experienced players too. 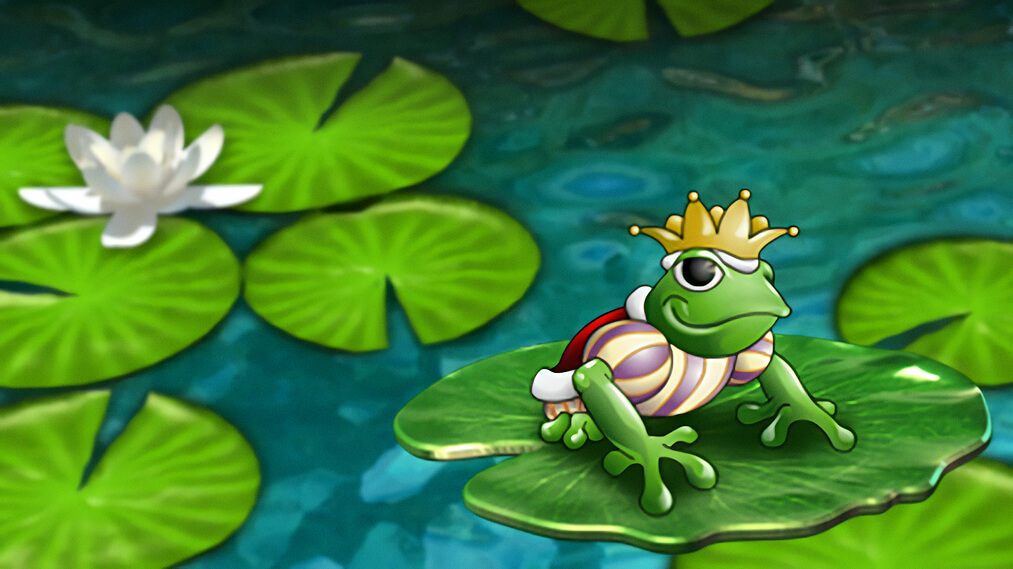 Step into the magical world of princes, princesses and once-upon-a-times with Eyecon’s Enchanted Prince! Though he’s a frog, he’s vying for the affections of the beautiful princess - will they get together and rule over this kingdom for evermore? There’s no Fairy Godmother, but you might still be granted free spins and other treats in this blissful slot - keep reading on to find out if it’s a Sleeping Beauty or an Ugly Sister...

Bright and cheerful, this slot combines fairy tale magic with a frog theme to great effect. Upon a background of lily pads floating on swirling turquoise water, you’ll see majestic letters and picturesque symbols, from the frog prince himself to the princess, and of course the grand castle, standing tall above the trees and fields.

The graphics have a hand-drawn quality to them, rather than the more cartoon-like look common in a lot of newer slots. They mimic the traditional illustrations present in fairy tales themselves, and it really adds to the theme. However, like most video slots from Eyecon, there’s little in the way of sound. Whether this is a benefit or drawback is of course largely a matter of personal opinion, but truthfully it doesn’t feel like a great loss - the graphics are more than enough to immerse us into this magical world.

It won’t take those with less experience very long to get their head around the workings of this Eyecon slot. There are five reels, each with three symbols, and 25 paylines in total. When deciding on your wager, you can play with as many or as little paylines as you like, up to this number, and they all go from the leftmost reel rightwards. The RTP, or return-to-player of Enchanted Prince is 94.995%, which is around average, but there are plenty of slots with higher percentages. This slot has low-to-medium volatility, meaning that frequency of wins is slightly prioritised over size of wins - there’s a lower risk here.

Look out for the frog prince - the scatter symbol, he pays out too, and wins here are multiplied by the total wager. If you get five scatter symbols, you can win £50 from a £1 bet! However, there are quite a few other symbols to have a look at. The most valuable is the princess, as you could win £96 from the same £1 bet, but the castle, heart, water lily and lily pad symbols are also worth looking out for too.

Going into the wild

Free games are the main bonus feature on offer here, and you’ve got every chance of activating them! You just need to find three, four or five scattered frog symbols anywhere on the play board at once, and you’ll receive 15, 20 or 25 free games respectively. You can retrigger them a maximum of 15 times too, while they use the same paylines and wager as the triggering game. Meanwhile, there’s a wild symbol too, in the form of a crown. The crown symbol substitutes for all symbols apart from the scattered frog symbol, and when it appears as part of a winning combination it will double the win!

However, there’s also a Gamble Bonus, if you’re feeling particularly ready to take a risk. It pays double or nothing on the last one, and all you need to do to win is pick the correct selection when you’re faced with two. The Gamble Bonus will continue until either you decide to take the win, your next win would exceed £32,000, you make five correct selections, or you get a selection wrong. Each bonus round is an independent event, so feel free to back out whenever you like!

Enchanted Prince won’t be the most thrilling game you’ll play, but if you’re looking to get lost in something a little more slow-paced, it could well fit the bill. The RTP of 94.995% might not be eye-catching, but the low-to-medium volatility makes this slot suitable for less-experienced players and those looking to avoid too much risk - the gameplay and bonus features are pretty standard, so this is definitely one for fans of classic fairy tales in particular.

Eyecon originated in Australia just over 20 years ago in 1997. They began providing video slots in 2017, and have produced numerous games in the three years since. Their slots have a variety of themes, so there’s something for everyone - alongside Enchanted Prince are games like Beez Kneez, Autumn Gold, Secret Garden, and the ever-popular Fluffy Favourites.