Explore with Rich Wilde as you discover the Book of Dead

Play’n Go’s Book of Dead is a slot for the intrepid among us, as we dive straight into Ancient Egypt with our fearless explorer Rich Wilde and check out the famous Book of Dead. Wilde will take a trip through ten paylines and five reels, with expanding symbols and free spins on the way too!

Wilde is Play’n Go’s resident globetrotter, having appeared in other slots like Pearls of India and Aztec Idols, but this could be his most exciting adventure yet. Will you join him in his quest? Check out our review to find out all you need to know.

Join BetVictor today and wager just £10 to claim £90 in casino bonuses to be used on a range of games. BetVictor have over 700 games on offer including slots, table games and progressive jackpots. Try out Book of Dead and see if you'll uncover the hidden riches of Ancient Egypt!

Karamba offers slots and casino fans a 3 part welcome bonus that includes a £50 deposit match bonus plus 100 free spins, awarded over 3 deposits. Those spins can be used on any one of the qualifying games, including Phoenix Gold! Play casino games, live casinos and bet on sports games on Karamba. Why not try out Book of Dead from Play'n'Go Casinos and see why Rich Wilde is now exploring Ancient Egypt for hidden treasures.

This Play'n'Go Casino slot has you exploring the buried riches of Ancient Egypt with Rich Wilde. See if you can uncover something big. Try out Book of Dead at Videoslots and claim a £200 bonus when you sign up.

Over 18s and new players only.
playTemple Slots Review

While this casino might be temples galore, this slot is pyramids galore. Explore the pyramids of Ancient Egypt in this Play'n'Go slot and see if you camn dig up some treasures. New players to the site can claim 150 spins and £150 bonus cash, so why wait?

Over 18s and new players only.
playProspect Hall Review

Join Prospect Hall Casino and claim up to £300 bonus cash across your first three deposits, plus get 100 free spins. You can use your bonus on hundreds of slot, table and live casino games including Play’n Go’s popular slot Book of Dead. Journey through the wonders of Ancient Egypt as you uncover untold secrets and riches galore!

Are there free spins in Book of Dead?

Three or more scattered books trigger free spins. An initial ten will be awarded to begin with, and before the free spins begin a symbol will be chosen at random to become the special expanding symbol for every free spin round. Once prizes have been recognised for regular line wins, this symbol can expand to cover every position on its reel, potentially extending winning combinations and increasing your winnings

What’s the gamble round in Book of Dead?

Book of Dead’s gamble round is optional, and gives you the chance to multiply the total prize on any main game spin. All you need to do is guess the correct colour or suit of a hidden card - get it right and you win. The gamble round can be played for up to five times in a row.

How volatile is Book of Dead?

This Play’n Go slot is a high volatility slot. This means that wins can be high, but you can expect to see them less often. As a result, it’s more risky and might be better suited to more experienced players. The RTP, or return-to-player, is 94.25%, which is a little lower than average, however. 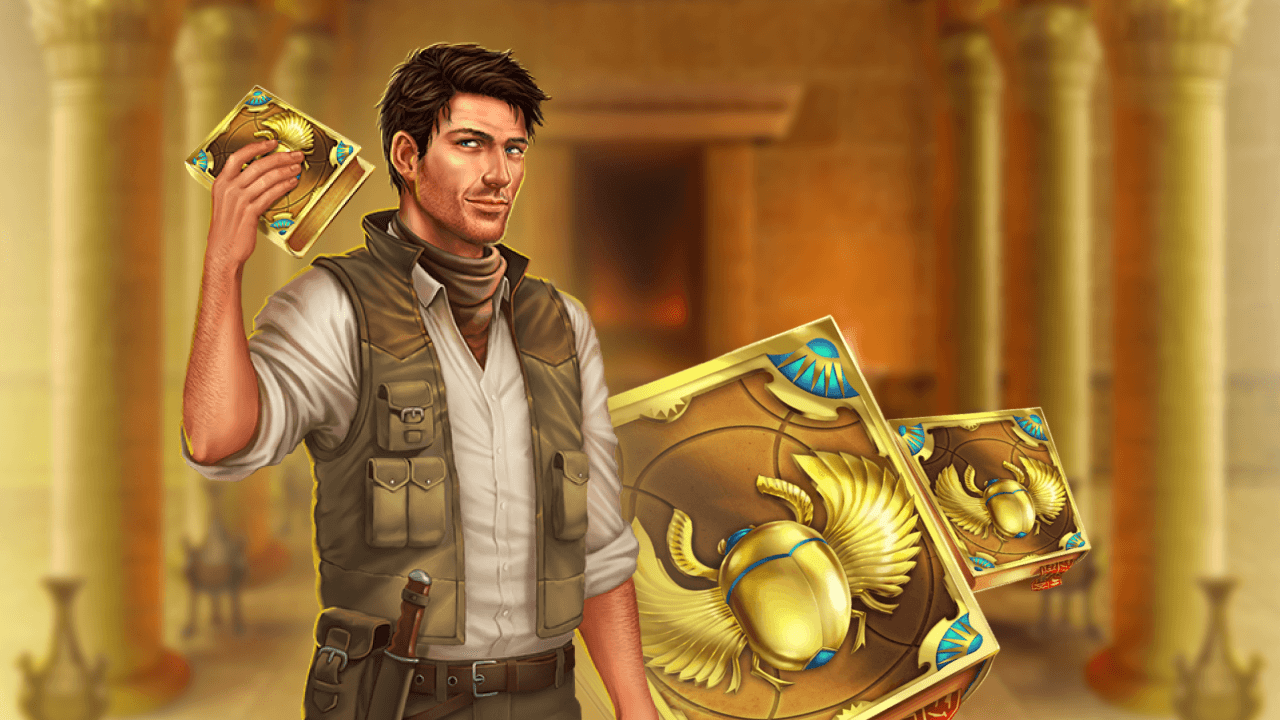 Book of Dead sees Play’n Go combine the popular Ancient Egyptian theme with their explorer character Rich Wilde, putting them together for a fascinating North African expedition. With high volatility and the potential for some exciting free spins, this slot sounds as risky as Wilde’s latest exploit, so it might be one for more experienced players - you could be in line for some big wins, so should you give this slot a go? Keep reading to find out...

Reading the Book of Dead

It looks like we’re at the part of the adventure where Wilde arrives at what looks like a mausoleum, and the graphics here are outstanding. The intricate detail on the building showcases various hieroglyphs and symbols, and everything looks very fancy indeed, covered in gold to give the game a warm glow.

The symbols are all bright and colourful - just like the background, a lot of detail has gone into making these look realistic, and it works. The Book of Dead logo at the top flashes too, and there are a couple of animations on the landing page before you begin, in which some of the features are described to you - overall, it’s impressive. As for the soundtrack, there’s a tense, foreboding drum beat typical of adventure movies like this, as well as a Middle Eastern tune playing, so it’s all rather immersive.

Book of Dead has five reels, but just ten paylines - all the standard combinations you’d expect to see. As a result, this slot is quite volatile, and wins are likely to be less often but larger instead of little and frequent. There are a few low-value symbols, and these are all the numbers and letters found on playing cards. However, the high-value symbols pay out at quite a bit more - there are three Egyptian-themed symbols, and then Rich Wilde himself, the most valuable of the lot.

The book symbol acts as a wild, and can substitute for any other symbol to form part of a winning combination. It pays out too, but as it's also a scatter symbol, all wins are multiplied by the total bet. For this reason, from a £1 bet you could win up to £200 here. The return-to-player of Book of Dead is 94.25%, which isn’t obscenely low but still a little on the low side, so you can expect a slightly lower return than on some other similar slots.

To win free spins, you just need to find three or more of the scattered book symbols - as well as winning money from that you’ll also get your free spins! You’ll start off with ten free spins to use, and there’s a special expanding symbol too. Before you begin your free spins, a regular symbol will be randomly chosen to act as the special expanding symbol for the entirety of the free spins. When this happens, the special symbol can expand to cover all three positions on its reel when additional prizes can be awarded along active paylines.

Should you get three or more scatter symbols while playing your free spins, you’ll win an extra ten! However, if you’re back in the base game there’s still the gamble round, if you feel like it. Here, you can multiply the total prize on any base game spin by guessing the colour or suit of a hidden card. Get it right, and you win! The gamble round can be played up to five times in a row.

Play’n Go were the first provider to make the move into mobile gaming, and it’s no surprise as they have a track record of setting trends and being creative. They’ve been making games since the 1990s, but still manage to come out with innovative slots with engaging themes. Alongside Book of Dead, you can try another 120, including Riddle Reels, Reactoonz and Irish Gold.

There’s a lot to like about this Play’n Go slot, from the graphics to the free spins and potential big wins, but the high volatility and low RTP might put some players off. However, if you’re willing to take the risk, this is a game that you’re sure to enjoy - particularly if you get into the bonus round...