Will this sequel slot delight you? Try Fluffy Too and find out

The cast of Eyecon’s much-loved Fluffy Favourites are back in Fluffy Too, the sequel taking them all to the beach! There’s a real seaside amusements feel, with the Coin Pusher feature on top of free games and of course some regular wins too.

Part of one of the most popular slot series out there, Fluffy Too looks friendly and inviting but has some great features and enough to make it stand out from its predecessor - check out our review of this Eyecon slot down below.

Mecca Bingo is not just for Bingo! Find all the best slot games including the super cute and colourful Fluffy Too! Sign up and deposit £10 to claim 25 free spins. Try your hand at Bingo, slots, and casino games with one of the country's top trusted sites.

Wizard Slots is the home of free spins. Not only can you win up to 500 spins on Starburst when you make your first deposit, but all additional £20 deposit will also unlock a spin on the exclusive Mega Reel bonus. All funded players can claim up to 20 free spins per month. Why not try your hand at Eyecon's sequel slot Fluffy Too and see if the cute slot will lead you to a big win.

Spin your way to a win of up to 500 free spins on the Mega Wheel when you sign up to bgo Casino. Then try out the gorgeous Fluffy Too, sequel to the immensely popular Eyecon Gaming slot Fluffy's Favourites. Will the reels packed with pastel teddy bears lead you to a big win?

Give Fluffy Too a try, the sequel to the popular Eyecon gaming slot, and see if these fluffy teddies and cute icons will delight you. At MrQ there are absolutely no wagering requirements on any of its offers and with hundreds of slot games from all the top providers you'll be spoiled for choice. New users can sign up and deposit £10 to claim 10 free spins on Stampede.

Deposit £10 or more at Buzz Bingo to claim a £30 in-club and online bingo bonus, plus 10 free spins. All winnings are yours to keep and uncapped! Play all the best slot games, like an Eyecon Gaming favourite Fluffy Too. This is one sequel slot that is just as good as the original - if not better!

What is the Coin Pusher feature in Fluffy Too?

The Coin Pusher feature is triggered when three or more scattered coin symbols appear anywhere on the play board. You’ll be awarded one pick for each scattered coin symbol, and each pick will get you a prize of up to 100x the total wager. Then, prizes awarded are all added together.

Are there free games in Fluffy Too?

Fluffy Too does have free games, and you trigger them by getting three or more scattered elephant symbols anywhere on the play board. All line win prizes are tripled during free games, and they can be retriggered a maximum of 15 times. Free games are played using the same paylines and wager as the triggering game.

Does Fluffy Too have a gamble bonus?

There is a gamble bonus in Fluffy Too. It pays double or nothing on the last win. To win, you need to select one of two available choices, and get it right. Each bonus round is an independent event. 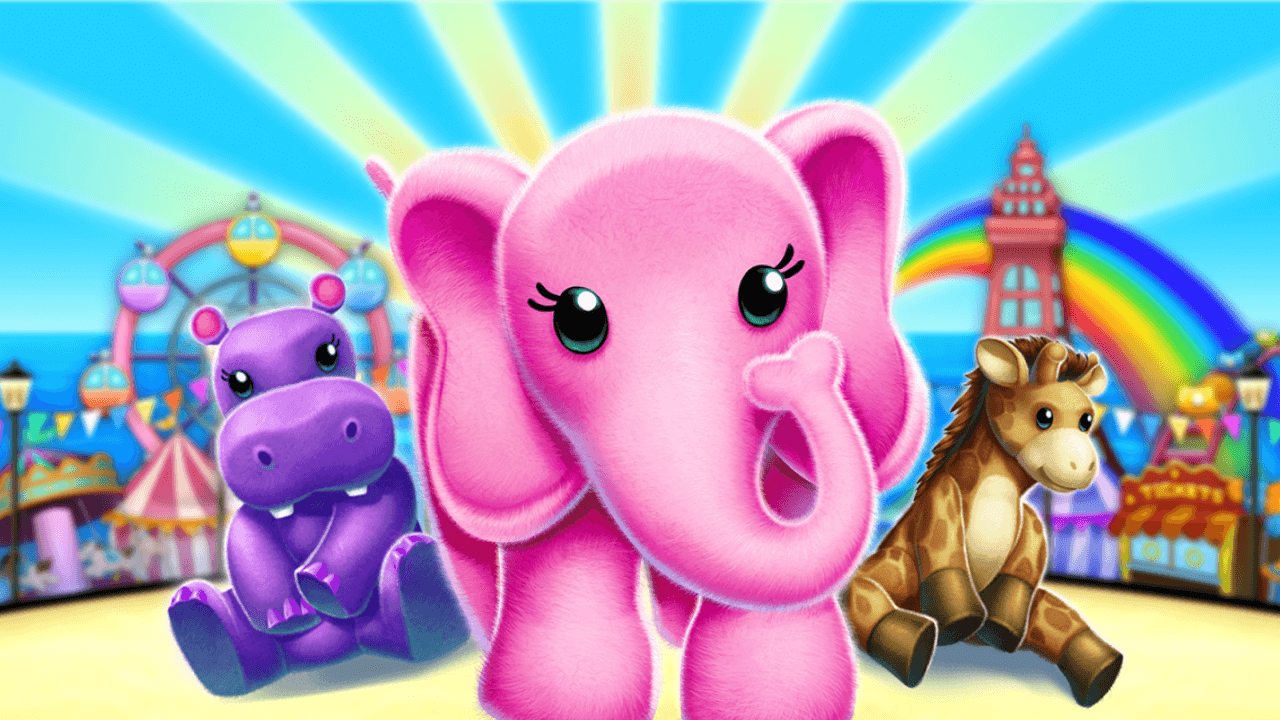 Fluffy Too is following in the footsteps of the original Fluffy Favourites in becoming a popular Eyecon slot, and it’s easy to see why as the cuddly toys we know and love have jumped ship to the coast! You might think it looks too similar to its predecessor but there’s enough here to make it its own game, so should you play Fluffy Too too? Keep reading to find out...

The visuals here are quite pleasant and cheerful - there’s a picturesque cartoon beach background, full of sand, sea and sky. Alongside these are some fairground-style amusements, all in different colours, and there’s a rainbow too to really brighten up the sky. The symbols are all various cuddly animals - you’ll recognise them if you’ve played Fluffy Favourites in the past - and they’re again a variety of colours. They all look soft and friendly, from the hippo and rhino to the clownfish and duck.

Fluffy Too is an Eyecon slot, and Eyecon slots don’t often have much of a soundtrack. This proves to be no exception. You can expect sound effects when you spin the reels and when you match symbols, but that’s all. As a result, this could be a good fit if you prefer other background noise while playing. The focus here is definitely on the graphics, and we can see why as they are certainly impressive with intricate detail on the seaside scene.

Fluffy Too has 25 paylines and five reels. However, you can play with as many or as few paylines as you like, and as a result you can place bets from just 1p to £50 per spin. The elephant symbol is a wild symbol, substituting for every other symbol apart from the scattered coin symbol, and when it appears in a line win, prizes are doubled. There are many other animal symbols, however, and they range in value from the clownfish and duck at the low end of the scale right up to the hippo, who sits proudly at the top.

Line wins are multiplied by the wager per paylines, and all lines pay from the leftmost reel rightwards. The RTP, or return-to-player, of this slot is 95.388%, so you can expect your return to be about average. However, it has fairly high volatility, so you can expect wins to be larger but a little less frequent. In terms of the paylines, they’re largely what you’d expect from a 25-line slot, and there are three symbols per reel for 15 symbols on a full play board.

There’s all the fun of the fair with the features on offer here. Transport yourself back to childhood summers spent pushing 2p coins at the arcade with the Coin Pusher feature - it’s triggered when three or more scattered coin symbols appear anywhere. You’ll be awarded one pick for each coin symbol, and each one can get you a prize of up to 100x the total wager. Then, all prizes awarded will be added together for your total win!

To trigger free spins, you need three or more elephant symbols, which double as scatter symbols too. All line wins are tripled during free games for three times the fun, and they can be retriggered a maximum of 15 times - free games are played using the same paylines and wager as the triggering game. There’s also a gamble bonus, if you choose it. It pays double or nothing on the last win, and to win you just need to choose correctly out of two selections. Get it right, and you’ll double the win. Get it wrong, and you lose.

Fluffy Too has a lot to live up to, but it manages to do so with the fun and friendly graphics we’re familiar with, and some good features too - the Coin Pusher is a nice touch. There’s not much to find fault with - the high volatility might not be ideal for less experienced players, and some seaside-themed music would have been good, but overall this is another impressive slot from Eyecon.

From Australia, Eyecon have only been making slots since 2017 but were around for another 20 years before that. They began with the classic Fluffy Favourites, before branching out into this sequel, and of course plenty of other slots like Beez Kneez, Beat the Bobbies and Autumn Gold too. However, the Fluffy Favourites series is perhaps still their flagship product!