Based on the famous video game, will this slot challenge you?

NetEnt’s Street Fighter II is an entertaining slot that utilises the Cluster Pays mechanism, and it’s based on the famous series of games - you can now give them a go in slot form! Branded slots like this one can be a mixed bag, but this impresses with unique features and quirks.

It’s one of NetEnt’s newer releases, but has certainly arrived with a bang. Should you give Street Fighter II a go? Check out our review down below to find out.

Join Novibet today and deposit to double your cash with a 100% welcome bonus to play your favourite casino games. Choose from popular slots like Street Fighter II as well as live dealer table games. Will this slot game based on the hit video game series push all your buttons?

Over 18s and new players only.
playO'reels REVIEW

O’Reels is home to hundreds of slot, casino and jackpot games from the best game suppliers in the industry, so it makes sense it is one of the favourite online slot sites. Join and deposit up to £200 for a 100% welcome bonus plus free spins. Slot fans can include hit slots such as Street Fighter II, from NetEnt gaming, which will have you fighting to the very end for a big win.

Terms & Conditions: New Players Only. Wagering occurs from real balance first. 50X wagering the bonus or any winnings generated from free spins. Contribution may vary per game. Available on selected games only. The wagering requirement is calculated on bonus bets only. Bonus is valid for 30 days / Free spins valid for 7 days from issue. Max conversion: 5 times the bonus amount or from free spins: £/$/€20.

With thousands of casino games and slots on offer, Videoslots is one of the largest online casinos in the UK. Make your first deposit and claim a 100% match deposit, plus £10 extra cash. Play your favourite NetEnt slot titles including Street Fighter II, the slot game that's based on the hit video game series at Videoslots.

PlayOJO is a top online casino and for good reason. From online slots and now bingo, it's got everything you could want from an online casino all in one place. Try your hand at the cult classic video game branded slot, Street Fighter II, and see whether you can search out a big win! Up to 50 wager spins at PlayOJO make this offer even more enticing.

Join 21 Casino to claim up to £300 bonus cash to use across hundreds of popular casino games from top providers like NetEnt. VIPs are treated to up to £50 bonus cash every day which you can spend on your favourite slot games like Street Fighter II, the branded slot game.

What are Health Points?

Each character has a Wild Gauge that’s reset before each spin. It’s filled by one point for each high-value symbol that’s part of a winning combination. If there aren’t any winning combinations, but there are at least seven points in the Wild Gauge, your character will use their Wild Combo feature to put wild symbols onto the reels.

Are there free spins in Street Fighter II?

Yes. If you win your battle, you’ll trigger Beat the Boss Free Spins. There are four different levels, and each one has both a different opponent and a different multiplier, which will increase with each victory. Free spins can last indefinitely before you either lose or defeat M. Bison, the final opponent. If you get through it without losing, you’ll receive an additional reward of 100x your bet. 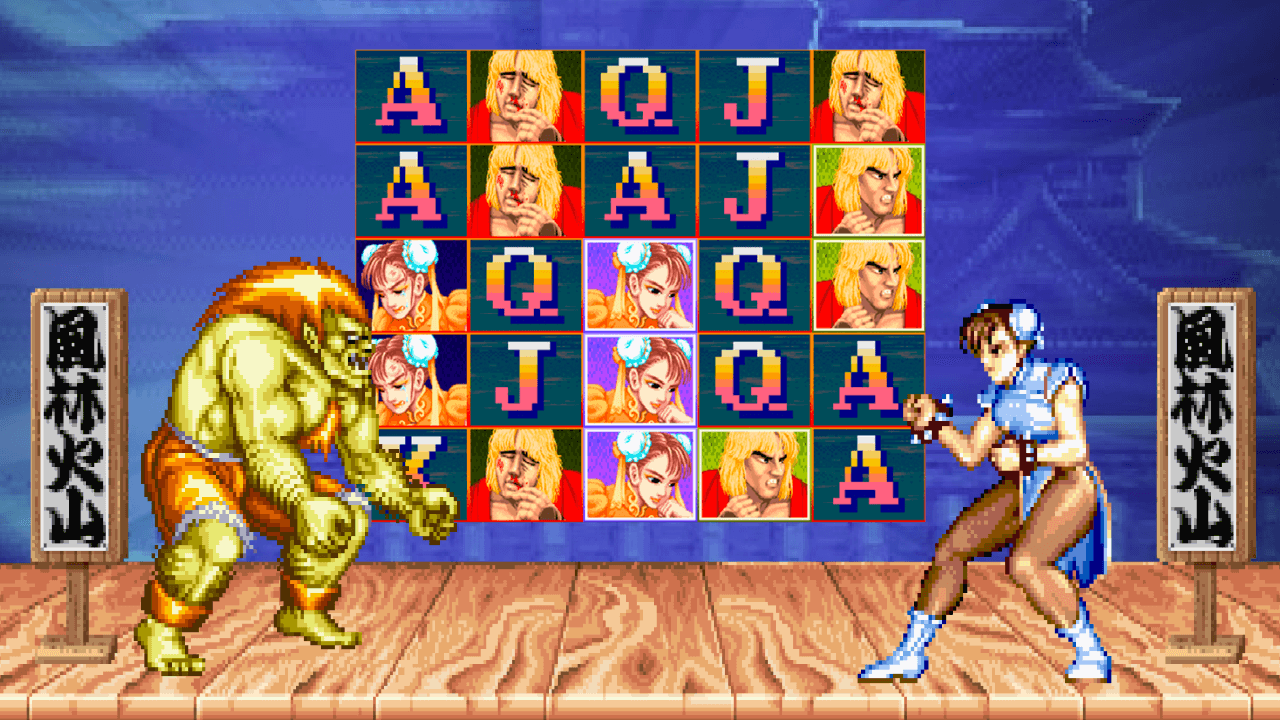 Street Fighter II is unlike any slot you’ve played before, with battles based on the Street Fighter games. You’ll get to choose who you play as, and if you’re successful progress through levels and potentially win the whole thing! Should you give this game a go? Keep reading to find out...

The sound of the Street Fighter

This slot is based on the iconic 1991 coin-op arcade game. As a result, there’s a retro feel with 8-bit graphics and familiar music and sound effects. If you’re a Street Fighter fan, you’ll instantly be grabbed by characters you recognise and colourful graphics that stay true to the game released almost 30 years ago.

Like in many slots, there are sound effects when you spin the reels and win money, and there are some animations too - this is a battle, of course, and you’ll see you and your opponent trading blows across the play board as your Health Points meters decrease in turn. Though in some ways the graphics might be a little simple, there is plenty going on here, and it’s almost blink-and-you’ll-miss-it territory so keep an eye out for everything!

First things first - you need to choose a character. There are eight classic characters to choose from, and your choice will impact the game’s volatility - the characters reside on a spectrum from frequent wins to big wins, so it’s up to you who you go for! In the first battle, you’ll be against another of the eight characters, and you both start with the full amount of Health Points. As you spin the reels, you’ll hope for clusters of symbols to give you winning combinations - when your victory or defeat symbols are part of combinations, you’ll deal damage to your opponent, but when their victory or defeat symbols are part of combinations, they’ll deal damage to you.

Bonuses and beating the boss

If you beat your opponent in the initial base game, you’ll enter into Beat the Boss Free Spins. There are four levels, each with a different opponent and their own multiplier. You’ll be fighting a different opponent on each level, and the multiplier increases with each victory, from x2 to x3, x5 and finally x10. Free spins can last as long as they need to until you either lose or defeat M. Bison, the formidable final opponent. Should you finish the free spins undefeated, you’ll win an extra prize of 100 times your bet too!

If you lose during free spins, you have a chance to try again, but it comes with a catch - the Insert Coin Gamble. You’ll have to sacrifice some of your winnings - and it can only be used once during each Beat the Boss Free Spins journey. However, should you not even make it to the free spins, losing in the base game, you’ll get to try your hand at the Car Smash Bonus Game. Here, you have to destroy a car, and if you do so you’ll be awarded a random win of between five and 15 times your bet.

It might feel a bit confusing at first, but if you stick with Street Fighter II, you’ll find that it’s a great game with plenty of thrills and excitement along the way. You don’t need to be a fan of the series to enjoy it either - sure, there are perks for fans, but the slot definitely has enough to hold its own by itself - particularly with the Beat the Boss Free Spins - this is definitely a slot to remember.

NetEnt are one of the most well-known providers, and the Swedish company has been around since 1996. They boast over 200 games altogether, from intricate branded slots like Street Fighter II to the classic Starburst, perhaps the most iconic ever. Other greats slots include Reel Rush and Gonzo’s Quest, but there are lots more to choose from.