Will Kong beat his mighty chest and dole out big wins?

Join King Kong in the jungle for the chance to win some cash in this slot from Blueprint Gaming - there’s plenty up for grabs here with some exciting bonus rounds and numerous animal characters to meet too as we see Kong having a nap in his throne, content with his role as King of this slot.

This game is a popular branded slot, with five reels and 20 paylines to manoeuvre - will you wake Kong and get him to pay up? You’ll have to play it to find out, but first, check out our review further down the page.

Over 18s and new players only.
playSun Vegas Review

Sun Vegas is the newest online casino from the same company that bought you the fantastic Sun Bingo, offering a mobile friendly design and a name you can trust. Try out your favourite slot games including King Kong Cash and enjoy a generous 100% match welcome bonus up to £300!

Terms & Conditions: 100% bonus up to £300 on your first deposit · New Customers Only · Min Deposit £10 · 50x WR ·  Offer must be accepted within 72 hours. Bonus Valid for 30 Days · Max bet restrictions apply · Bonus can't be withdrawn. Bonus can only be spent on Slot Games · Skrill/Moneybookers and Neteller are not valid for this promo · Real money balance can always be withdrawn.

Mecca Bingo is not just for Bingo! Find all the best slot games including the jungle themed King Kong Cash! Sign up and deposit £10 to claim 25 free spins. Try your hand at Bingo, slots, and casino games with one of the country's top trusted sites.

Deposit £10 or more at Buzz Bingo to claim a £60 bingo bonus, plus £20 in free spins. All winnings are yours to keep and uncapped! Play all the best slot games, like a Blueprint favourite Fishin' Frenzy.

Sign up to Vegas Luck and deposit £10 for a chance to win up to 500 Free Spin with the Mega Wheel! Play over 550 casino games including casino classics and your favourite Blueprint Gaming slots like King Kong Cash. Will Kong beat his chest and dole out a big win for you?

Join BetVictor today and wager just £10 to claim £90 in casino bonuses to be used on a range of games. BetVictor have over 700 games on offer including slots, table games and progressive jackpots. Play King Kong Cash and see if you'll go bananas for a big win!

MrQ has hundreds of slot games from all the top providers - you'll be spoiled for choice. And all with no wagering requirements! Players who verify their mobile phone number can claim 10 free spins on Midas Golden Touch. Or try your hand at King Kong Cash and see if you'll grab a big win that will have you going bananas.

If you get three or more bonus symbols on a spin, you’ll be able to enter the King Kong Bonus. Here, you can move up the ladder to win one of five different bonuses. There’s Barrel Blast, King Kong Trail, Empire Free Spins, Golden Kong Free Spins and Big Money Bonus on offer - you’ll have the chance to play one of these.

What other features are included in King Kong Cash?

The Sleepy Kong feature can be triggered randomly during any spin, and will activate one of five Monkey Modifiers. You’ll either get Banana Cannon Wilds, Golden Barrel Super Spin, Bonus Boost, Kong Respin or King Kong Streak.

How many paylines does King Kong Cash have?

King Kong Cash has a total of 20 paylines. There are five reels each with three symbols for 15 symbols across the play board. Line wins are multiplied by the value bet on the winning line, and scatter wins are added to any line wins.

How does the King Kong Jackpot work?

If a jackpot is what you’re after, don’t worry - with the Jackpot King Progressive Pot System, you have the chance to win a cash prize or progressive jackpot on any spin! There are three jackpots in all, from the Royal Pot and Regal Pot to Jackpot King. Jackpot King is the biggest, but as they’re local, jackpots will differ from casino to casino - just remember, it’s entirely at random, so you could get lucky... 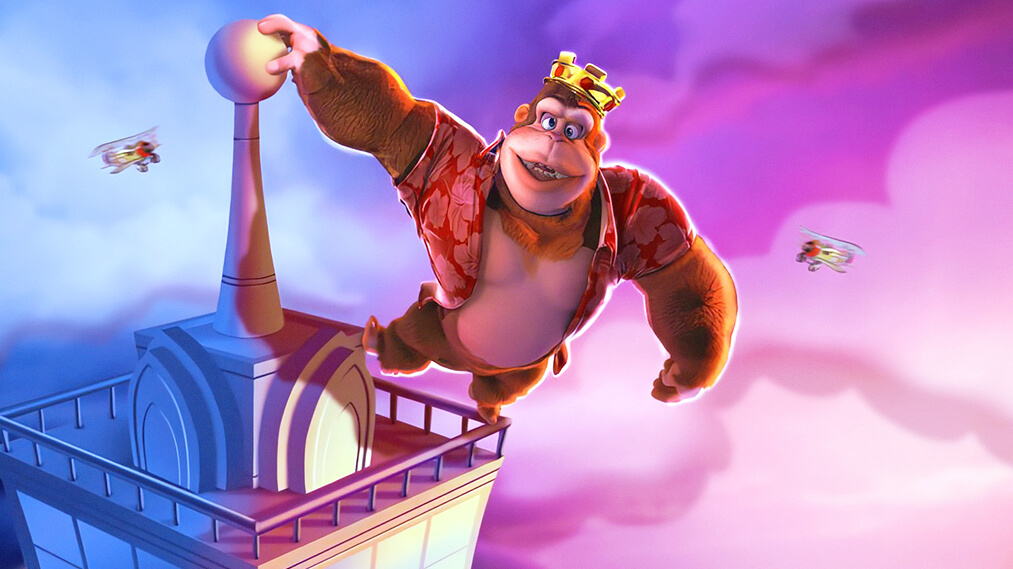 King Kong Cash is an entertaining slot provided by Blueprint Gaming, as it features the popular character sitting (and snoozing) atop his throne while you do your best to win some cash! There are enough bonus features to keep you occupied for days here, and with your potential bet ranging from 20p to £200, there’s something here for every player. Should you come down and meet Kong in this vibrant slot? Keep reading to find out...

As you might expect from a branded slot, the graphics in King Kong Cash are impressive. The jungle setting is bright and colourful, full of trees and treasure in cartoon form, as Kong himself sits asleep on his throne at the side of the play board. The other animals are anthropomorphic, their faces full of expression, and they look more friendly than you might expect for such wild beasts - the tiger, with his glasses and pipe, looks almost grandfatherly!

There are a few sound effects and animations to notice while you play, though the focus is more on the graphics than the audio here. That said, a fun tune plays while you spin, complete with bongo drums and plenty of rhythm to add an extra touch to the game’s personality; it’s a good fit, and doesn’t distract too much from your focus on the gameplay.

Monkeying around the play board

Kong’s play board is quite simple. There are five reels of three symbols each, and 20 paylines. All paylines are pretty standard, so you just need to match symbols in various combinations starting with the leftmost reel to win. The lower-value symbols are the letters appearing on a deck of cards, and the most you’ll be able to win on these is £5 from a £1 bet.

Once we get past these symbols, however, we can see that the animal symbols are rather more valuable - as is the King Kong Cash symbol, which could get you £25 from a £1 bet. The wild symbol also pays out at the same rate, while it substitutes for all symbols apart from the bonus symbol. The RTP, or return-to-player of this slot is 95.79% - around average - and it’s a medium volatility slot, so it strikes a balance between frequency of wins and quality of wins.

King Kong Cash is full of bonus features. There are plenty here to sink your teeth into, so you won’t be going without! If you get three or more bonus symbols on the play board at once, you’ll be awarded the King Kong Bonus - this comes in five different forms, and you’ll get one of them by moving up the ladder!

You’ll either take part in Barrel Blast, King Kong Trail, Empire Free Spins, Golden Kong Free Spins or Big Money Bonus. They’re all slightly different, but you’ll likely be in with a chance of winning money through some free spins or multipliers which are sure to make you go ape!

On top of the King Kong Bonus, there’s also the Sleepy Kong feature, which can trigger at random during any spin, and again give you one of five features - or Monkey Modifiers. You could win Banana Cannon Wilds, Golden Barrel Super Spin, Bonus Boost, Kong Respin or King Kong Streak - with the potential wilds, respins and extra symbols being added, there’s no reason to fear waking Kong up!

King Kong Cash is a great branded slot that fans of Kong are sure to love. The base game is simple enough to play, but the bonus features are attractive too and are sure to bring in plenty of players. The RTP and volatility of this slot might be average, but the graphics are anything but - this is a particularly visually-pleasing slot. If you like your branded slots but don’t feel like going for Megaways this time round, why not try out this fun-filled Blueprint game instead?

Blueprint Gaming, founded in 2001, are based in the United Kingdom but form part of the Gauselmann Group, a German company. They boast a lot of Megaways slots, including Return of Kong Megaways, and plenty of branded games too - Ted, Sausage Party and Beavis and Butthead all have slots provided by Blueprint. The studio might be relatively small, but is fast becoming a leader with over 80 high-quality slots on offer.