Games / Finn and the Swirly Spin

NetEnt’s Finn and the Swirly Spin might make you dizzy, but could also get you some big wins if the luck of the Irish rubs off onto you. It’s got a curious play board system, as it travels in a spiral, and you just need to match symbols horizontally or vertically across the spiral to win.

It’s full of bonus features, and has a perfectly reasonable RTP of 96.62%, so it’s no surprise it’s one of NetEnt’s more popular slots. If you’d like to find out more and potentially join the crowd on Finn and the Swirly Spin, check out our review down below.

Mecca Bingo is not just for Bingo! Find all the best slot games including the Lucky Irish Finn and the Swirly Spin! Sign up and deposit £10 to claim 25 free spins. Try your hand at Bingo, slots, and casino games with one of the country's top trusted sites.

Spins Royale boasts an extensive collection of slot games, including the fun Irish Finn and the Swirly Spin. New players can claim 30 free spins when they sign up and deposit £10. Why wait to start the fun?

One of the leading casino sites, Bet365 Casino has everything you could ever want on offer. Join a live casino table or try your hand at one of hundreds of hugely popular slot sites. See if you have the luck of the Irish and join Finn and the Swirly Spin. New players can claim a 100% Welcome Bonus.

Wizard Slots is the home of free spins. Not only can you win up to 500 spins on Starburst when you make your first deposit, but you can also try your hand at the immensely popular Finn and the Swirly Spin. Why not see what the fuss is all about?

Finn and this slot will make your head spin! With a swirling board, gems galore, and the gorgeous rolling hills of Ireland this slot is sure to delight. Will you reach the end of the rainbow? With Mansion Casino you can clam a 100% bonus up to £500. That's not an offer to miss.

How do I get Free Spins on Finn and the Swirly Spin?

You’ll always start with a Free Spins Key symbol on the bottom left of the reels, and it’ll gradually make it to the centre of the spiral if you keep playing for long enough - when this happens, and there are no more winning combinations or avalanches, you’ll activate Free Spins. There are four different Free Spins games to choose from - depending on how many keys you’ve collected in the key meter - all corresponding to one of the game’s random features.

What are the four random features?

The first is Starfall Wilds. This randomly places 2 or more Wild symbols on the reels - if they don’t contribute to a win, more will be placed at random until you win. Next is the Dragon Destroy feature, which triggers the destruction of a random number of symbols, consequently causing an avalanche and guaranteeing a win. The third is the Irish Luck feature, in which a line of the same symbol is added to the reels, again causing a guaranteed win. The last feature is Magic Transform. This transforms all Spade and Heart symbols into a higher paying symbol.

What’s the RTP and volatility of Finn and the Swirly Spin?

The RTP, or return-to-player, of Finn and the Swirly Spin is 96.62%, which is a little above average for online slot games. The volatility is medium-high, however, so there’s an aspect of tactical thinking and risk-taking needed when playing - particularly if activating the bonus features. 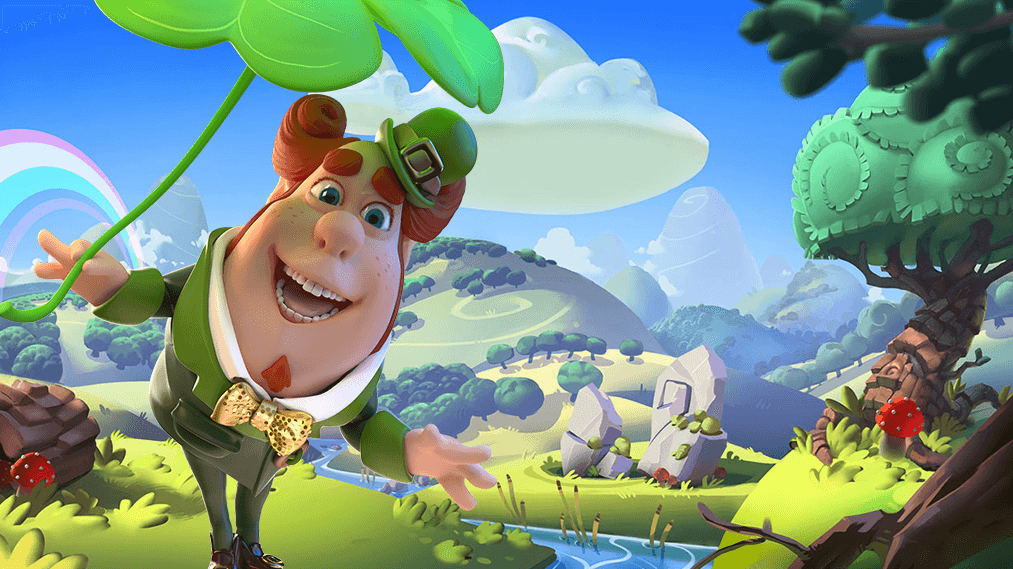 It’s a slot, but not as you know it. In the Irish countryside, Finn will serenade you with his musical prowess as you go dizzy looking at the spiral pay board. The leprechaun might not guide you to the pot of gold, but he’ll definitely give you a chance to win big on this NetEnt game. The graphics almost have a CGI-like quality, showing off a vibrant, colourful Ireland where clovers, acorns and horseshoes are commonplace. With four random features on top of Free Spins and the curious spiral layout of this slot, you won’t be rushing back over the Irish sea in a hurry!

Finn and the swirly sounds

The graphics here are bright, displaying an Ireland that’s full of life - in the bottom left, Finn himself is providing the music, and there’s the obligatory rainbow. Will you find the pot of gold? The setting is 3D in appearance, with hills in the distance partly covered with fog, and more trees than you could ever imagine, making it look like Finn’s living in his very own Irish paradise.

With so much emphasis on the impressive graphics, it’s easy to look past the music. However, Finn proves himself to be more than capable at entertaining us with a Celtic folk melody, and you can hear the whirring of the spiral when you give the play board a spin too, making it feel as though Finn’s powering it as you play.

Although the play board might look a little confusing if you’ve not played FInn and the Swirly Spin previously, it’s simple. Just find a horizontal or vertical line of 3 or more matching symbols, and you’re good to go. Just think of it as being a regular slot with 5 reels and a whole load of paylines - it’s only the way the symbols travel that might seem odd.

The Diamond is the most valuable symbol to find, but there are various Irish-themed symbols to catch too, like the precious four-leaved clover. Finn also gifts us avalanches too, as winning combinations of symbols disappear, to be replaced by brand new symbols - you can win multiple times on the same spin!

Look out for the Free Spins Key symbol. It’ll start off right at the bottom-left of the play board, where the spiral starts, but it won’t end there. As you play, it’ll gradually make its way to the centre due to symbols ahead of it being removed. Once it finally gets slap bang into the centre, with no more avalanches or winning combos to be dealt with, you’ll activate Free Spins.

There are four different types of Free Spins, and as you increase your key meter, you’ll unlock them all! Each Free Spin type corresponds to one of the Random Features, which are Starfall Wilds, Dragon Destroy, Irish Luck and Magic Transform. For example, if Star Bar Free Spins are activated, you’ll get seven Free Spins alongside the Starwall Wilds Random Feature - as the name suggests, Wild symbols will appear on the board to get you a win. The other features trigger avalanches, symbol transformations and other ways to get guaranteed wins, so get started unlocking them!

There might be a lot going on in this NetEnt slot, but you shouldn’t be deterred from trying out Finn and the Swirly Spin if you’re less experienced or prefer simpler games. The bonus features are fun, and you might enjoy trying to fill your key meter and unlocking the different Free Spins, and the graphics are great. Yes, the theme isn’t the most inventive, but NetEnt manage to do it well, giving Finn some real character.

With an RTP of 96.62%, it’s worth giving this slot a go - even if you don’t usually play slots with higher volatility. The spiral play board is a novelty, so try it out!

NetEnt’s origins lie in Sweden, where they were formed in 1996 though their origins lie in the ‘70s. They’re at the forefront of online slot gaming, offering the mega-famous Starburst amongst myriad other games - over 200 in total. Finn and the Swirly Spin is one of their most popular slots, while others include Gonzo’s Quest, Mega Fortune, and more.