Hunt out a big win in this NetEnt slot

If you’re hunting for a game with a steampunk theme, NetEnt’s Steam Tower slot certainly fits the bill! Across 15 paylines and five reels, you’ll be helping our hero climb this Victorian steam tower so he can rescue the princess - will he make it?

A less conventional theme, the Victorian steampunk feel works well and there are some great features too. With so many characters, you won’t be short of company, and you’ll definitely be kept busy. To find out more, have a look at our review further down the page.

Join BetVictor today and wager just £10 to claim £90 in casino bonuses to be used on a range of games. BetVictor have over 700 games on offer including slots, table games and progressive jackpots. Play Steam Tower and see whether you'll bag yourself a big win!

NetEnt casinos are one of the top providers and for good reason. Featured games include the hit slot game, Steam Tower, the steampunk adventure slot. New players to Touch Mobile Casino can sign up and claim up to £200 cashback, from their desktop or on the go on mobile.

PlayOJO is a top online casino and for good reason. From online slots and now bingo, it's got everything you could want from an online casino all in one place. Try your hand at the steampunk slot game, Steam Tower, and see whether you can search out a big win! Up to 50 wager spins at PlayOJO make this offer even more enticing.

Find hundreds of the best slot games, including Steam Tower at 21Casino, a top choice for slot game and casino game enthusiasts. With a terrific welcome offer, claim a 121% bonus up to £300 when you sign up. You'd be crazy to miss it.

Over 18s and new players only.
playDream Vegas REVIEW

Take a trip to Vegas from the comfort of your sofa. Dream Vegas is offering new players up to £400 bonus cash and 50 free spins on any of your favourite NetEnt slot games. You can play hundreds of casino titles including popular video slots, table games and live casino variations. Why not start your adventure with the Victorian, steampunk slot Steam Tower?

The dragon eye symbol is most valuable, and when you get a combination of five it’ll pay out 2000x your bet. For the same size combination, the lowest-value symbols pay out 150x your bet. The top jackpot available is 300,000 coins, and you can win this by rescuing the princess while playing with the maximum bet.

What's the RTP of Steam Tower?

The return-to-player, or RTP, of Steam Tower is 97.04%. This is over average, meaning that players can expect a decent return - the RTP of most slots is around 96-96.5%. This NetEnt slot also has medium volatility, meaning that there is a good balance between the frequency and size of wins.

Can you win free spins in Steam Tower?

Yes. You win free spins by getting one or more stacked wilds, which cover the entire reel. This will activate ten free spins, and the game will move up to the first floor of the tower. All wins during free spins are multiplied by the multiplier, which is updated before each free spin and is dependent on the floor level. 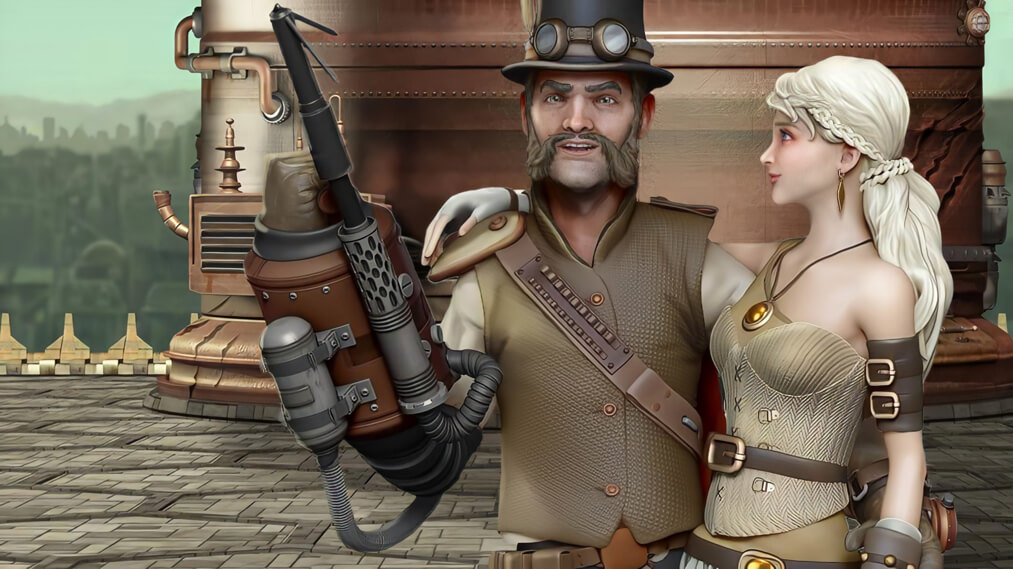 There’s a lot to capture your imagination in Steam Tower, from the industrial Victorian theme to the goal of rescuing the princess. Multipliers, free spins and stacked wilds all combine to add a touch of drama too, making this a game you might win big on. To discover more about this steampunk-themed NetEnt slot, keep reading...

Looking up at the tower

Taking influence from steampunk, this is a slot that looks great - it’s unlike other Victorian-themed games you may have played before, with its focus on the industry of the era. It’s not the brightest slot out there, with a lot of browns and greys, but that’s to be expected given the theme - it works well and looks good.

A tune full of brass sounds plays in the background, and as you spin you can hear the play board whirring, as everything turns to make it work. Meanwhile, there are a few different characters to meet, and they’re all very realistic-looking. Our protagonist looks convincing as he’s kitted out head-to-toe in steampunk garb, and the princess could be out of a Disney movie with her fair skin and golden locks.

There are just 15 paylines in Steam Tower, and as normal they all start from the leftmost reel, moving rightwards. The play board has five reels altogether, all on the ground, but if you get into the bonus game you get to climb up - potentially, to the top of the tower. You’ll come across a range of symbols as you play the game. The most valuable symbol, the dragon eye symbol, can pay out up to 2000x your bet, while the hero and princess symbols pay out 1000x and 500x respectively.

The least valuable symbol is the J symbol, and this will at most pay 50x your bet. In between are four more symbols, and these all pay out at differing rates. The wild symbol substitutes for all other symbols, and so might help you get those big wins too! The RTP, or return-to-player of this slot is 97.04%, which is higher than average, so players can expect to see a higher return than they might on slots with lower RTPs.

Climbing in the wild

During free spins, all wins are multiplied by the multiplier, which is updated before each free spin and will depend on the floor you’re on. The first three floors will give you a multiplier of x2, and this will gradually increase until floor 16, which has a multiplier of x7. As floor 16 is the top floor, you’ll also receive a bonus win of 1000 coins multiplied by the bet level! To keep an eye on your progress, there are three meters to keep an eye on. The Floor Meter tells you the floor you’re on, while the Multiplier Meter tells you your current multiplier. The Tower Meter shows you both your current multiplier, and where you are in the tower, for ease of use.

Steam Tower is a fascinating slot with an impressive story, and a solid RTP too. Some players might find the base game lacking slightly, as the focus seems to be on the bonus rounds, but it’s probably still worth trying out for the theme alone. You’ll just be hoping that you make it to the bonus round for extra excitement.

Founded in 1996, Swedish company NetEnt is one of the most well-known and highly-regarded out there! Though their most-popular slots include Starburst, Reel Rush and Gonzo’s Quest, they’ve got plenty more in their locker. As Steam Tower shows, their games have plenty of variety and numerous themes. It’s no surprise, considering there’s around 200 of them.