Will this slot jangle your bones as you spin the reels?

Observe the Day of the Dead in Thunderkick’s Esqueleto Explosivo. Spanish for ‘exploding skeleton’, this slot has a spooky theme across five reels and 17 paylines, while symbols drop down if you win!

This slot has a great theme and there are cartoon skulls everywhere - watch out for the yellow skull for best results, but don’t forget the multiplier either! Check out our review down below for all you need to know about this fun Thunderkick slot.

This Thunderkick slot has you celebrating the festival of the Day of the Dead. See if this slot rattles your bones! Try out Esqueleto Explosivo at Videoslots and claim a £200 bonus when you sign up.

Join BetVictor today and wager just £10 to claim £90 in casino bonuses to be used on a range of games. BetVictor have over 700 games on offer including slots, table games and progressive jackpots. Try out Esqueleto Explosivo and see if you'll be celebrating the Day of the Dead in style.

By signing up to 888 Casino, new players are given £88 to play with - with no deposit required! Play Esqueleto Explosivo without spending a single penny, or check out 888 Casino's huge range of slot and table games. Ready to play some more? Your first deposit is matched 100% too, giving you double the money to enjoy!

Find hundreds of the best slot games, including Esqueleto Explosivo at 21Casino, a top choice for slot game and casino game enthusiasts. With its bone jangling designs and festivities, you'll be dying to play this Day of the Dead slot! With a terrific welcome offer, claim a 121% bonus up to £300 when you sign up. You'd be bananas to miss out.

Esqueleto Explosivo celebrates all things carnival and party with this Day of the Dead slot! Will you have a celebration when you play this Thunderkick slot? Join slotsmagic and claim 75 free spins when you sign up and deposit £10. Who could resist a deal as good as that?

What does the wild symbol do in Esqueleto Explosivo?

The Explosivo wild symbol acts as a substitute for all other symbols. It will also blow up the eight closest surrounding symbols, giving you a new chance to win, and increasing the multiplier by one level too.

What’s the RTP of Esqueleto Explosivo?

What is the dropping symbols feature in Esqueleto Explosivo? 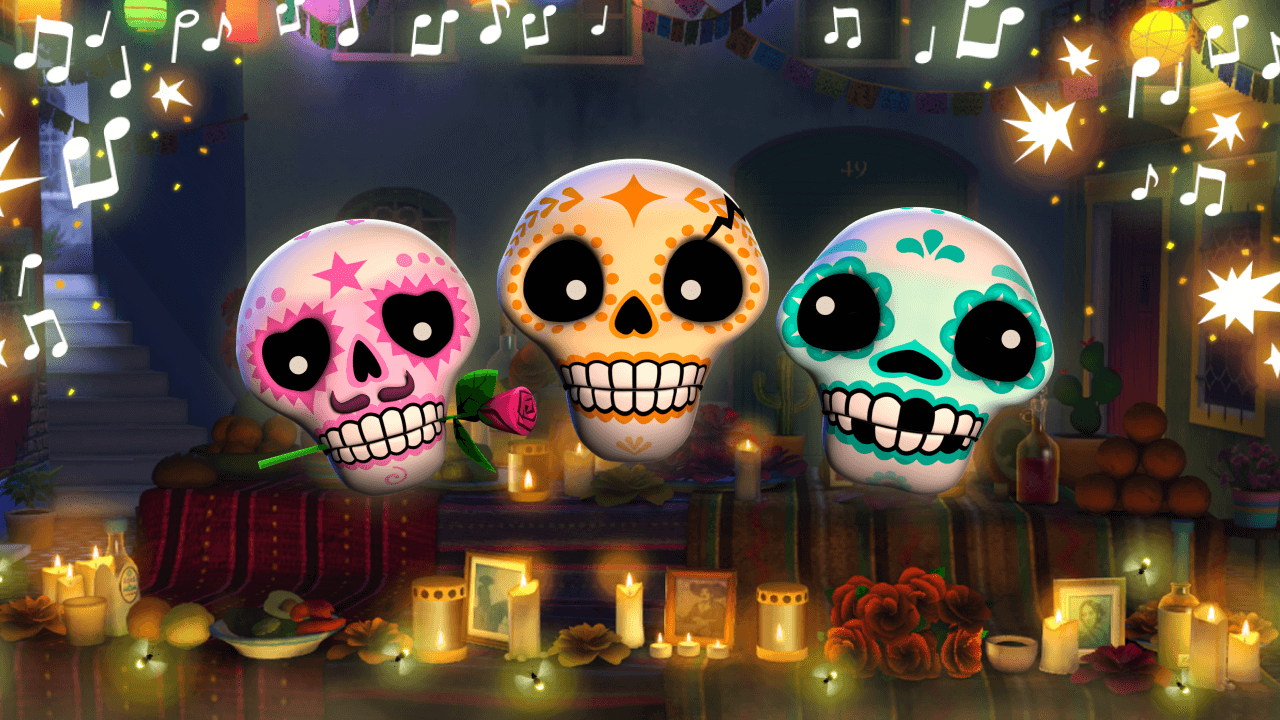 Esqueleto Explosivo sees Thunderkick put their own spin on the Mexican Day of the Dead, and there’s a lot of fun to be had in this slot! Along 17 payline and five reels are a handful of exciting features that will leave you feeling more alive than before, so should you give this slot a go? Keep reading to find out.

Din of the dead

Like in most Thunderkick games, the graphics here certainly impress. Despite the macabre theme of Esqueleto Explosivo, it still feels fun and light-hearted thanks to the cartoon visuals - there are a lot of skulls, all in different colours, and below the bottom reel is the rest of the skeleton. They’re holding different musical instruments, and there are candles beside them. It’s a bit of an unconventional mariachi band, but we’re not complaining…

The slot is quite dimly lit, but you can see various buildings in the background, depicting a Mexican pueblo in the evening, as people come to take part in the Day of the Dead festivities. A fast-paced song plays but it’s overshadowed by the sound effects - from fireworks to dogs barking, there’s a lot going on here. Esqueleto Explosivo is not the sort of game that hovers in the background quietly - you’ll find that there’s a lot take in, but it’s all part of the experience!

The basic gameplay here isn’t too different to what you’ll find in other Thunderkick slots. There are five reels and 17 paylines - an unconventional number, perhaps, but they’re all typical paylines. As usual, just match symbols beginning with the leftmost reel rightwards, and you’ll have a chance of winning.

There are five regular symbols to look out for, and they’re all skulls! The turquoise skull is the least-valuable, and from a £1 bet will get you a maximum of 70p. In increasing value, you’ve then got the orange skull, the blue skull and the green skull, which is the second most valuable. However, the pink skull is the most valuable symbol of all, winning you a maximum of £2.50 from a £1 spin. The RTP, or return-to-player, of this slot is 96% - most slots are in the range of around 95-97%, so this is pretty average - and there’s low volatility in Esqueleto Explosivo, which means you can expect fairly frequent small-to-medium wins.

Going out with a bang

Unlike many other popular slots, there’s no ‘proper’ bonus game here - if you’re after free spins, you’ll likely be disappointed. However, there are still some fun features to enjoy while you celebrate the Day of the Dead. First up is the dropping symbols feature - when symbols form part of a winning combination, they disappear from the board and get replaced by new or existing symbols, as symbols drop down from the top to ensure that the play board is filled. This will continue for as long as you keep getting new wins.

Esqueleto Explosivo also features the Explosivo wild symbol, which is unlike any wild you’ll have seen before! Yes, it substitutes for all other symbols, but it’s got plenty more in its locker. It will always blow up all eight surrounding symbols giving you a brand new chance to win on the same spin! Both the dropping symbols and the Explosivo wild symbols trigger an increase of the Mucho multiplier - it’ll increase by one level each time. As you can see at the bottom of the play board as the skeletons play their instruments, the multiplier starts at x1 and doubles each time up to x32, so you could get some pretty big wins!

Whether or not you enjoy Esqueleto Explosivo is likely to depend on how important you consider a good bonus game to be. We enjoy a lot in this Thunderkick slot, as the theme and graphics definitely succeed in holding your attention, and the Explosivo wild symbol adds a little more excitement than the typical wild symbol. There’s a good multiplier too, and the RTP is definitely palatable. The only potential issue is the lack of free spins or a similar bonus game - the base game is great, but it’s something that players might miss. That said, it’s worth trying out!

Founded in 2012, Thunderkick are newer than many of their rival providers, but are already well-regarded, making a name for themselves quickly. From Sweden, they boast a number of impressive slots with well thought-out themes and graphics, and they include Pink Elephants 2, Jaguar Temple, Midas Golden Touch and many more - Thunderkick offer plenty of variety in their games.