Will you pop out a big win with this original Microgaming slot?

From Microgaming, The Incredible Balloon Machine is unlike anything else you’ve played before - we guarantee it! Instead of spinning the reels and matching symbols along paylines, the aim of the game is to win money by blowing up your balloon.

Feel free to take a risk, but your balloon could pop - this slot is a delicate balancing act. Not too difficult to figure out, but an exciting departure from the games you’re familiar with, this is a fun slot to try. Check out our review at the bottom of the page to find out more.

Fly high in the sky as you try your hand at this Microgaming slot The Incredible Balloon Machine. Playzee brings you the best of casinos and slots, all in one place, all online. Claim 100 free spins and a 100% bonus when you sign up.

Over 18s and new players only.
playLottomart Review

Lottomart's mobile app is a fresh and unique way to enjoy slot games on the go. Why not try an equally unique 'slot' in The Incredible Balloon Machine from Microgaming? New users can take advantage of Lottomarts welcome pack, where a £10 deposit will get you 100 free spins worth £20.

Mecca Bingo is one of the biggest names in the online casino market and for good reason! Find all the best slot games from the usual you expect to unique games like The Incredible Balloon Machine! Sign up and deposit £10 to claim 25 free spins. Try your hand at Bingo, slots, and casino games with one of the country's top trusted sites.

MrQ was the first online bingo site to offer absolutely no wagering across all of its promotions. New players can deposit and spend £10 with the code STAR30 to claim 30 free spins on Starburst, with all winnings paid in cash! Once you've had your Starburst fill why not fill up balloons as you 'blow' these reels?

NetEnt casinos are one of the top providers and for good reason. Try your hand at this unique slot, The Incredible Balloon Machine. Fill the balloon up but don't let it pop! New players to Touch Mobile Casino can sign up and claim up to £200 cashback, from their desktop or on the go on mobile.

How does The Incredible Balloon Machine work?

What’s the Pick Bonus in The Incredible Balloon Machine?

The Pick Bonus can be awarded when a bonus balloon appears. It comprises up to eight different rounds of balloons for selection, with each round containing five balloons, which all have either credit awards or 2x multipliers. Just select a balloon to award the prize. However, balloons can also contain ‘Advance’ or ‘Complete’ icons. ‘Advance’ means that you proceed to the next round, while ‘Complete’ will put an end to the bonus.

What’s the RTP of The Incredible Balloon Machine?

The RTP, or return-to-player, of The Incredible Balloon Machine is 96.75% - this is at the higher end of average. Moreover, this slot has medium volatility, meaning that there’s a balance between size of wins and frequency of wins. 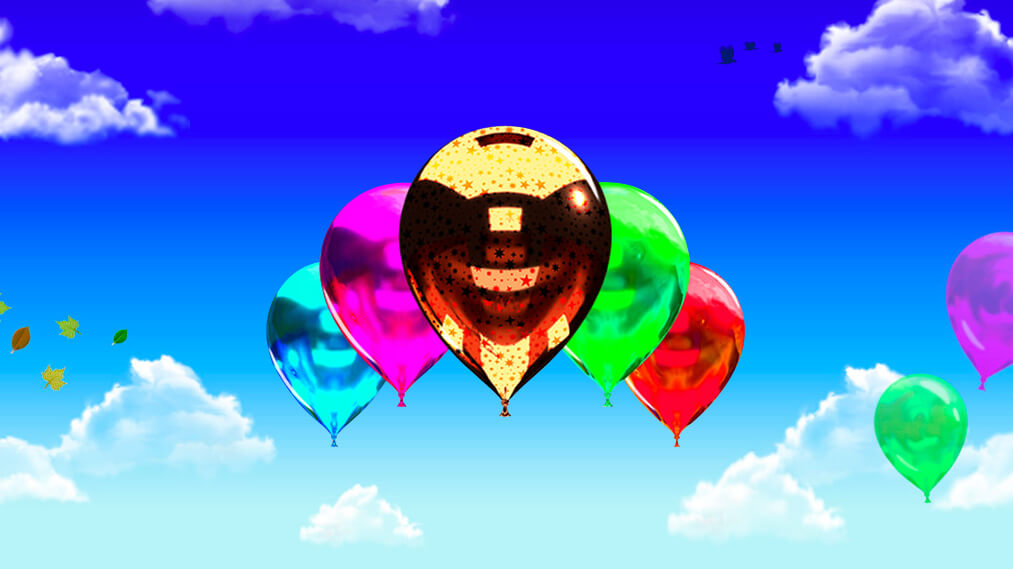 Where can we start when describing The Incredible Balloon Machine? It’s one of Microgaming’s more creative offerings, though the premise is far more simple than it looks. You’ll be transported back to childhood parties, blowing up balloons and hoping you won’t pop them, but with the added incentive of winning money too! Should you decide to try out The Incredible Balloon Machine for yourself? Keep reading to find out...

Listen for the pop

This slot is very bright and vibrant - it’s definitely visually appealing and is a little reminiscent of the Disney Pixar movie ‘Up’. The background is that of a deep blue sky decorated with white, fluffy clouds floating past, while there’s a lot of what looks like bronze ribbon. It might form part of the mechanics of the machine, which has pride of place at the bottom of the screen. Its meter is quite colourful with red, yellow and green, and there’s plenty going on.

You can hear the sounds of nature as you play, from the wind to birds tweeting in the sky - and of course the balloon machine itself! There’s also some rhythmic music playing, which adds a touch of fun to the game. As a slot, The Incredible Balloon Machine has quite a cohesive theme, as both the sounds and graphics work together to give you an immersive experience.

If you’re expecting reels, paylines and symbols, you’re set for a surprise! The Incredible Balloon Machine is completely different to typical slot games, but it’s not too difficult to figure out. Microgaming utilises the Wincrease feature, giving you the opportunity to ‘inflate’ your win. To begin, you simply hold down the ‘Spin’ button, inflating the balloon. The balloon will either pop, present you with a credit amount, or produce a bonus balloon. If you get a credit amount on your balloon, you can either take the win as it is, or hold down the ‘Spin’ button again. This might inflate the balloon further, increasing your potential win, or pop, which will take you right back to square one. Alternatively, it can instead detach the balloon, giving you the original credit amount win. Just press collect before the balloon pops to win!

The main bonus feature here is the Pick Bonus, which can be triggered when you get a bonus balloon. When a bonus balloon appears, it’ll either pop, leaving you with nothing, or begin the Pick Bonus. It consists of a maximum of eight rounds altogether, and each round presents you with five balloons - they all contain either credit awards or 2x multipliers. You just need to select a balloon to win the prize it presents you with - a 2x multiplier will double your cumulative total from the entire Pick Bonus, so some tasty wins are up for grabs!

However, balloons can also contain ‘Advance’ and ‘Complete’ icons. The former will take you to the next round, where you get to choose a balloon again, while the latter will end the bonus round, and you’ll be back to the base game again. Aside from the Pick Bonus, there’s also a multiplier feature which can trigger randomly - in this instance, any awarded or collected credit amount will be multiplied up to 10 times, before the game will then conclude.

If you want something a little different, but still as fun as you expect, The Incredible Balloon Machine is a great option. The RTP is reasonable and it doesn’t take you long to get used to how this game works. There aren’t a load of bonus features, but when the premise of the base game is so unusual, that doesn’t matter too much - you’re sure to be kept entertained by this unique Microgaming slot.

Microgaming are one of the biggest players in the industry, with hundreds of games on offer - since being founded back in 1994, they’ve become one of the leading providers. They boast a number of branded slots like Game Of Thrones and Jurassic Park, as well as the likes of Book Of Oz, Break da Bank Again and Mega Moolah. With Microgaming, there’s something for everyone.