By signing up to MrQ and verifying your mobile number you can claim 10 wagering free spins on Thunderkick's excellent Midas Golden Touch! Plus, deposit £10 to received another 10 free spins on Stampede. Play all the best Thunderkick slots and enjoy all day bingo at MrQ.

Terms & Conditions: 10 Free Spins credited upon your first £10 deposit on Stampede slot only, valued at 25p per spin. Free spins must be used within 48 hours of qualifying. All winnings are uncapped and credited to your real money balance. To qualify customers must successfully verify their mobile number. Qualifying customers will receive 10 free spins on Midas Golden Touch slot game. Max stake per free spin bet is 25p. Full T&Cs apply.y.

Karamba casino is home to over 300 games including popular Thunderkick slots like the hit slot Midas Golden Touch. Sign up and deposit to get a 100% match bonus up to £50 plus 20 free spins. Deposit another £10 the following two days and you can claim 80 more free spins!

Start spinning to get winning at Bet365 Casino, one of the top online casino sites around. Come and see why it's a favourite, with hundreds of slot games to choose from, such as Jaguar Temple and Esqueleto Explosivo. Claim a 100% bonus up to £100 when you sign up.

Play Thunderkick's top games including Midas Golden Touch and Carnival Queen at 888Casino. You'll enjoy a healthy 100% match welcome bonus, up to £100, and £30 extra when you sign up and start spinning.

Join BetVictor today and wager just £10 to claim £90 in casino bonuses to be used on a range of games. BetVictor have over 700 games on offer including slots, table games and progressive jackpots. Play over 30 Thunderkick games including the latest releases like Midas Golden Touch and Carnival Queen.

Sign up to SlotsMagic using bonus code BOOK75 to claim 75 free spins and up to £100 bonus cash. Enjoy a great range of Thunderkick games at SlotsMagic including Wild Heist at Peacock Manor, The Rift, Jaguar Temple and the brand new game – Midas Golden Touch.

Join 21 Casino to claim up to £300 bonus cash to use across hundreds of popular casino games from top providers like Thunderkick. VIPs are treated to up to £50 bonus cash every day which you can spend on your favourite slot games like Birds on a Wire and Flux.

Over 18s and new players only.
playGood Day Review

Good Day is the latest slot site from Jumpman slots. Like other Jumpman sites, users can win a variety of prizes by spinning the Mega Reel. Play a wide selection of games on a user friendly site.

Videoslots is home to over 3,500 slot games including Pink Elephants, Babushkas and The Falcon Huntress. Sign up and deposit today to receive a 11 free spins and a 100% casino bonus up to £200, which you can use to play any of Thunderkick’s awesome slot games.

Join Yako Casino and deposit to claim your 50% match deposit up to £222. Use your casino bonus to try out Thunderkick’s full portfolio of games including the 8-bit themed slot Flame Busters with exclusive fire drill bonus or get ready to rumble with a Mexican showdown in Luchadora.

Terms & Conditions: Min. deposit £10. Wager requirements are 40x bonus. Max. £100 withdrawal for registered players who have not yet made a deposit. Bonus funds max. bet is £5. Bonus is excluded for payments made with Skrill/Neteller. Further T&Cs apply.

Which casino has the most Thunderkick slot games?

Casino operators are not obligated to release the entire game portfolio of every content provider they partner with. Although it's unlikely you’ll find a site with a limited range of Thunderkick games due to the already small size of the company’s portfolio.

MrQ, Cashmio and BetVictor all have the full range of 31 games. You can also search or filter the slot selection at most UK online casinos before you sign up or deposit.

When is the next Thunderkick slot being released?

Thunderkick releases around seven slot games per year, averaging one every two months.  The next game due for release is Raven's Eye on June 19th.

This is significantly less than other slot providers, however, Thunderkick has fewer resources than powerhouses like NetEnt and Microgaming.

Although you have to wait a little longer for new games, they're certainly worth it when they finally arrive. It's clear that Thunderkick prioritises quality over quantity and doesn't launch any products that fall below its high-standards.

Why is there no bonus game in Toki Time?

Most Thunderkick slot games feature a bonus round which is usually triggered by landing three or more bonus symbols.

However, there are a handful of games that don’t include a dedicated bonus game including Babushkas, Well of Wonders and Toki Time.

Where are the Thunderkick progressive jackpots?

Thunderkick doesn't currently offer progressive jackpot options on its slot games. We’re unsure whether it will in the future, but we doubt it’s a priority right now as the team appear to be focusing on growing its portfolio before introducing additional products like progressive jackpots.

If you want to play a progressive jackpot, we recommend trying NetEnt’s Hall of Gods or Microgaming’s Mega Moolah series, both of which have paid out over millions of pounds to lucky winners. 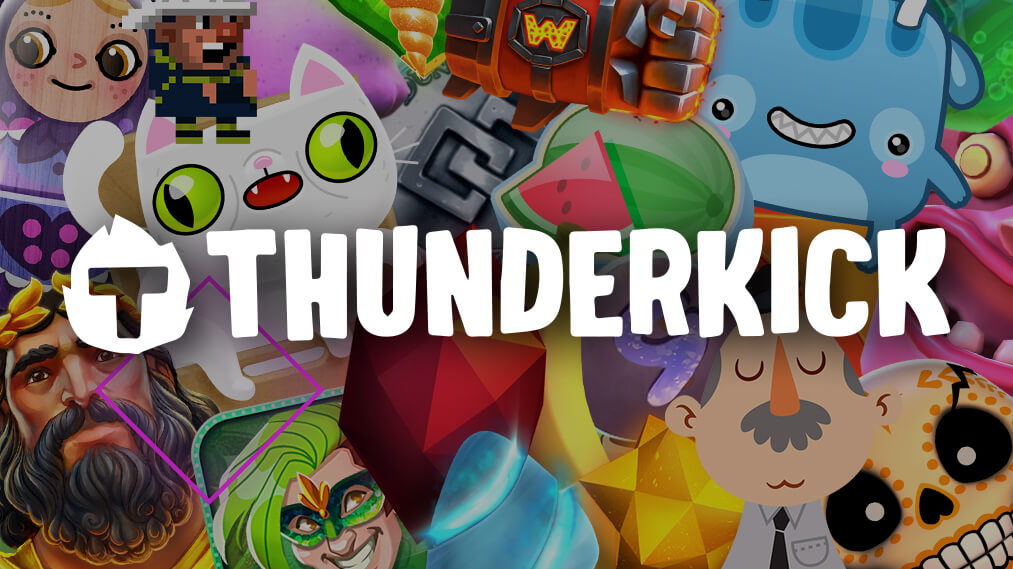 Thunderkick is an independent online casino game supplier and remote gaming server based in Stockholm and Malta. The company is made up of a small, enthusiastic team of around 40 employees, some of whom previously worked for rival, NetEnt.

Thunderkick was founded in 2012 but didn’t release its first set of games until the end of 2015. These included Magicious, Flux and Arcarder.

The studio has since launched over 30 slot titles with themes including Russian dolls, magical wells, mythical gods and ice cream cones.

Thunderkick slots were first launched on Casumo, closely followed by Vera & John Casino, and are now available at hundreds of other slot sites of all sizes.

Thunderkick excels at creating original slot games with high-quality graphics and innovative gameplay features. It’s refreshing to see an independent company push boundaries and stand out in a highly saturated market consisting of over 3,500 other titles.

Thunderkick’s most inventive game feature is the trademarked Inwinity Spin® – found in Birds on a Wire and Barbershop. The feature is triggered after you’ve used all free spins in a bonus round and grants you an unlimited amount of spins until you land a winning payline.

All Thunderkick slot games are built using HTML5 software and feature real-time 3D graphics, meaning they can be played across all devices and load quickly.

The mobile version is similar to its desktop counterpart when on a horizontal screen, except for the controls, which move to the right-hand side instead of the bottom.

If you flip your screen to portrait view, the playboard is pushed to the top of the screen and the spin button is enlarged and place in the centre of your screen, making gameplay easy.

Set in the heart of Africa, Pink Elephants is Thunderkick’s most successful slot game and we’re not surprised. With an extraordinary 4,096 ways to win and three bonus symbols, Pink Elephants has incredible graphics and a generous 96.1% RTP.

Trigger the bonus game to claim up to 19 free spins, then collect elephant orbs and magical peanut symbols to unlock even more.

Carnival Queen was released in March 2019 and is based on the famous Mardi Gras festival. Every winning combination triggers the dropping symbol multiplier that gives you another chance to win per spin.

There are also two bonus symbols and an increasing multiplier meaning you could win up to 22,700 times your bet.

Based on the Mexican holiday, Day of the Dead, Esqueleto Explosivo was one of Thunderkick’s first slot games launched in 2015.

There are no bonus features, but you’ll find dropping symbols, multipliers and an exclusive explosive wild symbol. Land the golden wild skull and it’ll blow eight of the closest symbols away and replace them with a new, potentially, winning combination.

Grab your crowbar and lantern, because Wild Heist at Peacock Manor joins four masterminds on their quest to steal the golden peacock.

The slot plays on a standard 3x5 board, with 17 winning paylines and nine bonus symbols. With a bonus game and plenty of mystery features, Wild Heist is one of Thunderkick’s most ambitious slots, but also one of its best.

Flux is a simple game with a 3x5 playboard, glistening paytable symbols floating in the abyss and 15 winning paylines.

Match three bonus symbols to trigger the bonus round where you can choose from three reward options, all with different features, including up to 48 free spins, two-way wins and extra rows.

Thunderkick has created a solid range of games that are both entertaining and high quality. We admire how the team understands its limitations and focuses on creating exceptional games, rather than trying to keep up with its competitors by launching sub-par products multiple times a month.

We 100% recommend the full suite of Thunderkick slot games – especially if you’re looking for something new and fun that doesn’t take itself too seriously.

What Slots Can You Play At A Casino?

Slot games have come a long way since the first fruit machine was invented in 1891.

Thunderkick is back with a bang.

Thunderkick has just launched the latest addition to its growing portfolio of creative slot games.