With a mega load of ways to win this slot is elephant-astic!

Thunderkick’s popular Pink Elephants 2 slot is full of animals enjoying life on the rolling hills and mountains of psychedelia, including the eponymous pink elephants themselves.

Sequel to the original Pink Elephants, this slot has a mega 4096 ways to win, a whole load of free spins, and the fascinating Elephant Orbs too! Check out our review at the bottom of the page to get the lowdown on this Thunderkick slot.

Join Novibet today and deposit to double your cash with a 100% welcome bonus to play your favourite casino games. Choose from popular slots like Pink Elephants 2 by Thunderkick Gaming as well as live dealer table games. Will you grab yourself a big win with these colourful creatures?

MrQ was the first online bingo site to offer absolutely no wagering across all of its promotions. New players can deposit and spend £10 with the code STAR30 to claim 30 free spins on Starburst, with all winnings paid in cash! Or why not try out Pink Elephants 2, the elephant-astic slot game from Thunderkick.

Join BetVictor and wager just £10 to claim £90 in casino bonuses to be used on a range of games. BetVictor have over 700 games on offer including slots, table games and progressive jackpots. And with Pink Elephants 2 on offer, what more could you want?

Join Videoslots casino today to play over 3,000 slot games and you’ll be treated to 11 wager-free spins. Deposit £10 and you’ll get a 100% match bonus, plus £10 extra cash. That gives you more chance to spin the reels and hopefully grab a win! Why not give Thunderkick's Pink Elephants 2 and see if this slot tickles you pink?

The bonus game consists of free spins, starting from between seven and 19 depending on the amount of scatter symbols on the board. During the bous game, you’ll collect Elephant Orbs, filling four symbol meters. Whenever a meter gets filled, the corresponding symbol will be replaced by the next mid-win symbol, as per the paytable. If you fill the last meter, all mid-win symbols will transform into Pink Elephant symbols for the rest of the bonus.

How do you win in Pink Elephants 2?

In Pink Elephants 2, there are 4096 different ways to win. To form a winning combination, you simply need to match symbols from left to right, starting from the leftmost reel - all unique combinations pay out.

What’s the RTP of Pink Elephants 2?

The RTP, or return-to-player, of Pink Elephants 2 is 96.13%. With the typical RTP being around 95-97%, this is on the higher side of average so you can expect a decent return. Meanwhile, the volatility of Pink Elephants 2 is medium-high - slightly lower than in the original - so big wins are up for grabs, though they might be a little less frequent than in some other slots. 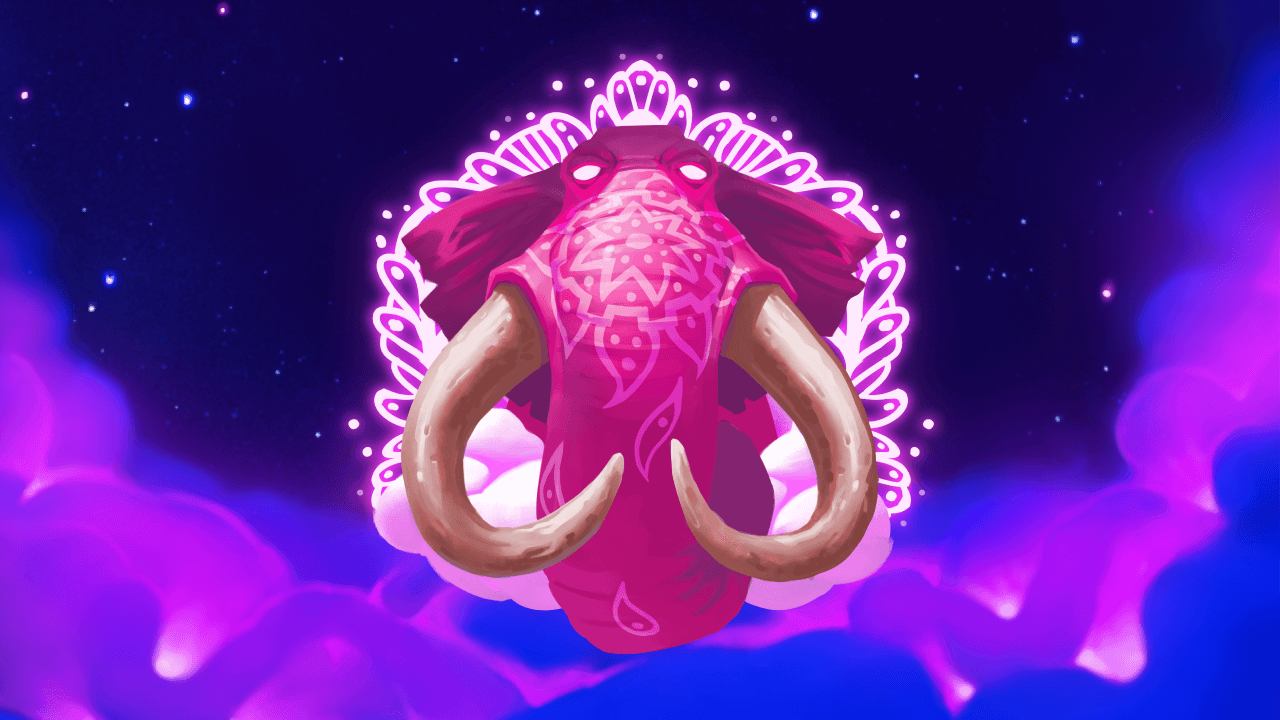 Following on from the original Pink Elephants, Thunderkick’s sequel proves to be a worthy successor. The elephants are back, and this time they’re in the mountains. This is a simple game to get your head around, but there’s an exciting bonus game and of course some great ways to win too - should you give this slot a try? Keep reading to find out.

There’s a very psychedelic, enchanting vibe to the graphics in Pink Elephants 2. The setting feels very peaceful and tranquil, as there’s nobody around - just grass with rocks scattered around, what look like horseshoes made from stone , and picturesque mountains in the background. Though the graphics are cartoon-like, there’s a fairly realistic CGI feel to them - as you see the wind blowing gently, and the glowing pink orbs, you’ll feel as if you’re up in the mountains, and in a bit of a trance.

The music definitely fits in too. It has a very serene, mesmerising quality that makes you feel as if you should be meditating between spinning the reels! There’s a drone-like sound and what sounds like a pan flute in there too - it’s ideal if you want to sit back and enjoy some time to yourself! Together, the music and visuals combine to create this dreamy, hallucinatory adventure.

Pink Elephants 2 doesn’t offer the usual number of paylines. Instead, there are a huge 4096 ways to win! To win, you just need to find consecutive symbols from left to right, beginning on the leftmost reel. All unique combinations pay, and there are definitely plenty to find! Watch out for the wild symbol too - it substitutes for all symbols apart from the scatter and mystery scatter symbols.

When you’re looking to make winning combinations, there are eleven different symbols to be aware of. There are six low-value symbols, all letters and numbers, and from a £1 spin the most you can earn from a winning combination is £4 - that’s by getting six A symbols. Next up are four mountain goats, and they’re all a little more valuable, so they can get you some more money under your belt - particularly seeing as there are so many ways to win! The last symbol, however, is the Pink Elephant itself. It’s the most valuable symbol of all, winning you a maximum of £10 from a £1 spin, while even just getting two in a combination will win you your £1 back.

If you want to win free spins, you’ll have to get some scatter symbols on the board. Three or more will trigger free spins, while once you’re in the bonus game, another two or more will earn you some extra spins on top of the original lot! Three scatters will win you seven spins to begin with, while each additional scatter will get you another four, up to a total of 19. Two scatter symbols in the bonus game will get you an extra three spins, and each additional scatter will add another two onto that, up to a total of eleven. Meanwhile, in the base game, you could see between one and five mystery symbols get randomly triggered, which will of course increase your chances of winning the bonus game too.

In the bonus game, there are four symbol meters, which you’ll be aiming to fill with Elephant Orbs. Whenever a meter gets filled, the corresponding symbol will be replaced with the following mid-win symbol as per the paytable. Should you fill the final symbol meter, every mid-win symbol on the play board will be transformed into a pink elephant symbol for the rest of the bonus game. Each filled meter will win you an extra free spin too!

If you enjoyed the first Pink Elephants, you’ll like this one too! However, even if you didn’t play the original there’s still plenty to enjoy in Pink Elephants 2! It has a really interesting theme that sets it apart from the usual slots, and with a fun bonus game and 4096 ways to win too, there isn’t much that this game can do wrong. Plus, its gameplay is perfect even as a mobile slot or on tablet, so you can play on the go! It’s definitely worth trying out!

Thunderkick was founded relatively recently - in 2012 - but the Swedish company are quickly becoming one of the best-regarded providers out there. Their slots have a wide range of themes, from the psychedelic Pink Elephants and Pink Elephants 2 to historical/mythical games like Midas Golden Touch, Jaguar Temple and Bork the Berzerker, so there’s something for everyone. However, the Pink Elephants series remain amongst their most popular slots.