Travel through space as you try out this reactor slot!

Play’n Go’s Reactoonz is a slot unlike no other, with hordes of otherworldly characters across seven reels and the Cluster Pays mechanic too. Travel through space with these colourful cosmic critters and you’ll find cascading symbols, some surprisingly large aliens, and a bonus game too!

With its fun theme and exciting features, Reactoonz has become one of Play’n Go’s most popular slots - why not join numerous other players and meet the characters here? Check out our review at the bottom of the page to find out more.

Go crazy as you stack up to win in this reactor slot. Not your avergae game, Reactoonz will have you jumping for joy! And keep an eye on that Quantum Queue. Enjoy the best slots games at Playzee, and claim your welcome offer of 100 free spins and 100% bonus, up to £300.

With thousands of casino games and slots on offer, Videoslots is one of the largest online casinos in the UK. Make your first deposit and claim a 100% match deposit, plus £10 extra cash. Play your favourite Play'n Go slot titles including the super hit slot Reactoonz. See if you can match these friendly characters and fill up your Quantum Queue!

Join BetVictor and wager just £10 to claim £90 in casino bonuses to be used on a range of games. BetVictor have over 700 games on offer including slots, table games and progressive jackpots. And with the hit slot Reactoonz on offer what more could you want?

PlayOJO is a mobile slot site offering players 50 free spins as a welcome bonus. This site has a great experience for mobile slot fans as all the menus and games are well-designed for use on a smaller screen. Why not see if you enjoy an out of this world experience in the space themed slot Reactoonz?

We’re sure you’ve already heard of Mecca Bingo. Sign up and claim up to £60 worth of bonuses including a massive £30 bingo bonus and £20 in slot bonuses. This isn't a deal to miss! Why not join up and start playing Reactoonz, a unique slot that will send you to outer space and beyond?

The Gargantoon is a special larger symbol. On a non-winning spin, it can drop from four to eight wild symbols onto the grid, while if the Quantum Queue reaches the Gargantoon, it will appear on the play board as a 3x3 symbol, and function as a wild, substituting for all symbols. It divides and moves with each cascade, becoming two 2x2 wild symbols, and then nine individual wild symbols.

You’ll see it on the top-right of your screen - it charges up when winning, and after you’ve won 25 symbols a random Quantum feature will be added to the queue. Up to four Quantum features can be queued, while once it’s charged for the fifth time it will add the Gargantoon feature too. Once no more wins are available, the queued-up Quantum features will trigger, and there are four different features in total.

How do you win in Reactoonz?

Rather than using conventional paylines, Reactoonz utilises the Cluster Pays mechanism. Just get five or more matching symbols to win, but they have to be touching horizontally and/or vertically. 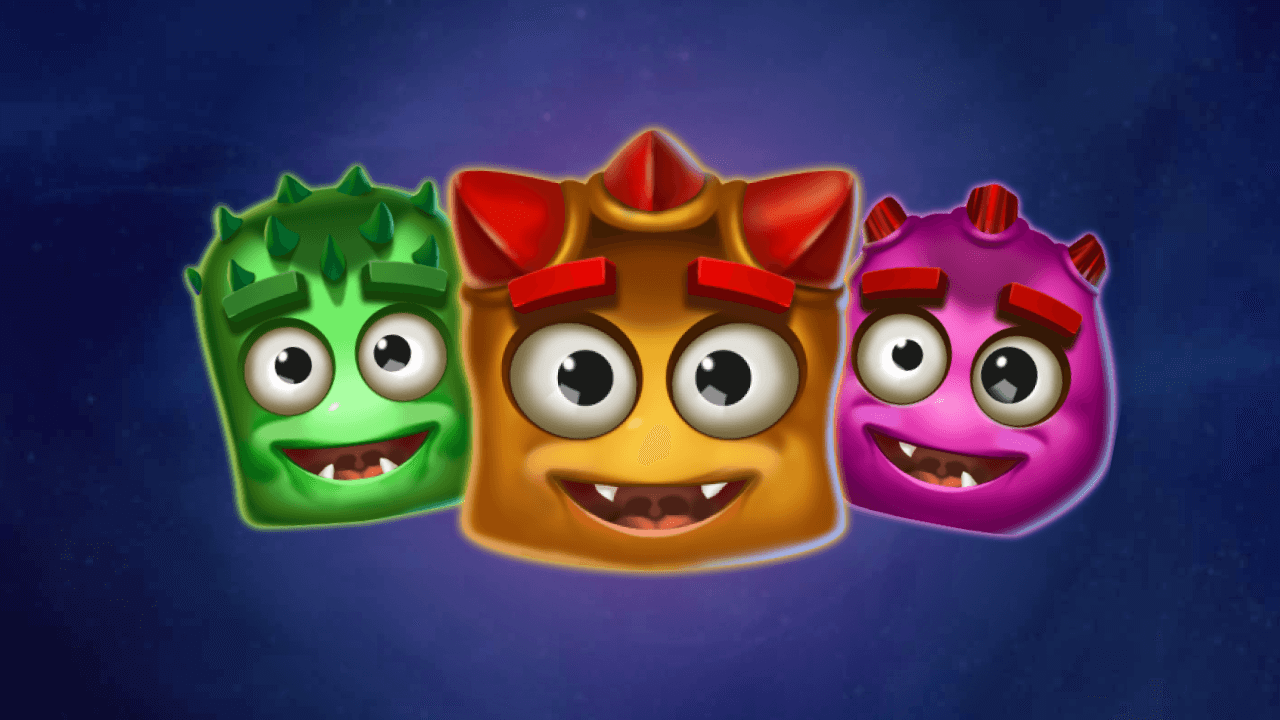 Reactoonz is up there with Play’n Go’s most popular slots, and with the innovative features on show here it’s easy to see why. Less experienced players might find that there’s a lot to take in at the beginning, but it’s not too difficult to get your head around, so should you give this creative slot a go? Keep reading to find out...

The graphics have a real cartoon feel in Reactoonz. The symbols all take the form of extra-terrestrial characters in varying colours, and they all look friendly, as if belonging to a children’s TV show. The background is a deep, dark blue that glows in places, and it looks like it could open up to the vast, empty universe. Either side of the play board are meters and  contraptions which add to the sci-fi vibe here and will become more important as you get into the bonus features. The graphics here might be simple, but they’re definitely effective!

There’s no music, but the sound effects are very immersive and add to the overall feel of the game just like the visuals do. You’ll hear the reactoonz themselves ‘talking’ as you play the game, alongside electronic sound effects that make it feel like there’s some sort of experiment going on - embrace the different sounds and concentrate on getting those clusters!

There are probably more symbols here than you’re used to - the 7x7 play board holds 49 symbols at once, so you’ll be seeing a lot of characters as you play. With the Cluster Pays mechanism, you don’t need to worry about getting symbols across paylines - instead, just get five or more matching symbols, and if they touch horizontally and/or vertically, you’ll win something! For the maximum win, get 15 or more of the same symbol. The pink reactoon is the most valuable, and from a £1 spin you can win a huge £750 - aside from this symbol, there are seven more regular symbols to look out for, and though they might not be quite as valuable, there are still some big wins up for grabs.

When four matching symbols are adjacent to each other in a square shape, they’ll form Giantoonz! These are 4x4 symbols, and wins are always doubled in winning combos that Giantoonz are part of. Meanwhile, in every spin, a random one-eyed symbol is marked as the fluctuating symbol. When one of these is part of a winning combination, it’ll leave two wild symbols behind - of course, wild symbols act as substitutes for all other symbols! When you match symbols, they disappear off the play board, as new symbols cascade down to replace them, giving you extra chances to win on the same spin!

Keep a watch on the Gargantoon! You’ll see it in the bottom-right of your play board. On any non-winning spin, it can drop from four to eight wild symbols onto the reels, while if the Quantum Queue reaches it, it’ll appear as a wild symbol, and be 3x3 too - so bigger than the regular symbols. With every cascade, it divides and moves, first becoming two 2x2 wild symbols, and then nine single wild symbols. As you play the game and win, the Quantum Leap will charge up - once you’ve won on 25 symbols, a random Quantum Feature will be added to the queue. You can queue up to four Quantum Features, and the fifth time you charge it the Gargantoon feature will be added. When there are no more wins, the queued-up Quantum Features will trigger.

Just what are the Quantum Features? There are four in total - the first is Implosion. This one transforms three to six symbols into wilds, destroying all adjacent symbols too. The second is Incision, which cuts a wild into the centre and creates two diagonal lines through the play board, with both showing the same random symbol. Next up is Demolition, which destroys all one-eyed symbols and all matching symbols too, and then finally there is Alteration. This feature chooses a random one-eyed symbol, and all matching symbols turn into another symbol.

There’s a lot going on in Reactoonz, so if you like the excitement and something a little different, you should enjoy Reactoonz. Admittedly, the game’s RTP is a little low at 94.51%, but the trade-off is that you get a slot that deviates from the norm - in a good way. It might feel a little confusing if you’re used to more regular slots, but once you’ve worked out all the features, it’s a game that you can really enjoy.

The first provider to go into mobile gaming, Play’n Go are known for their creativity and innovation. Since they began making games in the ‘90s, there are many to choose from. Reactoonz and its sequel are amongst their most popular, but there’s around 120 others, including Book of Dead and Riddle Reels.