Will you Break Da Bank Again and escape with the cash?

We’re back at the bank once again in Microgaming’s sequel to their popular Break Da Bank slot. Break Da Bank Again shares a lot with its predecessor, and has high volatility with just nine paylines across the play board - are you feeling risky?

Part of a series that’s had plenty of positive reviews, does Break Da Bank Again live up to the hype? Check out our review down below to see if it’s a slot that you should be playing.

Mecca Bingo is not just for Bingo! Find all the best slot games including the slot from Microgaming, Break Da Bank Again! This slot will have you feeling like you're on the run with your [email protected] Sign up and deposit £10 to claim 25 free spins. Try your hand at Bingo, slots, and casino games with one of the country's top trusted sites.

Perfect for desktop and mobile or tablet devices, Touch Mobile Casino has an impressive selection jackpot slots and even online scratch cards and casino tables. Try your hand at the slot that will have you running from the fuzz - again! Break Da Bank Again is the hit slot from Microgaming. Sign up and claim up to £200 cashback

Karamba offers a massive £50 bonus and 100 free spins to new customers. Why not spend your welcome offer on Break Da Bank Again, the sequel hit from Microgaming? The glittering gold will have you hungry for a win.

Over 18s and new players only.
playKerching! REVIEW

Kerching Casino hosts all the top online casino games, from jackpots to Megaways slots! Try out the favourite Break Da Bank Again - the simmering, jewel-packed slot that's sure to have you feeling like you've made a getaway with tons of cash! Sign up and claim 150 free spins and £500 Bonus.

Over 18s and new players only.
playPots of Luck REVIEW

Microgaming celebrates another win with this sequel slot, Break Da Bank Again. Will you escape the bank with tons of cash? New players to Pots of Luck can enjoy up to 300 free spins when they sign up and deposit. That's not an offer to miss!

Are there free spins in Break Da Bank Again?

Yes - three, four or five scatter symbols will trigger 15, 20 or 25 free spins respectively. During free spins, all wins will be multiplied 5x, while every scatter appearing on the board during free spins will get you an extra spin. Bets and lines played are the same as on the spin that triggered the free spins, but free spins cannot be retriggered.

The RTP, or return-to-player of Break Da Bank Again is 95.43%. This is about average, so the return you can expect on your wager is typical for an online slot. However, this Microgaming slot has high volatility, meaning that wins can be expected to be less frequent but larger.

What’s the function of the wild symbol in Break Da Bank Again?

In Break Da Bank Again, the wild symbol substitutes for all other symbols apart from the scatter symbol, and pays the highest win per line. When substituting, wild symbols pay 5x, while during free spins all wild wins will pay 25x. 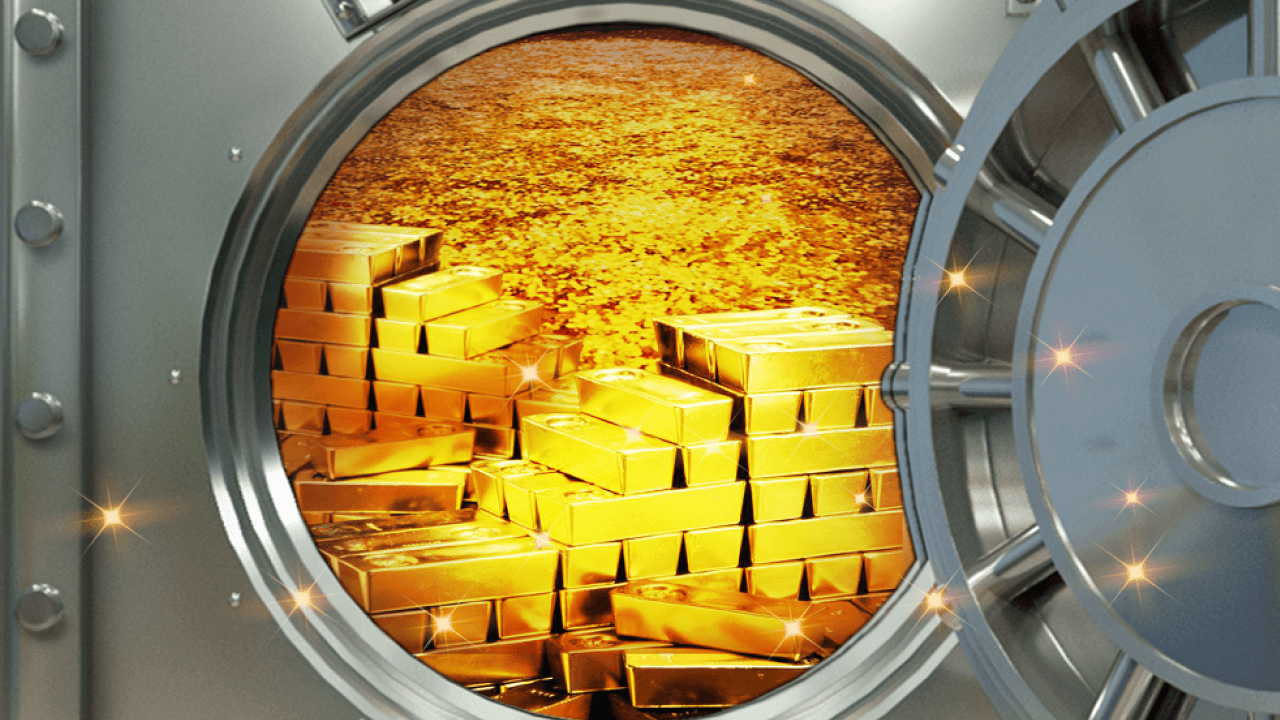 Microgaming’s Break Da Bank Again might follow the original game in terms of popularity, and we can see why as it keeps what we enjoyed while definitely putting its own stamp on things too. Though there aren’t an awful lot of features, there are some great multipliers and of course free spins too - should you give Break Da Bank Again a go? Keep reading to find out...

This is a very regal-looking slot. In Break Da Bank again, you’ll feel like royalty, and it’s clear that a lot of money passes through these vaults. There’s a deep purple background and some shiny symbols in gold, red, green and blue, as well as precious coins, notes and jewels, which sparkle and gleam on a silver bed. In some ways, the graphics are quite simple and understated - there are no unnecessary animations, for example. They’re not really needed, however, as sometimes less is more, and the prestige of the symbols here speak for themselves.

It’s clearly busy in the bank, as the main sound effect is the chatter and hubbub of people going about their day - it makes the game a lot more immersive, while there’s a familiar jingle when you spin the reels and press various buttons too. It’s a good example of how to use sound well without using a backing soundtrack, and the audio and visuals here combine to good effect.

Break Da Bank Again has just nine paylines, and as normal they all pay from left to right, starting with the leftmost reel. As a result, Break Da Bank Again is a high-volatility slot - you can expect wins to be less frequent but larger rather than little and often, meaning that this is a slot probably better-suited to more experienced players. However, the RTP of 95.43% is fairly average, so you can still expect a standard return.

There are ten different regular symbols, and they range in value quite drastically. At the lower end of the scale are the letters and numbers you’ll expect to see in a pack of cards, and then we move into bigger money with coins, cheques, notes, gold bars and jewels. From a £1.08 spin, you could get a maximum of £180 from a single payline combination - if you match five jewel symbols, that is. The scatter symbol pays out too, with wins multiplied by the total bet staked, and scatter wins are added to payline wins. They pay in any position too, so they aren’t bound by just nine paylines!

Have you ever got free money from the bank? You can here, if you get free spins! Three, four or five scatter symbols on the play board will award you 15, 20 or 25 free spins respectively. All wins are multiplied by 5x during free spins too, so you’ve got the potential for some massive wins, All bets and lines played are the same as on the triggering spin, so if that spin cost £1.08, you could win up to £900 from a single combination! If another scatter symbol lands, it’ll award you another free spin, but free spins can’t be retriggered, so make the most of them.

Free spins might be the only real feature in Break Da Bank Again, but it’s worth mentioning the wild symbol here too, as it’s extremely useful and could prove the difference between you winning and losing! As you’d expect, it substitutes for all symbols apart from the scatter symbol, and pays the highest win per line. However, all wild wins pay 5x when they’re substituting for another symbol, and during free spins, all wild wins pay a huge 25x. With these wilds, you really can break da bank!

An exciting sequel, Break Da Bank Again impresses. There’s not an over-reliance on features, with the main draws being the high potential multipliers and the high volatility - along with some good graphics and sound effects. Because it’s so highly volatile, it might not be the best slot for less experienced players, but if you’re ready to take a risk it could be right up your street!

Microgaming have been around since 1994, so for over 25 years they’ve been producing some of the most popular and enjoyable slots around! Many of their popular slots have historical themes, like Thunderstruck II and King Arthur, but of course there’s also the Break Da Bank series, and the likes of Lotsaloot and Mega Moolah too. Why not try another of Microgaming’s 200+ slots?