There are many ways to gamble outside of the casino or online gambling environments. These include bets between friends, fruit machines in pubs, and more recently, online video games like Grand Theft Auto Online have introduced social casinos where in-game currency can be wagered on a variety of classic casino games.

The latter is not considered gambling by the Gambling Commission, as real money is only being used to buy a virtual currency and there is no potential to turn your winnings back into real money. However, there is an argument that a different video game mechanic could and should be considered gambling: Loot Boxes. So, should you be worried about Loot Boxes and do they promote gambling habits to underage/vulnerable people? 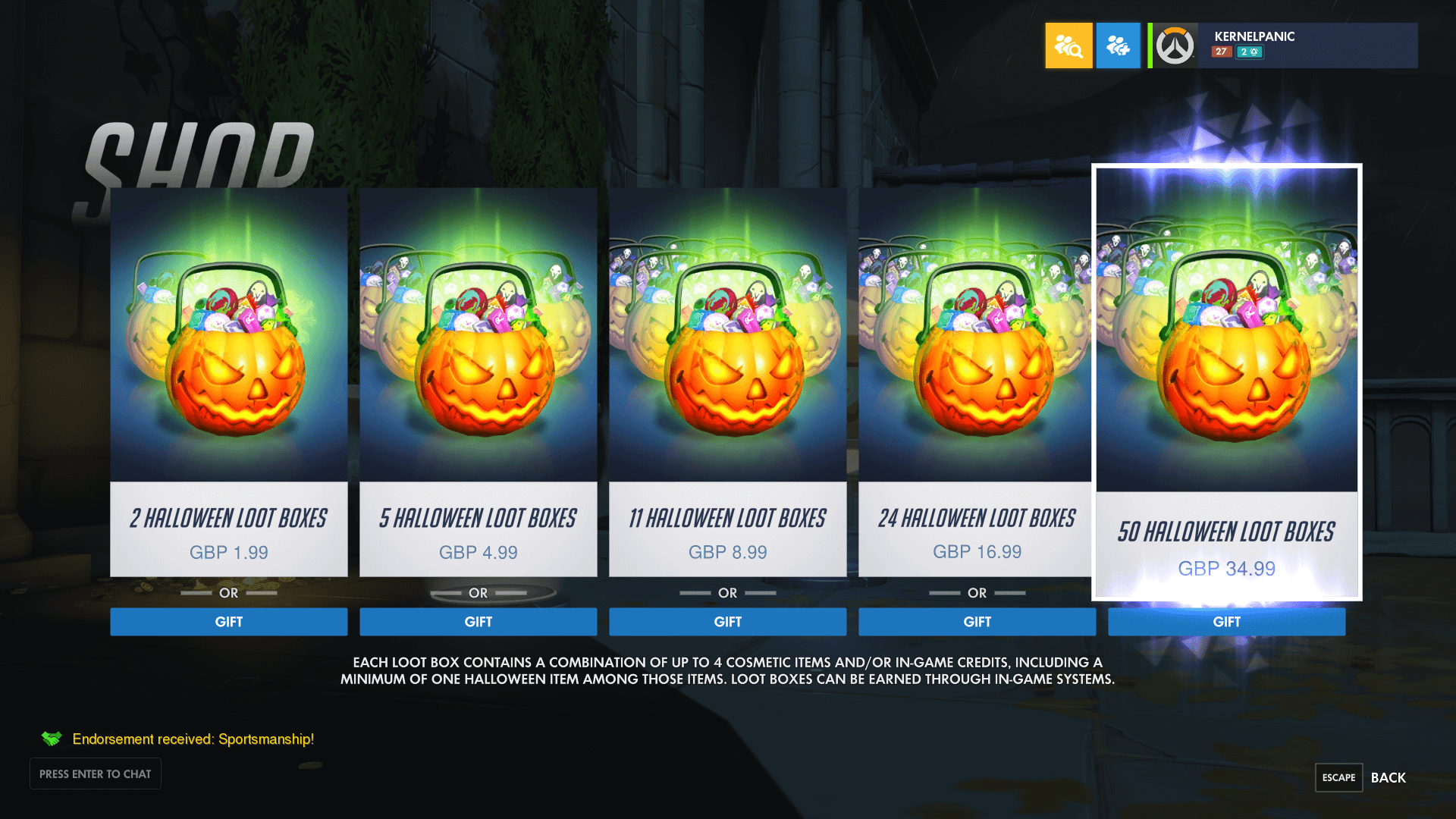 Loot Boxes can be bought in large amounts

Loot Boxes are a form of reward that is prevalent in popular online multiplayer games like Valve’s Counter Strike, Blizzard’s Overwatch and EA’s annual FIFA franchise. Unlike standard rewards in video games, the contents of Loot Boxes are entirely randomised, so you never know what you’re going to get until you open them.

Whilst this may sound like a fun way to add some extra excitement into video games, the problems with the Loot Box model stems from the fact that they cost real money to buy or open, and you could end up with nothing of any perceived value. You’re essentially paying money to directly open a virtual mystery box, and the thrill of a big win can emulate the feeling of hitting the jackpot on a slots machine.  One player reportedly spent $10,000 over 2 years chasing top players on FIFA’s “ultimate team” player packs.

Games like Counter Strike blur the line even more, as rare Loot Box rewards can be exchanged for real world currency via a developer owned marketplace. This can turn a virtual-only activity into a full, unregulated gambling activity. This came to a head in 2016 when websites were set up specifically to gamble for in-game rewards, which were marketed to children via youtube. Videos of huge, falsified wins were uploaded by the site’s owners posing as unaffiliated users, causing huge controversy when the truth was uncovered.

Worryingly, as there still are no regulations for Loot Boxes in video games, this is still an activity that children are invited and encouraged to engage in by developers and publishers. Last year, Belgium categorised the activity as gambling and have banned Loot Box mechanics in video games outright.

Whilst representatives from the House of Commons feel that Loot Boxes should be considered a form of gambling in the UK and regulated as such, there have been no plans for this announced as of yet. The Gambling Commission have determined that Loot boxes are not gambling as “There is no official way to monetise what is inside them”, which feels like a dangerous categorisation which can easily be exploited. It's disappointing to see the Gambling Commission side-step the issue in such a black and white way.

So, should you be worried about children engaging in Loot Box mechanics? Well, a recent study by the Gambling Commission suggests that it’s worth keeping an eye on how your children interact with and spend their money in video games.

The 2019 report specifically mentions Loot Boxes and states that 52% of the children aged between 11-16 have heard of these mechanics, with 44% saying they have spent money on them. A further 6% say that they have gambled with their rewards between friends or through an unlicensed site.

Currently, there is nothing to suggest that engaging with Loot Boxes does lead to illegal underage gambling, as the survey suggests that less children gambled illegally in 2019 than 2018. However, there are clear similarities between the two activities and the Gambling Commission’s justification could be the beginning of a slippery slope and an early gateway into a gambling habit for children.

If you’re at all worried about your gambling habits then please visit Gamcare for advice and support. Remember to check out the week of RGW2019 content by visiting @RGWeek19 and using the hashtag #RGWeek19.

We have a number of playing guides that can help you identify a gambling problem or assist you with gambling responsibly:

Gambling Commission report reveals how UK children are exposed to gambling
Should you be worried about your children being exposed to gambling?
The Five Ws of Responsible Gambling Week
Get up to speed with Responsible Gambling Week and what that means for you.
How can you keep track of time when you are gambling?
Gambling should never be a priority. Find out how you can limit yourself and keep track of your habits.
Max Wright