Will you make the volcano blow in this slot?

Quickfire's Volatile Slot is ready to erupt so don't get too close! Taking place on a volcanic island somewhere in the middle of the ocean, you'll be engulfed by palm trees and of course the water as it flows around you through five reels and ten paylines. It might not be one of the biggest names in the Quickfire catalogue, but with free spins and multipliers galore, as well as exploding wilds, it's likely to be something of a hit. Read our review down below to find out all you need to know about Volatile Slot.

MrQ was the first online bingo site to offer absolutely no wagering across all of its promotions. New players can deposit and spend £10 to claim 30 free spins. Try your hand at the exciting Microgaming slot - Volatile Slot!

Terms & Conditions: 10 Free Spins credited upon your first £10 deposit on Stampede slot only, valued at 25p per spin. Free spins must be used within 48 hours of qualifying. All winnings are uncapped and credited to your real money balance. To qualify customers must successfully verify their mobile number. Qualifying customers will receive 10 free spins on Midas Golden Touch slot game. Max stake per free spin bet is 25p. Full T&Cs apply.

Why not see if this casino is the one for you and grab the chance to bag some big wins with these free spins? CasinoEuro boasts a huge 200 free spins welcome offer, so try out all the top games, including the highly volatile Volatile Slot, online all in one place!

Join 21 Casino to claim up to £300 bonus cash to use across hundreds of popular casino games from top providers like Thunderkick. VIPs are treated to up to £50 bonus cash every day which you can spend on your favourite slot games like Volatile Slot.

Over 18s and new players only.
playDream Vegas REVIEW

Take a trip to Vegas from the comfort of your sofa. Dream Vegas is offering new players up to £400 bonus cash and 50 free spins on any of your favourite NetEnt slot games. You can play hundreds of casino titles including popular video slots, table games and live casino variations. Why not start your adventure with the the island paradise slot, Volatile Slot?

What is the bonus feature in Volatile Slot?

In the bonus feature there are ten free spins up for grabs. All you need to do to be in with a chance is to get any three wild symbols on the board at once - then you’ll get your ten free spins! During your free spins, you’ll see more wilds and exploding wilds being added to the middle three reels, and there’s an increased chance of retriggers and larger wins too.

What does the wild symbol do in Volatile Slot?

Volcanic wild symbols appear on the middle three reels and substitute for all symbols when they appear, as well as being able to trigger free spins. Regular wilds can also become exploding wilds, in which case they can award random multipliers of x2, x3 and x4 - these will apply to the total winnings from the relevant spin. Then, your exploding multipliers can be multiplied again, up to a maximum multiplier of x64.

What RTP does Volatile Slot have?

Volatile Slot has a fairly average RTP of 96.1%, so although you can find slots with better, this Quickfire slot is far from the worst in terms of RTP. However, as the name suggests, this game is extremely volatile. This means that the size of wins is prioritised over the frequency of wins - you can expect to win less often, but for your wins to certainly be memorable. 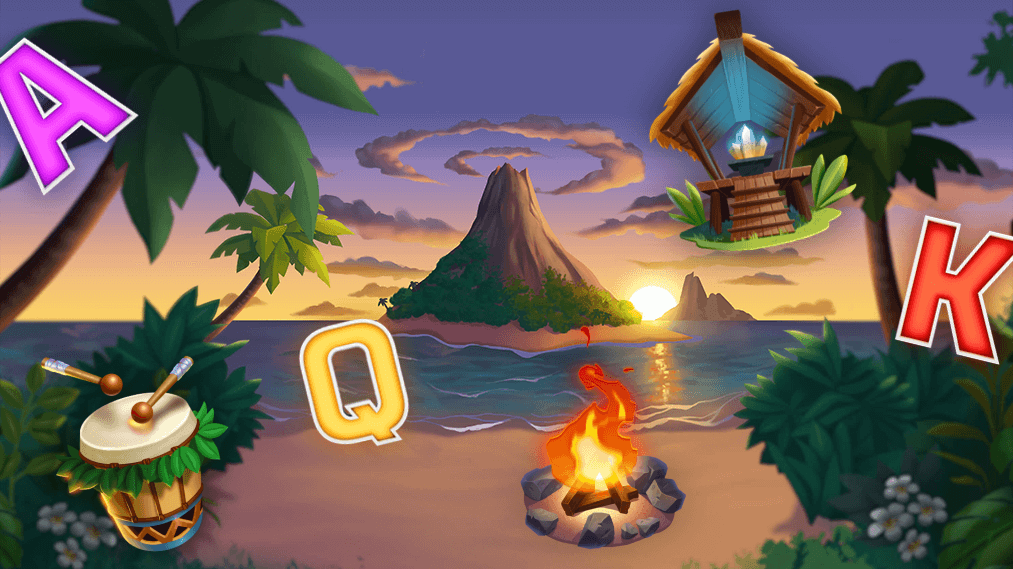 Is Volatile Slot a hidden gem amongst the more prominent Quickfire slots? We think it could be, as you lie in wait for the volcano to erupt while on this picturesque island. However, being such a highly-volatile slot, it might not be for everyone. There’s a chance that you won’t see a return on your bets, but when you win, you can really win. If you’re up for taking the risk, a dramatic yet enjoyable slot is awaiting you...

Imagine that you’re lying on the beach in an island paradise. What can you hear? No matter what sort of sounds you conjure up in your imagination, we can’t imagine Quickfire’s interpretation of island life being too far off. You can look forward to vibrant, rhythmic drum beats and the sound of the waves crashing onto shore. Even birds can be heard whistling - make no mistake, this slot is certainly full of life!

The island could be the definition of paradise, with deep blue water, lush green palm trees and the setting sun making for a beautiful sky. This cartoon island looks great, but you can’t forget about the volcano too. Standing tall right in the middle of the scene, it looks imperious and like it could erupt at any moment. The strength and fury of the volcano proves a great contrast to the natural beauty of the island, creating what is genuinely a great scene.

Volatile slot has just ten paylines, and a number of symbols - some of which can pay out pretty highly. The highest paying symbol is that of a woman with flowers in her hair, and she can give you £40 from a £1 spin if you match her five times - at the other end of the scale, 10, J and Q will offer a maximum of £6 from the same bet amount. If this sounds like a relatively large sum for a low-value symbol, that’s because this slot is highly volatile. Just 10 paylines mean that wins won’t come as frequently, but as you can see, they’ll often be larger when they do.

For this Quickfire game to get more explosive, you’ll have to look out for wild symbols. Wilds will always start off as volcanic wilds, substituting for all symbols, but can sometimes turn into exploding wilds - you might see the volcano erupt! In this instance, they’ll get a random multiplier of either x2, x3 or x4, and this will apply to the total winnings from that spin. Exploding wild multiplies can even be multiplied further, up to a maximum of x64.

To get to the bonus feature, you simply need to get any three wild symbols on the play board at once. From here, you’ll win ten free spins. During your free spins, more wilds and exploding wilds will be added to the middle three reels to increase your chances of getting some matches, and there will be a higher chance of re-triggers and bigger wins too.

Your last bet placed will be used as the bet amount throughout your free spins, and winnings are automatically collected. Should your combined winnings from the ten free spins be equal to or less than 20x your total bet, you’ll be granted ten more free spins until you’ve surpassed that figure.

If you’ve got a taste for drama and tension, Volatile Slot will be right up your street. Though the RTP of 96.1% seems pretty reasonable, the high slot volatility makes this a slot that’s one for the risk-takers! The ocean island theme isn’t rare, but Quickfire put a good spin on it with the added excitement of the volcano and the element of risk they’ve brought in too. With so many wild features up for grabs, this is an enjoyable slot that has plenty to say for itself.

Quickfire are part of Microgaming, a key player in the gaming industry - they’ve grown to become one of the hottest providers around, with hundreds of games encompassing a wide range of themes. Alongside Volatile Slot, you’ll be able to find Mega Moolah, Thunderstruck and a wide range of other popular slots too. With Quickfire, there really is something for everyone.