From Blueprint, Fishin’ Frenzy is an aquatic-themed game that you’re sure to ‘sea’ in a good light due to the free spins on offer and potential big wins too. Whether you’re out to catch fish or catch wins, you’ll relish the challenge here.

This Blueprint slot has become a classic from the provider, but will you agree that’s it one of the best slots around? Have a look at our review below and see what you think!

Deposit £10 or more at Buzz Bingo to claim a £30 in-club and online bingo bonus, plus 10 free spins. All winnings are yours to keep and uncapped! Play all the best slot games, like a Blueprint favourite Fishin' Frenzy.

Sign up to Vegas Luck and deposit £10 for a chance to win up to 500 Free Spin with the Mega Wheel! Play over 550 casino games including casino classics and your favourite Blueprint Gaming slots like Fishin' Frenzy. Get fishing for a big win!

Fish for big wins at Bet365 Casino and try out Fishin' Frenzy, the sea themed slot game that could have you in a frenzy! New players can sign up and claim a 100% welcome bonus offer, so this isn't a deal you want to miss!

Over 18s and new players only.
playWinomania REVIEW

Go fish for a win with Fishin' Frenzy at this casino that is optimised both for desktop and mobile play. The site offers a wicked welcome offer to give the best experience possible and let players get more spins for their buck. Newcomers can get a deposit £10 to claim 150 free spins across 6 exciting slot games!

Over 18s and new players only.
playThe Sun Play REVIEW

Join the casino backed by the nations best-selling newspaper. The Sun Play is a top Nektan casino with over 800 games from some of the best games providers; NetEnt, IGT & Blueprint Gaming. Try out Blueprint's hit slot Fishin' Frenzy and see if you can hook a big win! Claim a huge Welcome Bonus worth up to £400 bonus cash plus up to 150 free spins up for grabs!

Yes. You need to find scatter symbols on screen to win free spins, with a minimum of ten available. Three scatter symbols will get you ten free games, while four will award you fifteen and five get you twenty. Free spins aren’t available to retrigger while you’re playing them, but you could always win them again in the base game if you’re lucky.

How do you win bonus prizes in Fishin’ Frenzy?

During the free spins feature, the fisherman symbol substitutes for all other symbols and catches blue fish for additional wins. Each fisherman scatter symbol will collect the value of each blue fish on screen, ranging from 20 to a huge 500.

What is the RTP of Fishin’ Frenzy?

The return-to-player, or RTP, of Fishin’ Frenzy is 96.12%. This is perfectly acceptable for an online slot, with the average being around 95-96%. As this is a medium volatility slot, Fishin’ Frenzy strikes a sensible balance between size and frequency of your wins, making it suitable for a variety of players. 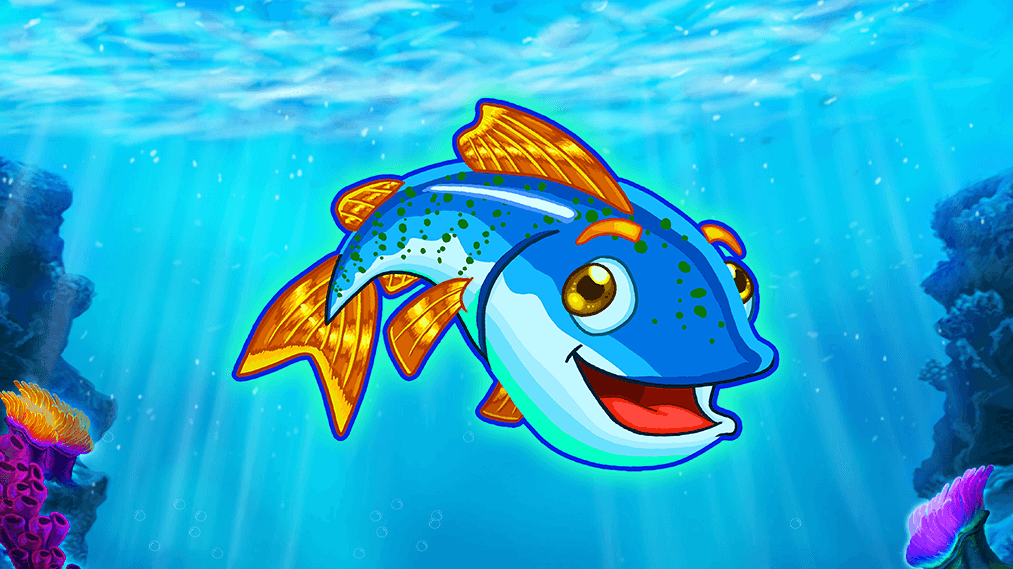 A long time favourite of players, Fishin’ Frenzy takes us into the water to take part in the battle between fisherman and fish. Although there are no extravagant bonus features or breathtaking graphics, this is a slot that’s stood the test of time with some great gameplay and entertaining free spins. ‘Cod’ you be able to win big on this Blueprint classic? Check out what we’ve got to say..

Sounds of the Sea

If you’re expecting to hear the soothing sounds of waves crashing, seagulls calling and other marine life, you’ll be disappointed. You might recognise the jingle that plays while you spin from other slots, and though it’s pleasant enough it doesn’t provide the immersive experience of the soundtracks of some games.

It’s a similar story with the graphics. They’re fairly basic, largely 2D and in block colour, though they’re certainly effective and catch the eye. The play board has the backdrop of the ocean, giving everything a vague blue hue - we can’t say it doesn’t match the theme, but it's also not to the standard of some more recently-released slots. It’s bright and cheerful, so it’s not that we have an issues with this aspect; rather, other slots have done it better.

Scaling the play board

Part of what makes the slot so popular is the familiar simplicity of it. There are five reels, all with three symbols each, making for a standard 15-symbol board. Ten paylines might be a little on the low side, but there’s the chance to win big when you do get a combo on the board. All paylines are the typical lines you expect to see on a five-reel, 15-symbol board too, so there won’t be any surprises!

The low-value symbols are the typical letters and numbers you’ll find on a pack of cards, and then there are the higher-value symbols - these are all fish-themed. The most valuable of them all is the pelican symbol, which can pay out 2000x your total bet should you match five of them. In between is a fishing rod, a rubber ring and a case of bait, while there are of course fish to catch too - this is Fishin’ Frenzy, after all!

Not impressed with your catch so far? Perhaps you’ll have a chance of getting into the bonus game, where there are lots of free spins to win money on! You just need to find three or more scatter symbols to get free spins - three get you ten spins, four get you fifteen, and five get you a whopping twenty. Although free spins can’t retrigger, with up to twenty at a time up for grabs, you could be ‘herring’ the news that you’ve won big!

While you’re playing the bonus game, there’s another little feature to bear in mind too. The fisherman scatter symbol not only substitutes for all symbols but also catches blue fish symbols for extra wins. Whenever a fisherman scatter symbol appears on screen, it collects the prize values from all blue fish symbols present, and these can range in value from 20 to 500, giving you multiple chances to win! Although a win is of course not guaranteed, you’ll definitely be ‘fin’ with a shot.

There might be more aesthetically-pleasing slots out there, but Fishin’ Frenzy holds its own due to some great gameplay, a timeless theme and features that offer big wins - overall, it’s a fun game and it’s not difficult to see why it’s been so popular for so long.

The RTP of 96.12% and medium volatility make it good for less-experienced players, as well as those who are happy to take more of a risk, as a balance is struck between the frequency of wins, and the size of them. You might have bigger fish to fry, but that doesn’t mean Fishin’ Frenzy isn’t worth a go!

Blueprint have plenty of experience, creating games for over ten years, and popularising Megaways slots alongside plenty of progressive jackpots. They boast the most Megaways titles of any provider, and have 81 games in total. Based in the UK, the company was acquired by the German tech company Gauselmann Group, in 2008. Some of their other popular slots include The Goonies, Valletta Megaways, Return of Kong Megaways, and yes, there’s a Fishin’ Frenzy Megaways too!