The rules of bingo

If you’ve chosen to host a bingo night then you’re likely at least familiar with how bingo works. Either that or you've been reading our bingo night guides to help you out!

It’s such an old game that’s played by millions around the UK every year, so the basics are ingrained into the minds of the British public. However just a basic understanding of the game isn’t enough to run a whole bingo night!

You need to be sure that you’re clued up on every aspect to be sure the games run smoothly and fairly, also any disagreements that crop up can be dealt with by referring to the official rules.

As there are two different types of bingo to choose from, the rules of each one are slightly different. First, we’ll go over the universal rules of bingo and then the individual rules for each type of bingo!

We have written a helpful guide to help you choose a type of bingo to play, so read that before you confuse yourself with two sets of rules!

To make the game fair, tickets should be sold before the game has begun and can be sold in advance of the event.

Players can buy as many tickets as they want, though bingo night gambling regulations state that an event can only charge players £8 per day to play, including entry fees.

Setting a ticket limit or pricing each ticket according to how many you want to sell is a good way to avoid any potential problems and maximise your event’s profits!

A caller’s job is to keep the game moving, look out for winners and keep track of the numbers that have been called and drawn so far. It may be useful for your caller to brush up on their bingo abbreviations before your event!

As the numbers are drawn or generated, the caller must make players aware of the number by calling them out, hence the name ‘caller’.

If a player shouts out that they have won a prize, the caller must verify that they have won by checking the player’s sheet against the numbers that have been called. If they are right, the prize is awarded and the game continues!

Depending on the bingo number generator you have chosen, the caller may need to keep track of the numbers manually by writing them down on a sheet, however an online generator or a bingo ball machine should track the numbers for you.

As the bingo numbers are randomly drawn and called, players must listen out to see if they match a number on their ticket. Players should mark off the corresponding number on the card with a dauber and are in charge of keeping track of their own tickets.

If a player matches enough numbers to win one of the prizes (see the rules of each type of bingo below for the win conditions) then they must catch the attention of the caller by shouting out or raising their hand.

90 ball bingo tickets have 27 squares laid out in a 3x9 grid. Each column can only contain numbers from the subsequent group of 10.

On each ticket, a line of the grid has a maximum of 5 random numbers, leaving 4 empty spaces. This means that a ticket has a total of 15 numbers to match in order to get a full house.

There are usually 3 prizes up for grabs in a game of 90 ball bingo, however at your bingo night you can choose to only offer a prize for two of the win conditions, or even just for calling house. 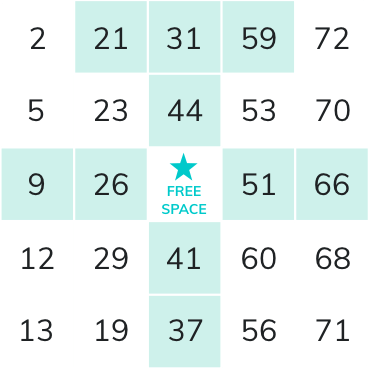 75 ball bingo tickets have 25 squares laid out in a 5x5 grid. The centre square is a ‘free space’ meaning that all players start the game with it already covered.

Unlike 90 ball bingo, prizes aren’t awarded for completing lines or matching all numbers. A pattern or shape made up of squares in the grid is either displayed on the ticket or shown to players throughout the game.

This pattern can be a shape, a letter, a pattern or even a random selection of squares on the grid.

The first player to daub all the squares and fill in the pattern wins the jackpot, and there are no runner up prizes like in 90 ball bingo. However, you could choose to offer prizes for completing a line or two lines at your bingo night.

This makes 75 ball bingo more flexible, as the pattern can be made up of a smaller or larger number of squares, which will change the length of the game accordingly.

You may be familiar with the rules of bingo now, but the next question is: What bingo equipment do you need?

Check out the previous article in the series: Choosing a type of bingo to play. Visit the hub page and read our entire 12-part guide to organising a bingo night fundraiser here!