It’s almost time for the summer holidays! With 6 weeks off of school, parents across the country will likely be scrabbling to find some kind of activity or event to entertain their little ones. Maybe this is the perfect time for that family holiday abroad, or something a little closer to home?

Britain's seasides are an iconic part of the country, with decades of memories spanning generations of families, everyone has a fond seaside memory.

One of the most popular things to do on a seaside getaway is visit the arcades to play the games that shaped their childhood holidays. In fact, a study conducted by Online Bingo shows that 75% of adults in the UK visited seaside arcades with their family in 2021 - which goes to show that the seaside is still going strong!

Our study asked which of a selection of classic arcade machines they would play/let their family play, and using that data we have  compiled a list of the most popular seaside arcade machines, as chosen by the British public.

The public voted, this one's mint... 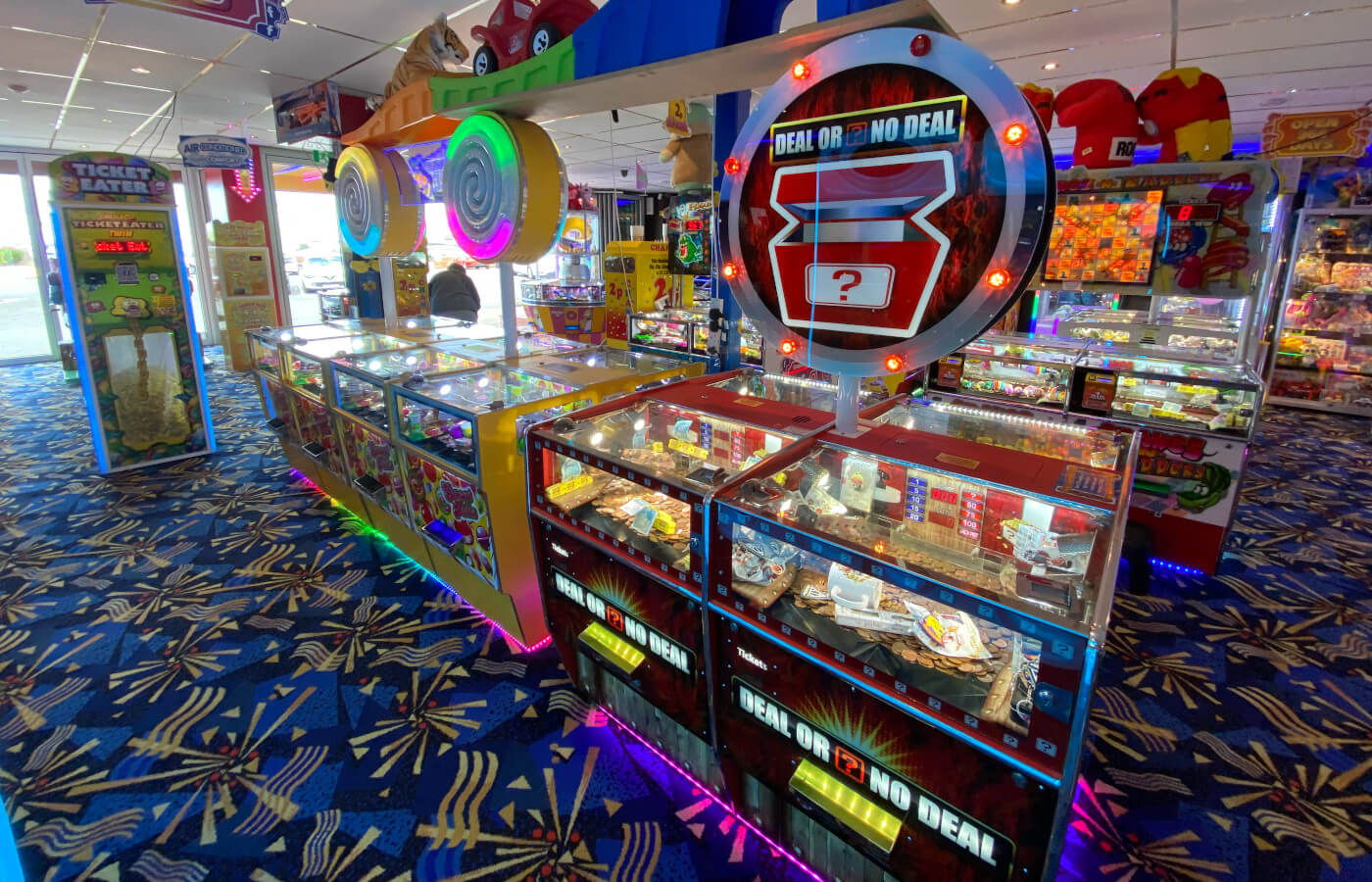 When you think of seaside arcades, this is likely to be the game you think of first. Since the game’s invention in 1964, the 2p machines have dominated the floorspace! For that reason, it’s no surprise that this topped the list.

This is THE arcade game in the UK, and can be found all over the country no matter where you are. There’s no doubt that you and your family have enjoyed dropping tubs full, of 2p coins into these machines.

This iconic game has players push 2p coins into slots on top of the machine, which roll down to a large shelf covered in coins. A large pushing platform at the end pushes the pile of accumulated coins towards the edge off the shelf, and any coins that fall off are yours to keep or play with!

A skilled player will try to time their drops perfectly in rhythm with the pusher to maximise the chances of a win, they may also alternate which slot they use too, though everyone has their own strategy to maximise the number of coins that fall out of the machine!

What makes it so popular?

The big draw for this coin-dropping game is the low price per play! For just £1, you or your family can have 50 turns on the machine (we’ve done the maths so you don’t have to), making this an affordable and long-lasting activity that everyone can play and understand.

Some machines will also have prizes like keyring, toys or even cash laid on top of the coins in play that can be won, in exactly the same way as the 2p coins themselves. The chance to win a little extra as you play, giving you a larger goal to work towards will have you settled on one machine for a while. Though, with such a low prize value, people generally play for fun.

That said, fans of prizes may find themselves more drawn to the next machine on the list. 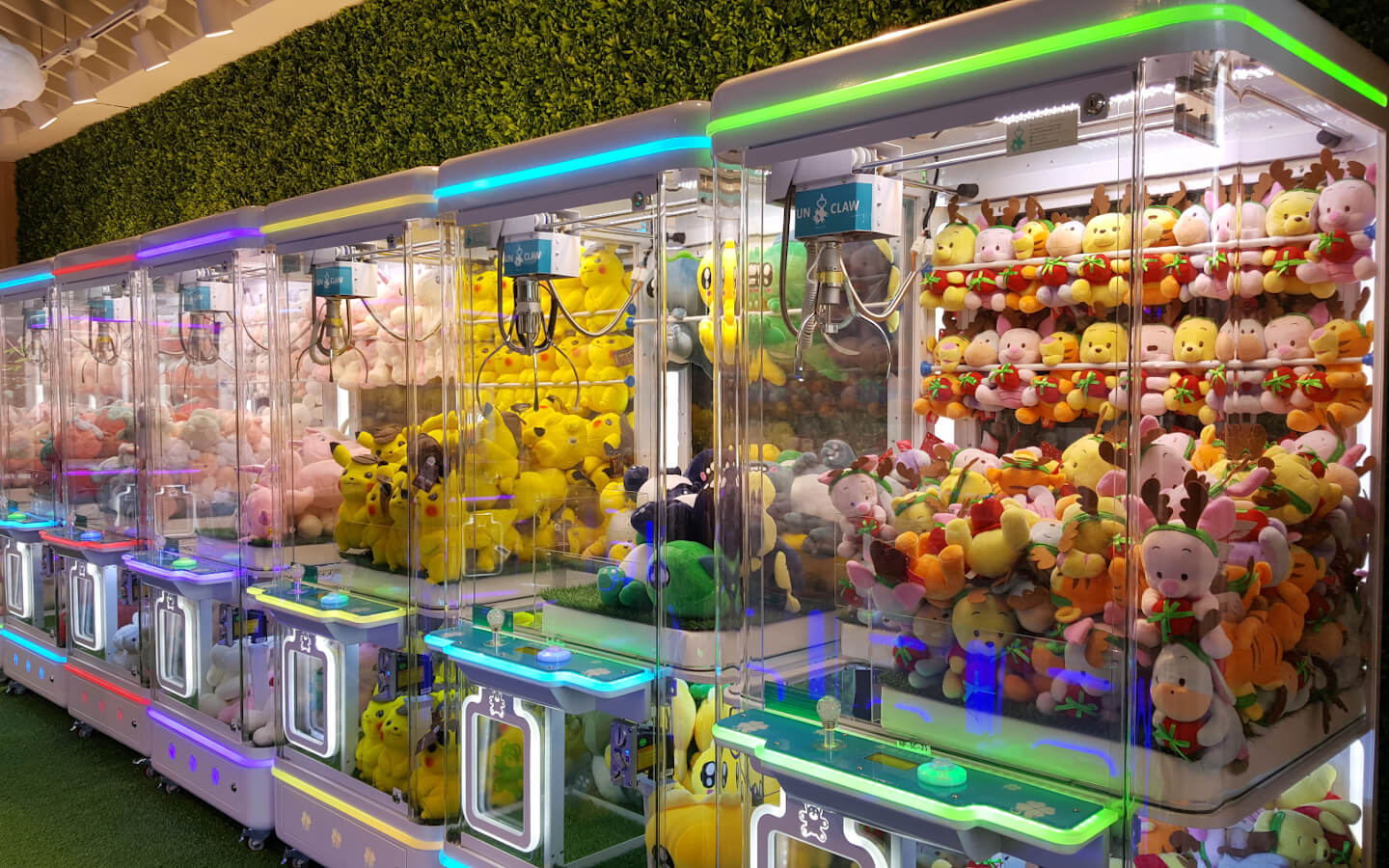 This is another immediately recognisable arcade machine! The claw grabber’s appeal and fame goes beyond seaside arcades and can they often be found in bowling alleys, play areas and even museums. Starring roles in movies like Toy Story make this game a true cultural icon around the world!

I probably don’t need to explain this one, but the claw grabber involves the player controlling a metal claw using levers or buttons. The claw is hanging above a pit full of prizes, which are generally stuffed toys! Once you are happy with your positioning, just hit a button and the claw dives in to fish something out! If it’s successful? Great! Enjoy your prize! If not, it’s time to try again and again (and again).

What makes it so popular?

The most obvious draw of the claw grabber machine is the fact that the prize is visible, within literal grabbing reach! This does a great job of advertising the prize to children, which are often huge franchises like the latest Disney or marvel releases, or popular games like Among Us.

Plus, the perception that skill is required to beat the game makes arcade goers feel like they could easily beat the odds and nab themselves a cheap prize, with just one more try… 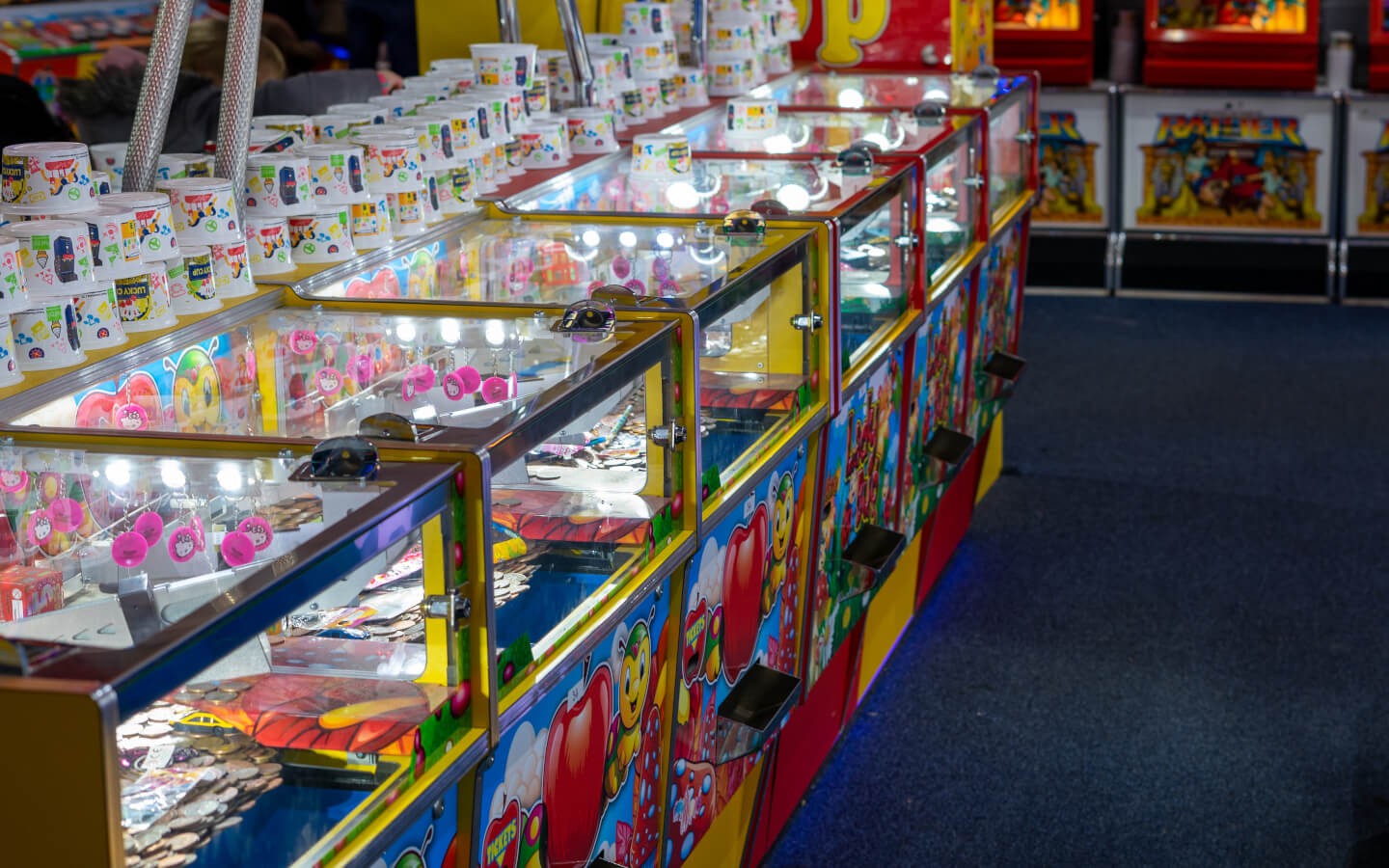 This machine is exactly the same as the 2p machines, except the price per play is 10p! This means you get less bang for your buck, however it also means you have a chance to win more too. Generally, the 10p machines have more valuable prizes added to the pile too, to try and entice you to play this higher stake version. 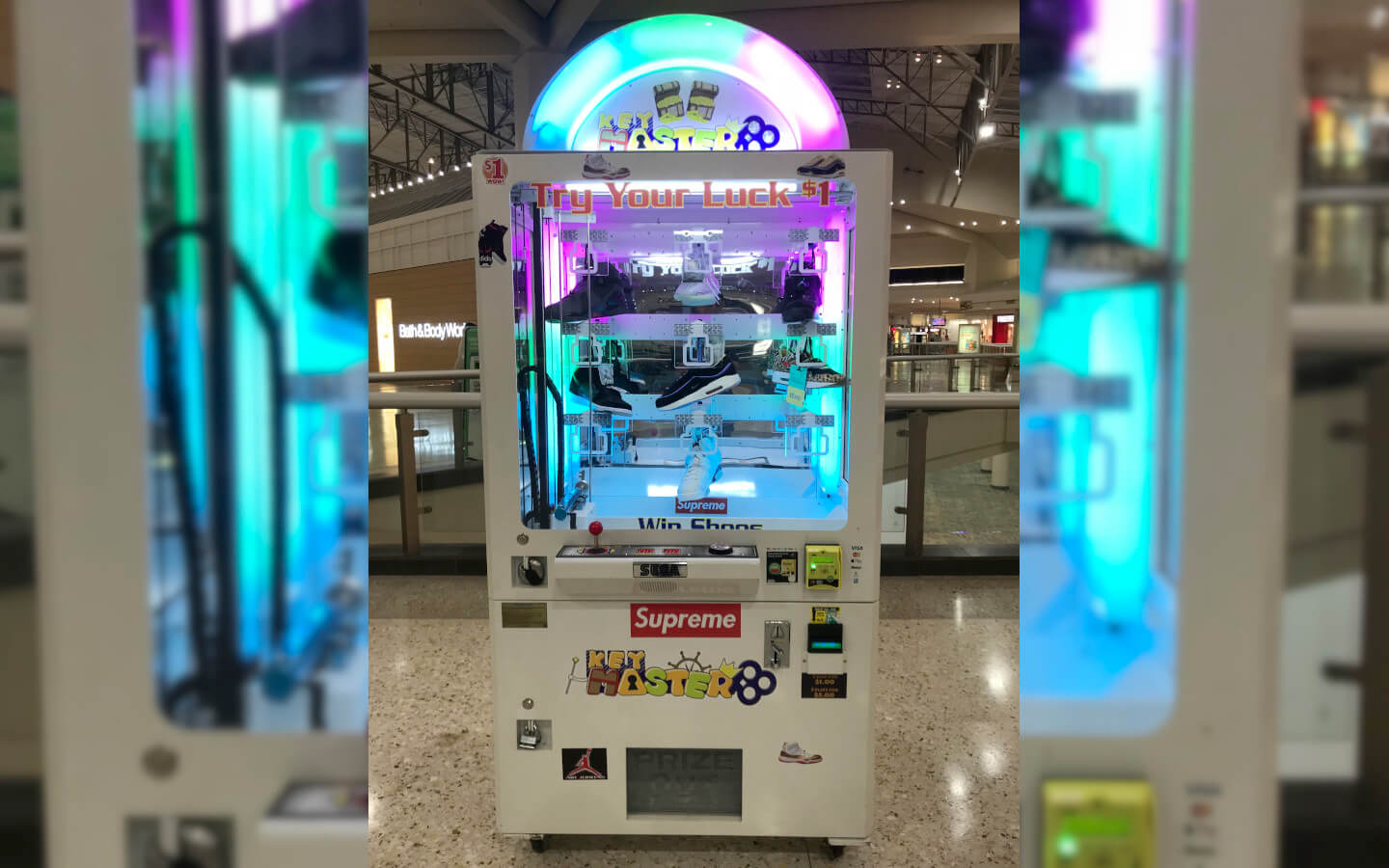 Of all the games on this list, this might be the least familiar to you. That’s because it’s the newest arcade hit that has many forms and can be found in bowling alleys, cinemas, holiday resorts and arcades around the world.

This game has you timing the press of a button to stop a moving arm, with the goal of fitting a key into a lock to release a prize, or cutting a piece of string with a prize hanging from it.

If you’re successful, then you win the prize! However, if you fail (and, trust me, you’ll fail a lot), then you need to pay up and try again.  At £1 a go, this can quickly add up though!

What is the appeal?

It’s true, this game might seem like the least exciting of the lot. Simply timing the press of a button to maybe win a prize doesn’t scream “game”, but that’s why Sega has sweetened the deal with much more valuable prizes!

Some key master machines may include the same stuffed toys as a claw machine, but often these machines are filled with technology like iPhones, tablets, headphones and game consoles. Sometimes these machines even have watches, trainers or even large sums of cash in them!

A reel good time at the seaside 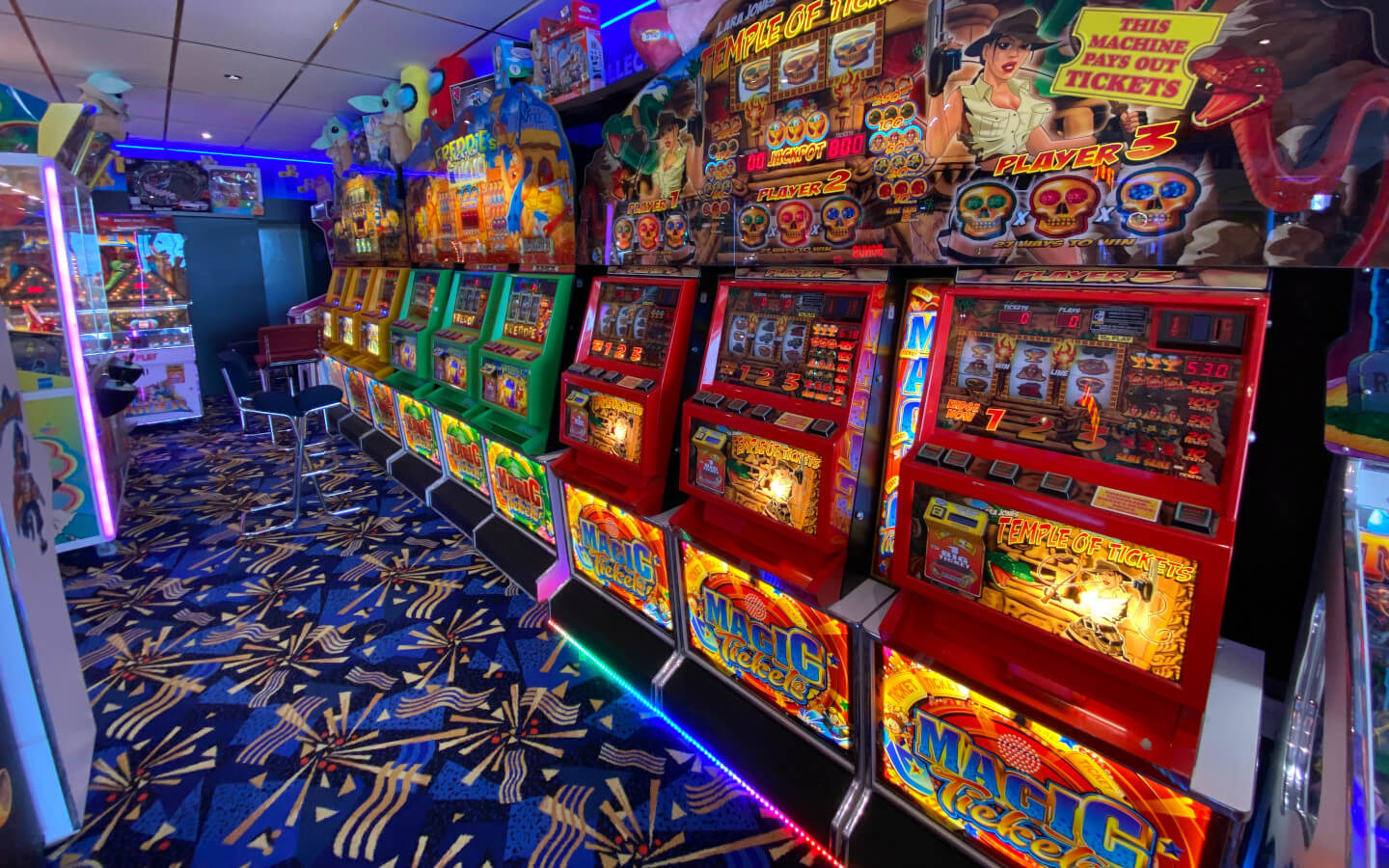 This is one of the most controversial arcade games available in seaside amusements, as this is just gambling for children. It is no surprise then that this is the least popular of all the arcade machines on our list!

The UK Gambling Commission allows slot machines to be accessible to people under the age of 18, as long as they stick to a few rules. First, the stake limit is 10p, meaning children can’t be gambling £1 or even £5 at a time.

Secondly, the game can only ever pay out a maximum of £1 per play, which the UKGC hopes will reduce the feeling of winning that can cause gambling problems down the line.

However, even with these regulations in place, slot machines are still gambling. We completed a research project about the dangers of exposing children to gambling through arcades, which contains even more data from our study.

This article was created using data from an independent survey into category D gambling machines carried out in September 2021. All the machines listed are regulated by the UK Gambling Commission.

Simply copy and paste the code below into the HTML editor of your own website to share an 800px wide version of our top 5 seaside arcade machines infographic with your readers.