How does the Mega Moolah progressive jackpot work?

If you’re a regular visitor at online slots sites you may have noticed that some of the games offer a constantly growing progressive jackpot alongside the normal prizes. One such game is Mega Moolah from Microgaming, which in the last 12 years has made 60 slot players around the world into multi millionaires!

What is Mega Moolah?

There are 4 tiers of progressive jackpot that are constantly growing and being won, though the one every player hopes to win is the gigantic mega jackpot, which starts at £1,000,000! If you want to try Mega Moolah out for yourself, why not visit MrQ where the game is waiting in the slots lobby. 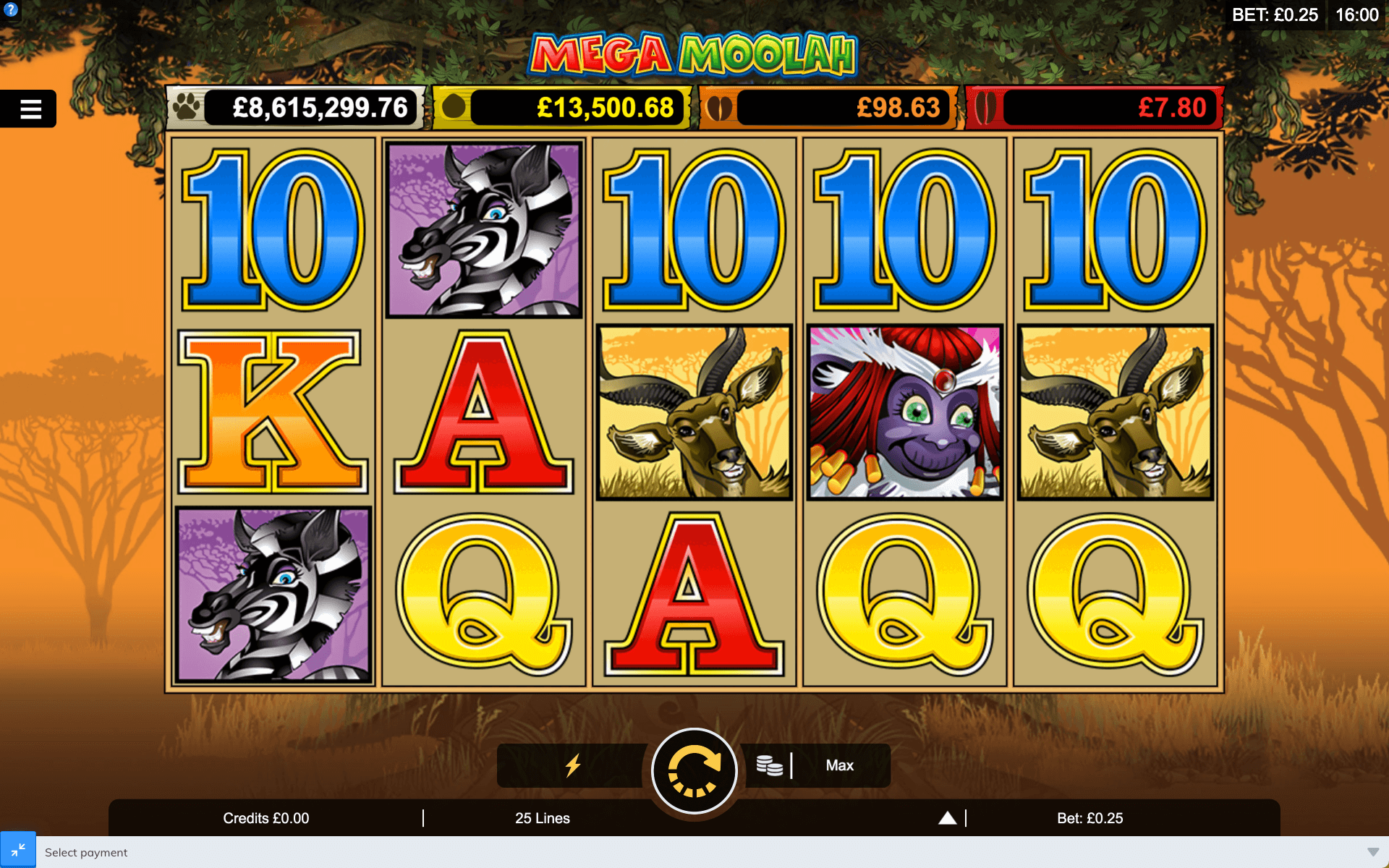 How does a progressive jackpot grow?

Every time you stake money on Mega Moolah, a portion of that bet is added to the progressive jackpots, and this continues to happen until each of the prizes is won! This means if nobody wins the big mega jackpot for months on end, the jackpot will just keep on growing. The mega jackpot starts at an already impressive £1,000,000, but it often inflates and can get much much bigger before being claimed!

In fact, Mega Moolah’s jackpot currently holds the Guinness World Record for the largest jackpot payout in an online slot machine game, after paying out a huge £13,213, 838 back in 2015. Most recently, the jackpot total hit an impressive £16,496,346 before being claimed by someone in Canada.

How do you win a progressive jackpot?

Simply put, there is no way to predict when you will win the jackpot as it is entirely random, however you do have a higher chance of hitting the bonus jackpot feature by upping your bet. Even if you do get lucky enough to end up triggering it, there are three other, much smaller jackpots that you’re much more likely to win. 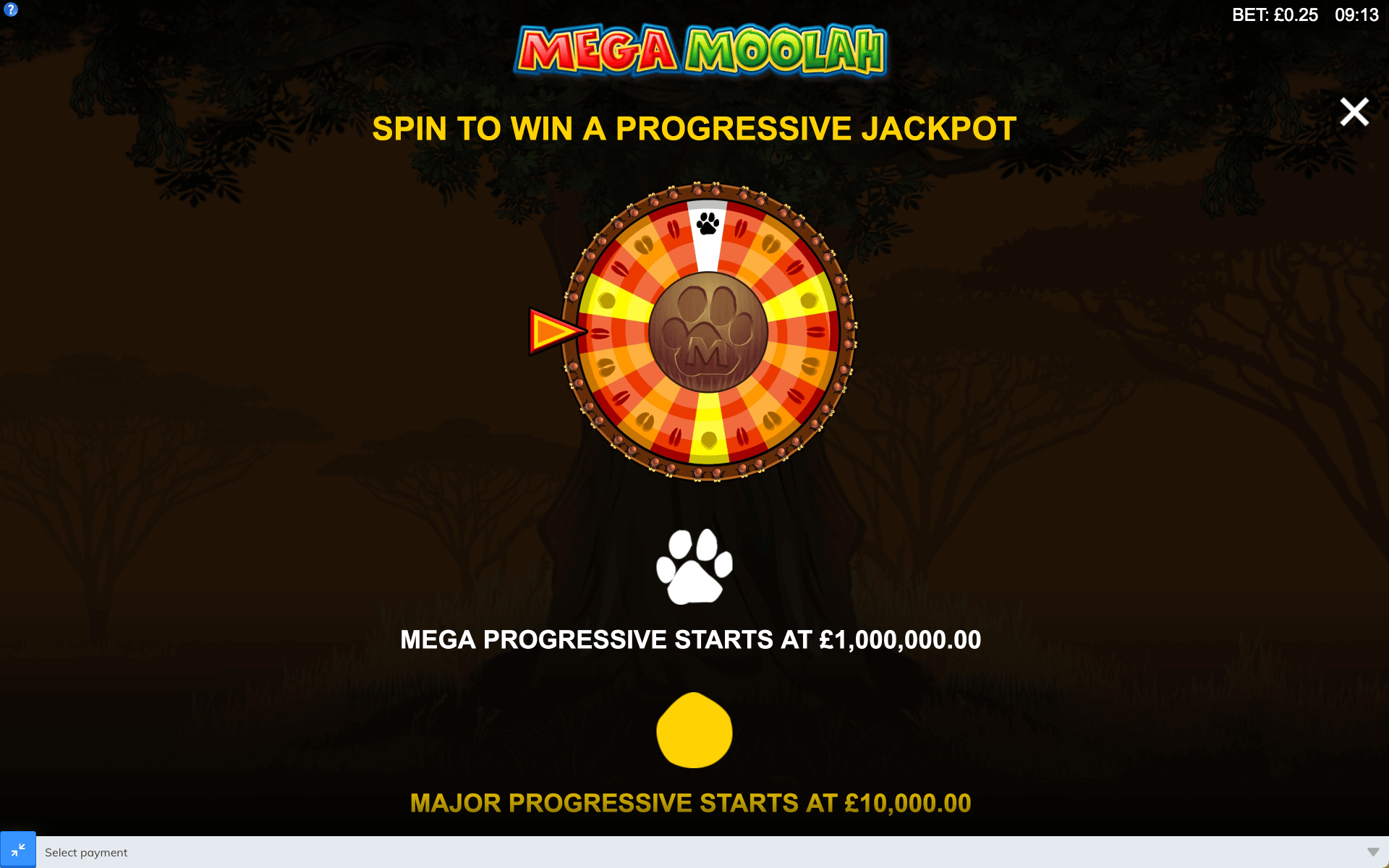 How much do you actually win?

Here’s where the Mega Moolah progressive jackpot can get confusing. Despite currencies worldwide being worth different amounts, no matter what country you are in and what currency you are playing the game in, the Mega Moolah jackpot always shows the same value worldwide.

If you convert 10 million Canadian dollars into Euros then the the jackpot in Canada is only €6,593,000. Does this mean Canada is getting a bum deal? Also, where do the millions that are unaccounted for go?

A Microgaming representative has confirmed to OnlineBingo.co.uk that the Mega Moolah jackpot’s base currency is GBP, which means that if you win the top prize in the UK then you are winning the full mega jackpot amount. However, if you live in a country with a weaker currency like Canada, then you will still win the advertised amount in your local currency. 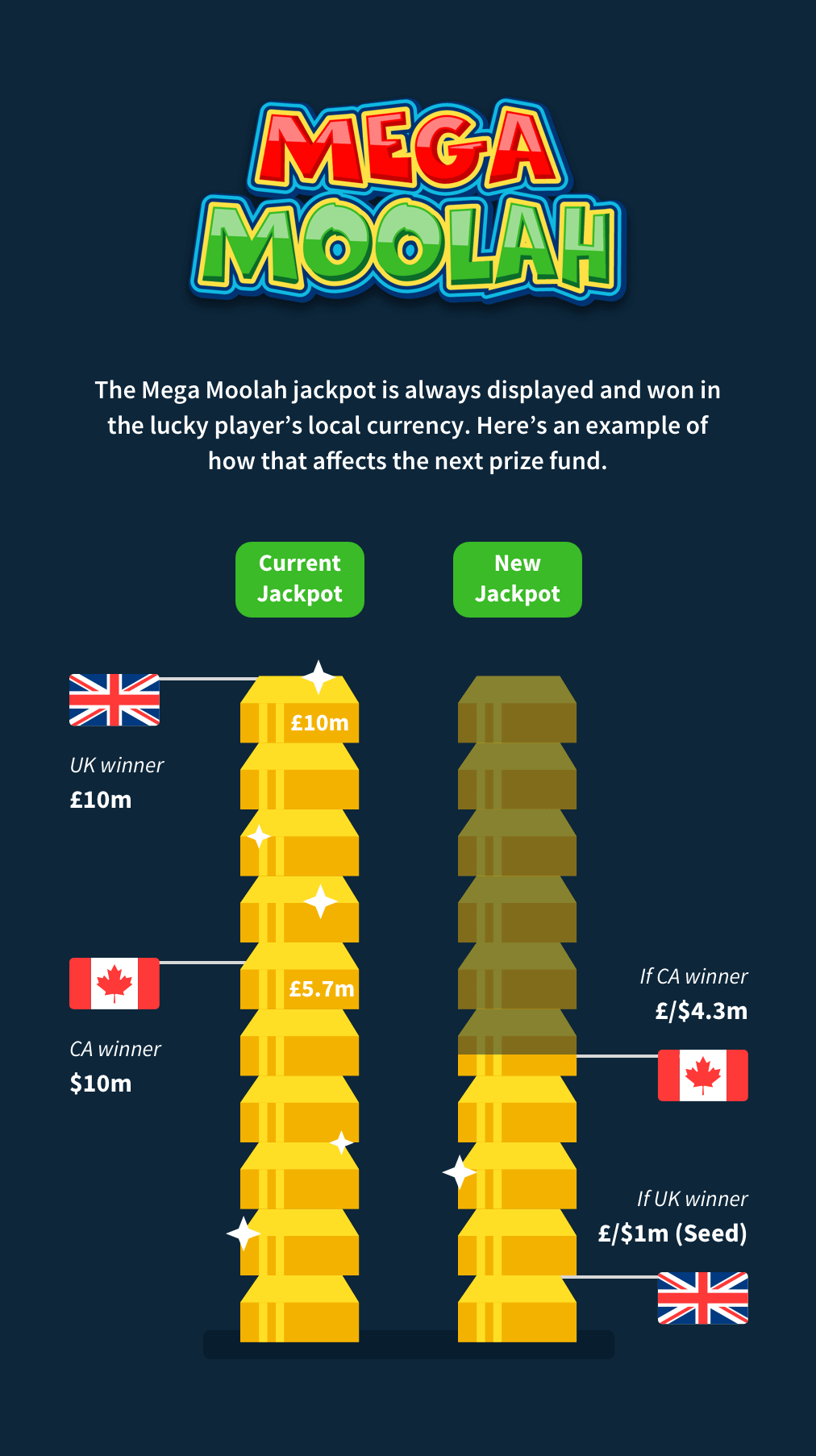 The $16,496,346 amount that was recently won in Canada actually only removed £9,486,683.21 from the progressive jackpot pool, with the remaining funds put back in to seed the next mega jackpot. Had someone in the UK won the jackpot, they would have won the full amount and the jackpot would have reset back to £1,000,000.

This doesn’t mean that players in other countries are getting an unfair deal though, as they are contributing less to the jackpot too. For example, a player in the UK playing £1 spins is contributing more to the jackpot than someone in Canada who is doing the equivalent $1 spins, which are only worth 57p in comparison.

There's no real way to increase your chances of winning the game, other than increasing your bet to make the feature more likely to appear. It's still completely random. However, the easiest way to give yourself a chance at the huge jackpot is simply to play Mega Moolah at an online slot site!

As mentioned above, Mega Moolah is available to play on MrQ right now, but there are also plenty of other online casino sites that offer the popular slot game. Why not check out our list of microgaming casino sites and find the one with the best casino welcome bonus for you so you can start playing and hope to hit the life changing progressive jackpot.

Are Slot Machine Payouts Random?
They say the house always wins but in reality, it's a complicated mix of science and very technical computing.
Can Casinos Control Slot Machine Payouts?
Your chances of winning on the slots are affected by many different factors, but are casino bosses one of them?
Are Slots Just Luck?
You might think you've worked the system and know how to trigger a win, but slot games are nothing more than dumb luck.
Max Wright