Want to join the fun and become an expert craps player? This is just the guide for you.

If you’ve ever set foot in a casino, you’ll know that the loudest corners of the room are usually the ones near the craps table.

This game is mainly about predicting the outcome of the rolls of a pair of dice. Sounds simple – right? This simplicity was actually one of the main reasons that craps became the popular casino game that it is today.

The small amount of equipment needed to play meant that during World War II, it became a popular game for young soldiers to play. This version of the game was known as Street Craps, leading to its popularity in casinos after the war.

Craps is still popular today, both it's street version which can be played at home or at the bar, as well as Casino Craps.

Although you only need two dice to play craps, there are a few more rules which you’ll need to know before you play.

The idea of craps is that players place bets on the outcome of two dice, which people around the table will take it in turns to roll. The player rolling the dice is known as the Shooter.

Bets are made by players placing chips on the different marked areas of the table layout. There are lots of different types of bets which can be placed in craps and each game can be completely different. 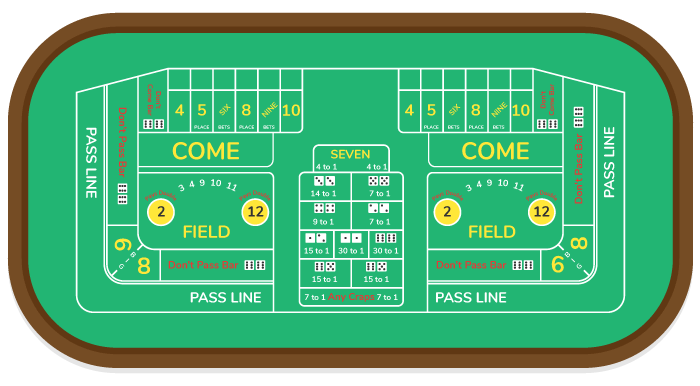 Craps tables usually have a double layout, so you’ll only need to pay attention to one half of the table while you’re playing. Each side will have it’s own dealer managing bets, as well as a ‘boxman’ in the middle of the table, supervising the game.

There’s also a stickman who’ll push around the dice and chips, and help to keep the game running smoothly.

These areas of the table are where you’ll place your most common bets, however, there are plenty of other areas where chips can be placed to keep the game interesting.

There are also individual boxes where players can bet on the numbers 4, 5, 6, 9 and 10 coming up before the next 7 is rolled, as well as the ‘Big 6’ or ‘Big 8’ boxes on either side of the table, which pay out at higher odds if one of these numbers is rolled before the next 7.

As you’ve probably worked out from the table layout, there are a number of different bets which you can place in craps! This is what makes the game so exciting and often the loudest in the casino, as there are always so many different bets being placed around the table at once.

To get you started, let's focus on some of the most common bets which you can place at the craps table.

There’s also the ‘Don’t Pass Line’ bet, which is the opposite of the Pass Line. Most players bet with the dealer on the Pass, so if you bet on Don’t, you may get some enemy stares from the other players at the table!

If you want to bet on a single roll of the dice, you can place a ‘field bet’, where you’ll win even money if one of the numbers on this section of the table is rolled.

Other bets include proposition bets, hardways and come bets, which all rely on different number combinations coming up. There are so many different ways to win at craps, but once you’ve learned a few of the basics, you’ll realise what an easy and exciting game it is!

It’s normal for first timers to walk up to the craps table in a casino and feel a little bit lost at what’s going on. One thing you’ll notice is that craps has its own language which you’ll probably want to brush up on before you play.

There are a lot of different terms and slang which can be thrown around the craps table. We’ve got a little list of the basic lingo for popular bets, so you can become a craps expert in no time:

Of course, these aren’t all of the terms you’ll hear around the table, but knowing these terms will make the game a little easier.

Remember, don’t be afraid to ask other players or the dealer what different lingo means if a term comes up that you aren’t sure of!

So, now you know the basics, what are you waiting for? Get down to that craps table, join the excitement and start placing those bets!

Lauren Chassebi is an experienced journalist with articles featuring in publications including The Independent, The Guardian and The Evening Standard. At OnlineBingo, Lauren writes about online bingo, casino and slots, with a special interest in the behind-the-scenes of bingo halls.

What Can You Play At An Online Casino?
Just like their real-life counterparts, online casinos offer a range of classic games such as blackjack, poker and slot machines.
A Beginner's Guide To Playing Online Slots
New to the slot scene? Here's your guide to get you started!
How To Win At Blackjack
If you apply the correct techniques and keep your call, you can increase your chances of beating the dealer.
Lauren Chassebi

Lauren Chassebi is an experienced journalist with articles featuring in publications including The Independent, The Guardian and The Evening Standard. At OnlineBingo, Lauren writes about online bingo, casino and slots, with a special interest in the behind-the-scenes of bingo halls.