Sign up and deposit at 888Casino using our exclusive code ‘live30’ to claim a 100% match bonus and £30 extra cash. Choose from hundreds of casino games including Evolution Gaming live dealer titles like Dream Catcher, Immersive Roulette and Lightning Roulette.

Over 18s and new players only.
playNY Spins Review

Now available in the UK, new players depositing at NY Spins for the first time can take advantage of a 100% deposit match up to £50. This gives new players up to £100 to play with for only depositing £50, plus 50 free spins on Book of Dead that come with no wagering requirements!

If you continue to play you can collect points that allow you to unlock bonuses, such as free spins and bonus funds.

Over 18s and new players only.
playMr Favorit Review

Mr Favorit offers casino fans a wide variety of games to play including slots, live casino games and scratchcards. New players who sign up and deposit at least £20 can receive a 100% bonus, up to £25. You'll also get 25 free spins!

Over 18s and new players only.
playFun Casino REVIEW

Fun Casino is home to all your favourite casino games from video slots to immersive live dealer tables. Choose from casino classics like blackjack, roulette and poker or try out unique games like Evolution Gaming’s Live Monopoly and Dream Catcher. Join and deposit to claim 100% match bonus.

Terms & Conditions: New players only. Maximum bonus is £123. Max bet with bonus is £5. No max cash out. Wagering is 50x. Skrill & Neteller excluded. Eligibility is restricted for suspected abuse. Cashback is cash, so no wagering. Cashback applies to deposit where no bonus is included. Full T&Cs apply.

Over 18s and new players only.
playMega Casino REVIEW

Mega Casino has over 60 live casino games by the leading provider Evolution Gaming. New players can claim up to £50 bonus cash which can be used on any slot or table game they fancy. Make sure to use promo code: MEGA to claim this mega welcome bonus!

Terms & Conditions: First Deposit Only. Min. deposit: £20, max. Bonus £50. Game: Ninja Master, Spin Value: £0.20. WR of 60x Bonus amount and Free Spin winnings amount (only Slots count) within 30 days. Max bet is 10% (min £0.10) of the free spin winnings and bonus amount or £5 (lowest amount applies). Free Spins must be used before deposited funds. First Deposit/Welcome Bonus can only be claimed once every 72 hours across all Casinos.

Over 18s and new players only.
playBethard Casino REVIEW

Bethard are giving £5 wager free cash for every £100 spent during your first week. Play the latest casino games and try out unique live game shows like Evolution Gaming’s Dream Catcher, Monopoly Live and Deal or No Deal Live. All players can claim weekly free spins and real cash.

Terms & Conditions: Welcome bonus consists of 10 bonuses of £5 up to a maximum total of £50. This offer is available for New Customers registering from the UK after the 1st of May 2018. Bonus will expire after 7 days from registering. This offer is only available to New Customers from the UK making an Initial Deposit of £20 or more. Full T&Cs apply.

Videoslots Casino boasts over 6,000 games in its library, with plenty of titles from the Evolution Gaming studios! New players signing up to the site can get 11 free spins plus a bonus of up to £200!

825 bonus spins
on your first 5 deposits

Over 18s and new players only.
playCasiGO Review

Launched in 2020, this site from established provider White Hat Gaming has hundred of games on offer. Join the site today and you can claim a massive 825 free spins on the ever-popular Book of Dead across your first five deposits.

Terms & Conditions: 18+. New players only. One Welcome Package per player. Max Bonus Bet £5. Get 3 Bonus spins for every £1 deposited up to 165 spins for each of your first 5 deposits. Min. deposit is £20. All spins are on Book of Dead only. Bonus funds must be used within 30 days ad bonus spins within 10 days. Spins winnings credited as a bonus and capped at an amount equivalent to the number of spins awarded. Bonus funds seperate to Cash funds, and are subject to 35x wagering and withdrawal requirements. Full T&C's apply.

How do I win the Caribbean Stud Poker progressive jackpot?

Caribbean Stud Poker features an uncapped progressive jackpot, starting at £50,000, that players can opt into with an additional £1 side bet.

During each round, a croupier deals five cards and qualifying players will win a share of the progressive jackpot if a Royal Flush is revealed, all, regardless of the outcome of the game.

A second level of fixed-value jackpot prizes can also be won with hands below a Royal Flush.

Evolution Gaming specialises in live dealer table games, however, the company did attempt to break into the slot market in 2011 with the launch of Mermaid’s Fortune Live.

The mermaid offered players the chance to enter live bonus rounds, but is unfortunately no longer available to play as it mysteriously disappeared from Evolution Gaming casinos.

A brief history of Evolution Gaming 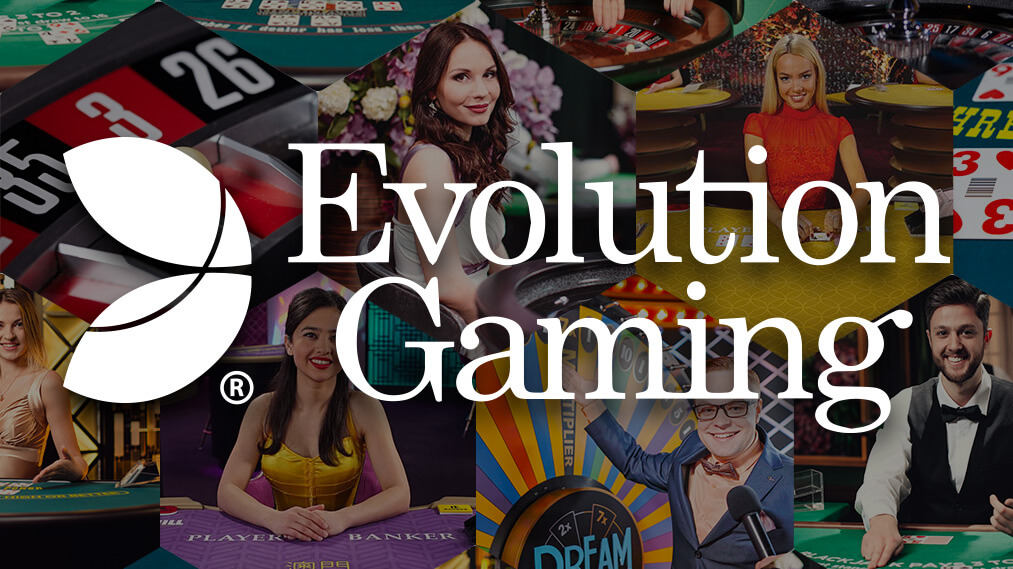 Within its first year of business, Evolution Gaming signed deals with prominent brands including Gala Coral, William Hill and PartyGaming. Its studios in Riga, Latvia, quadrupled in size in 2009 to meet the new demand after partnering with 888Casino, Ladbrokes, Paddy Power and SkyBet.

Evolution Gaming’s software quickly gained industry recognition, receiving its first award in 2010. Since then, the company has won the EGR Live Casino Software Supplier award for nine successive years, beating NetEnt and Playtech in every instance.

The company became the first live casino developer to gain a Preliminary Waiver Approval in the US for New Jersey, in 2013. It opened a live studio in the state five years later thanks to extended partnerships with 888Casino, Unibet and PokerStars.

Today, Evolution Gaming titles are available at over 150 casino operators, including the majority of UK brands and several land-based locations.

The business employees over 5,500 people worldwide, across offices in Latvia, Belgium, Malta, Canada, the UK and the United States.

Every Evolution game is broadcasted from one of its production studios worldwide and is hosted by croupiers trained in-house via the Evolution Academy.

The live dealer studios are fully-equipped with top-of-the-range equipment to deliver high-quality video and audio and reducing the risk of connection issues.

The live feeds are accompanied by a user-friendly interface that makes placing bets easy with options to mute audio, switch views and participate in a chat with other players.

The games are available in over 10 languages, including English, Italian, German, Russian and French.

Deal or No Deal Live

Deal or No Deal Live is a multi-layered 24-hour game based on the popular Channel 4 game show. To qualify for the live show, you must spin the bank vault and align three gold segments in the hot spot.

Once you’ve qualified, you can spin in the top up round to increase your biggest-prize briefcase by up to 500 times your bet. When the main game starts, 16 suitcases containing different prize amounts are revealed. You’re given four opportunities to accept or refuse the banker’s offer or play to the end when only two cases remain.

The host spins a giant vertical wheel with numbered segments and players predict the outcome to win up to 10 times their wager. If the wheel lands on one of the bonus game segments, an AR Monopoly board appears. Mr. Monopoly rolls the dice and runs around the board to reveal cash multipliers and bonus cards.

Lightning Roulette is a unique variation of the classic table game with an electrifying twist. Players can bet on the full range of options found on a traditional European roulette table.

As wagers are placed, up to five numbers are ‘struck’ by lightning. If the ball lands on one of these numbers, players are awarded a cash multiplier of up to 500 times the value of their bet.

Dream Catcher is a simple game with a multiplier of up to 40 times and was the first title in Evolution Gaming’s Money Wheel category,

Players can bet on six possible numbers and the host spins a giant vertical wheel to reveal an outcome. If the wheel stops on the multiplier segments, the host respins the wheel and the winning number will be multiplied by two or seven times.

Football Studio is a Dragon Tiger variation where players guess the highest value between two cards by betting on a home win, away win or draw. Other players’ wagers are shown as a percentage on the screen.

The game is played on a football-pitch style table and is often linked to real football fixtures with live match commentary, chat and goal celebrations hosted by enthusiastic ‘commentators’.

Evolution Gaming has the largest range of live dealer games online, including unique variations on classics such as Lightning Roulette and Live Football Studio.

Although the company was established much later than its competitors, Evolution Gaming has focused on creating high-quality live dealer games that are respected by players and operators alike.

If you’re a fan of the live dealer experience and want to play immersive games across devices with almost no technical issues, we would 100% recommend trying out an Evolution Gaming casino.

The Difference Between Live And Regular Online Casino Games

Whether you like to play games on your own or want the buzz of a live experience, our guide explains the difference and how to play both.