With almost 40 years of experience, Novomatic is a highly respected real-money game creator that’s produced over 340 online slots to date including Book of Ra, Fairy Queen and Ultra Fruits. Play your favourite Novomatic slot games at the casinos listed below.

Join SlotMillion Casino today to get access to over 1,800 casino games including Novomatic’s Sparkling Fruit slot game. New players are treated to a huge 100% match bonus and 100 free spins on top slots during your first week on the site. SlotsMillion also has plenty of weekly promotions to reward all players.

Over 18s and new players only.
playFun Casino REVIEW

Fun Casino is offering all new players a 100% match bonus up to £123 when they make their first deposit. Join to gain access to hundreds of casino games including Big Time Gaming Megaways™ titles like Who Wants To Be a Millionaire and Starquest.

Terms & Conditions: New players only. Maximum bonus is £123. Max bet with bonus is £5. No max cash out. Wagering is 50x. Skrill & Neteller excluded. Eligibility is restricted for suspected abuse. Cashback is cash, so no wagering. Cashback applies to deposit where no bonus is included. Full T&Cs apply.

Join Yako Casino and deposit to claim your 50% match deposit up to £222. Use your casino bonus to try out Thunderkick’s full portfolio of games including the 8-bit themed slot Flame Busters with exclusive fire drill bonus or get ready to rumble with a Mexican showdown in Luchadora.

Terms & Conditions: Min. deposit £10. Wager requirements are 40x bonus. Max. £100 withdrawal for registered players who have not yet made a deposit. Bonus funds max. bet is £5. Bonus is excluded for payments made with Skrill/Neteller. Further T&Cs apply.

With over 3,000 casino games to choose from, Videoslots has all your favourite games in one place. Sign up today and deposit £10 or more to claim a 100% match bonus, plus £10 extra cash to play top slot games including Book of Ra Deluxe and Lucky Lady’s Charm and Royal Lotus.

Play Book of Ra and over 700 popular casino games at BetVictor today. Join now and wager £10 on your favourite eligible games to claim your £90 welcome package to use across slots, table games, live casino dealers and instant wins. BetVictor offers weekly promotions with prizes up to £5,000.

Join All British Casino to get a 100% match casino bonus up to £100, plus all registered players can claim 10% lifetime cashback with zero wagering requirements. Choose from a huge variety of your favourite casino games from top providers including Novomatic’s full slots portfolio.

Get 10% Cashback
No Wagering

Over 18s and new players only.
playNo Bonus Casino

No Bonus Casino offers all registered players 10% daily cashback, giving you a chance to recoup any losses when playing top Novomatic slot games like Book of Ra Magic, Fairy Queen and Dragon Warrior. Sign up to No Bonus Casino today to claim your wager free cashback.

Terms & Conditions: Cashback is calculated on all deposits happening between 00:00 - 23:59 CET of any day, given that all deposited money has been lost. Players need to have a balance of not more than €10 in order to qualify for cashback. The cashback offer is valid for 10 days. Full T&Cs apply.

What else does Novomatic make?

Aside from online slot games, Novomatic is well-known for producing and providing video terminal products to pubs and casinos worldwide, including slot machines and electronic table games.

The company has also created a casino management system for land-based locations, as well as sportsbook solutions, bingo software and casino accessories.

If you want the live table experience, we’d recommend trying a casino with Evolution Gaming, Playtech or NetEnt games integrated.

Does Novomatic have a progressive jackpot network?

There are also individual progressive jackpots available on a variety of other titles, including From Dusk Till Dawn, Goddess Rising and Lucky Rose. 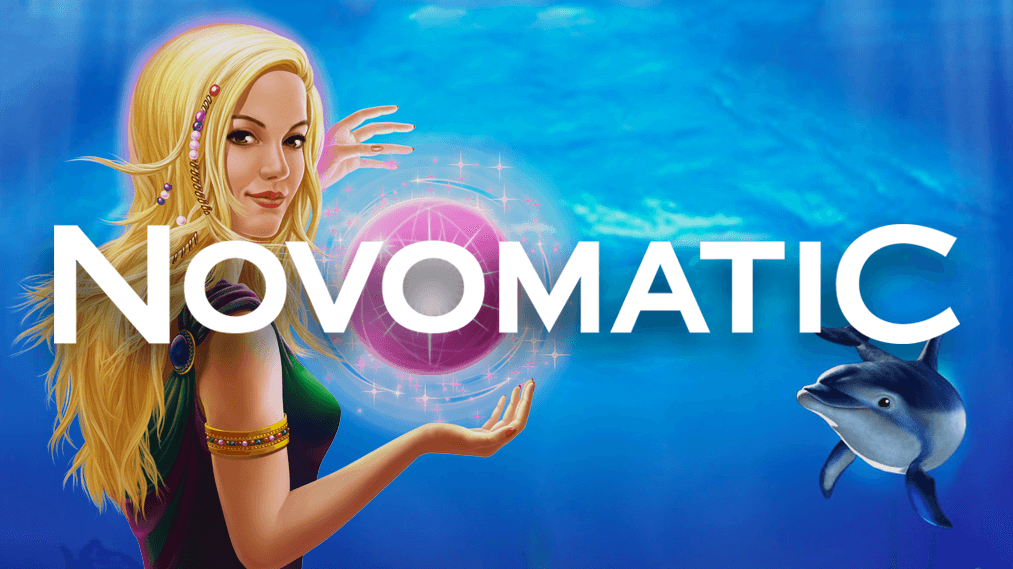 Novomatic is an international gambling company and one of the largest gaming technology corporations in the world.

The nineties was a notable decade for the company and in 1990, Novomatic launched its hugely popular American Poker II video poker game which quickly became known as ‘The Legend’.

The company also expanded into over 30 more territories to keep up with the demand for its products and became one of the first studios to introduce touch screens into its casino machines.

All Novomatic slot games run on the following platforms:

Novomatic currently employs over 30,000 people in 50 countries. The company generated approximately €2.5 billion in revenue in 2017.

Novomatic slot games are all designed on a standard playboard and use 10 - K symbols alongside those tightly linked to individual game themes.

Winning paylines and patterns vary between games and are clearly displayed at the side for players. All of the action buttons can typically be found at the bottom of the screen, including the menu, wager options, autoplay and spin button.

The general design of Novomatic slot titles isn’t remarkable – in fact, many of the older games are outdated and quite basic when compared to competitors like Thunderkick and NetEnt who are using the latest 3D render graphics and HTML5 technology.

However, in recent years Novomatic has been actively integrating its games portfolio onto HTML5 software and improved the illustrations and graphics on existing games like Book of Ra.

Many of Novomatic’s slot games contain a ‘gamble’ feature that allows you to double your winnings by correctly guessing whether the next card will be black or red.

Novomatic worked to ensure it’s slot portfolio is also available on mobile and tablet and we’re impressed with the results.

You can play Novomatic slot games in portrait mode, but we recommend turning your phone horizontally and playing full-screen as the action buttons are simplified so it’s easy to set up your bespoke wager.

Top 5 Novomatic Slots in the UK

Not sure where to start with 340 different games? Read about our favourite Novomatic slots licensed in the UK below:

Inspired by Indiana Jones, Book of Ra is Novomatic’s most successful game to date, spawning several spin-off titles and an exclusive progressive jackpot.

Every win comes with the chance to double your money with the opportunity to win up to 100,000 coins. Land three or more scatter book symbols to trigger the bonus round with a unique expanding symbol and a 2x multiplier on all winnings.

Lucky Lady’s Charm Deluxe is a 10 payline slot game that stars a woman on the hunt for great fortune. The board is filled with lucky charms including crystal balls, ladybugs, four-leaved-clovers and horseshoes.

The lucky lady is the game’s wild symbol and doubles any winning paylines its involved in. Land five ladies to be rewarded with up to £18,000 or get three or more scatters to trigger the bonus game with 15 free spins and a 3x multiplier!

Sizzling Hot takes inspiration from classic slot games and features a range of familiar symbols, including cherries, lemons and, of course, the famous lucky seven. It’s a simple slot game with just five paylines and no frills.

Although Sizzling Hot may lack bonus features, you can still increase your winnings and double your cash in the gamble bonus. Score five sevens in a winning payline to win up to 1,000 times your initial bet.

Set deep underwater, Dolphin’s Pearl is an aquatic adventure with 10 paylines and an abundance of marine creatures, including crabs, seahorses and stingrays.

Three or more pearl scatter symbols will land you 15 free spins; five could win you up to £50,000. The Dolphin acts as a wild symbol and doubles all wins.

Sprinkle some fairy dust over your gameplay with Fairy Queen. This magical slot features a 5x3 playboard decorated with mythical creatures including pixies, wild mushrooms and flowers.

All wins are rewarded with a turn-a-card gamble bonus where you can double your prize up to five times. Land five fairy light symbols to win up to £7,500,000.

Overall, Novomatic is a trustworthy brand. Its games are solid with some unique features such as it’s gamble bonus, and we’ve enjoyed seeing the improvements made to the quality and technology of the range in recent years.

We’d like to see Novomatic increase its portfolio to reintroduce live dealer games in the future and we’re also excited to witness continued improvements to gameplay and aesthetics.

Novomatic has a great range of slot games, however the exclusivity makes it difficult to recommend because they aren’t as widely available as alternatives such as NetEnt and Microgaming.

How Do Free Spins Work?

Learn how free spins work so you know if you're getting a good deal or if you should pass on a bonus.

New to the slot scene? Here's your guide to get you started!

<p>It seems that the days of theoretical RTP&rsquo;s might be numbered.</p>