On March 1st 2020, an article was posted on the Hull Daily Mail which claims that a player had a £10,000 win “ripped away” by online casino Lucky Vegas. Before continuing down this article, I recommend reading that piece so you can form your own opinions, unbiased by the following critique.

This sensational story claims that the winner, a woman from Withernsea, Yorkshire, tried to withdraw her large jackpot win, but was denied by the casino’s customer service team due to her account not being “secure enough” and had her winnings taken away from her.

At Online Bingo, we believe in fair journalism, even if that means criticism of the gambling industry and its practices. However, my instant reaction was that the report in question and the evidence provided by the player didn’t add up to a completely black and white take of an evil operator worming its way out of having to pay out a large sum.

I decided to break down the claims made in the article, the evidence provided by the player and then run this past both the casino’s affiliate manager and the Hull Daily Mail journalist. With this, I hope to try and uncover the full story and fact check the article that I believe has been written by taking the story on face value without further clarification.

Firstly, It’s important to note that I am not here to plainly accuse this woman, who is now £10,000 down, of trying to lie or mislead people. However I do think there are some inconsistencies that are important to point out that make this a story that isn’t worth publishing, which I place firmly on the shoulders of Hull Daily Mail.

The only evidence provided that there was a £10,000 win is the word of the player and the screenshot of the players balance. There has been no further evidence provided or comment from the casino about this large win, however I also don’t believe that anyone’s first reaction when winning a large sum of money would be to document the process.

The image caption, headline and article all refer to this £10,000 balance as “10k winnings” or “jackpot win” and suggests that the casino has denied to pay out these winnings and, even more shockingly, wiped her balance in the process.

However, if we look at the email communication with the casino that the player provided, it tells a different story. 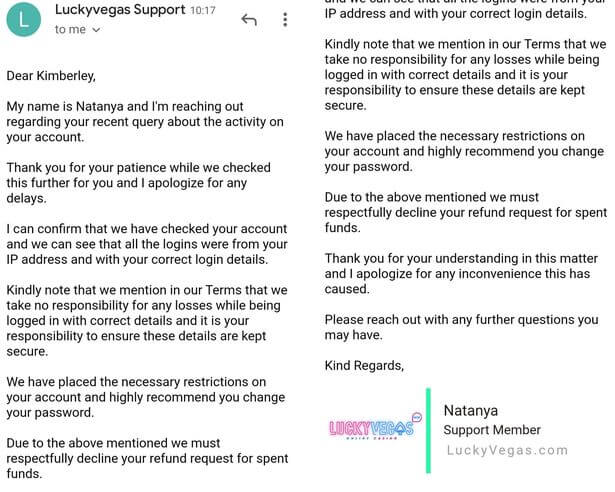 Reading the email in full, we start to get the idea that the player did not actually request a £10,000 withdrawal of winnings. The customer support member says “we must respectfully decline your refund request for spent funds”, which would suggest that the player requested a £10,000 refund on their losses, which is a very different thing to withdrawing £10,000 in winnings.

What’s baffling is that the article specifically quotes this key piece of information in the article, but doesn’t provide any clarification or make a single point about the disparity between this phrasing and the player’s claims of unfair treatment.

Based on everything we know, could it be that the player did actually win a £10,000 jackpot, but then proceeded to spend through it all before regretting it and making her refund request?

This is a common thing that can happen when a player feels the excitement of a big win. They believe they can replicate it, so they up the bet and keep playing to win even more. This was a bigger issue before last year, when players could cancel a withdrawal request and continue playing. However, as of May 13 2020, all withdrawal requests made by a player are final and the casino is no longer able to provide the option to reverse a withdrawal.

Claim 2: Lucky Vegas refused to pay out because the account was not secure

Both the article and the quotes from the player in question suggest that the reason Lucky Vegas denied to pay out was due to the player not providing the correct documentation, therefore making her account not secure enough.

However, in this instance the term “not secure” doesn’t refer to the player’s provided account documentation, which is standard industry practice and is required to be compliant with the UK Gambling Commission regulation & licensing rules, but instead refers to something that hasn’t been provided  by the player, or was omitted by the journalist.

If we refer back to the email communication above, we can see that the only mention of account security is seemingly in response to a claim made by the player that a third party had access their account.

The support member writes “I can confirm that we have checked your account and we can see that all the logins were from your IP address and with your correct login details.” She also later continues, saying “We […] highly recommend you change your password.”

The fact that this is relevant to the refund request means we can start to piece together the other, unseen side of the email exchange and deduce that the only security issue stems from the player suggesting that someone else has been on their account without permission and spent through all £10,000 of the winnings.

To ensure I was fully understanding the terminology used, the full withdrawal process and what could have happened (both from a regulation and data standpoint), I ran my findings and deductions past the Managing Director of a UK licensed casino & bingo operator. Before I passed my own thoughts on, I let this individual read the article to form their own opinion so we could compare.

We came to the same conclusion. The fact of the matter is that tight regulation by the UK Gambling Commission requires volumes of data to be captured and stored for exactly these kinds of purposes.

For Hull Daily Mail to suggest that this player had her winnings unfairly “ripped away” from her by Lucky Vegas and reference what she had planned to spend the money on multiple times, without taking the time to understand the full story, is simply irresponsible reporting.

What this appears to be is a simple case of regret after spending through a large sum of money, followed by a misunderstanding of the withdrawal process. If you read through your favourite online casino’s Trustpilot reviews, you will see that this kind of thing happens quite often.

Ultimately, I think this speaks to an underestimation of the regulation that UK licensed online casinos are subjected to and the amount of data they capture to protect players and themselves.

It is important to remember that gambling is random, entirely based on luck. Even when betting in small amounts its important to set limits on your gambling, which would have meant the player in this story wouldn't have been able to spend £10,000 in one sitting.

If this story has given you pause for thought about how you would react in this situation, or you would like to learn more about how you can protect yourself when gambling, please visit our safer gambling hub for all of our guides and information.

It’s not what you say, it’s how you say it

The issues with this article don’t lie solely with the reporting of this story without critical analysis, but also has a lot to do with how it uses certain words to generate sympathy towards the ‘protagonist’, the player, and breed distrust in its ‘antagonist’, Lucky Vegas.

The headline of the article reads “Withernsea mum’s £10,000 online casino jackpot ‘ripped away’ after Maltese company refuses to pay”, and in one line has already chosen a conclusion for its reader.

By referring to the player as “Withernsea mum”, Hull Daily Mail has already added dependants to this story. Now the casino in question has not only taken money out of this persons hands, but also the hands of her children and put millions of people into this persons shoes.

The choosing of the phrase “ripped away” is already definitively placing the blame in the casino, suggesting that the money was in the player’s hands and taken unfairly. There’s no room for questions or second guessing, because the headline has already done the legwork for you.

By referring to Lucky Vegas as a “Maltese company”, the Hull-based news outlet has seeded doubt in the legitimacy of the business. If the company is not based in the UK, can we really trust them to follow our gambling rules?

In fact, Hull Daily Mail makes a point of reminding the reader that Lucky Vegas is based out of Malta 3 times, as does the re-post of this article on The Mirror. However, what relevance does this have to the story?

A casino based in Malta, which offers gambling to players the UK must have a UK gambling licence to operate, is still subject to the same regulation as a UK company like BetFred, and the location of its head office shouldn’t matter.

It would be dishonest of me to try and act like OnlineBingo.co.uk doesn’t have an agenda with our stories and guides. Just like any outlet, we must make money, and in our case it is by introducing players to our categories and partnered sites. However, we try and remain frank and reliable to our readers by positioning our stance as an opinion of the industry, without resorting to tactics that play on an audiences perceived ignorance to the subject matter.

It's one thing for a local news site like Hull Daily Mail to post an article like this for its audience, which is limited in scope and really only relevant to the people of Hull. However what's worse is for an outlet like The Mirror, with an audience millions strong, to take this article and simply re-post it with minor edits, offering no further scrutiny or critical analysis to the story, whilst still making the same dishonest, but intentional mistakes.

From the article provided, Hull Daily Mail’s journalist didn’t appear to reach out to the casino’s operators, Vegas Folk, for comment or clarification — so I did. As of right now, I have not received any responses to my request for further details from Vegas Folk (operators of Lucky Vegas), nor have I had anything back from the journalists from Hull Daily Mail or The Mirror. However I will update this article to draw a full conclusion as soon as I do.