Cozy Games is one of the web's most trusted bingo platforms with a catalogue of over 150 slot and casino games and the support of gambling giant GVC Holdings. Take advantage of brilliant new player promotions including generous no deposit deals and reload bonuses. We’ve selected the top 10 Cozy Games bingo sites to play in April 2021.

Over 18s and new players only.
playBig Love Bingo REVIEW

The 70s called – they want their bingo back. Hop into your time machine to a groovier time with Big Love Bingo and when you arrive you’ll be greeted with a far out 300% match bingo bonus up to £120 plus two reload bonuses to take advantage of.

Smooth Bingo held itself to a high standard when it launched in 2014, but thanks to robust Cozy software, there’s no denying that it really is a smooth bingo site. You’ll find plenty of popular bingo, slot and casino games, a generous no deposit welcome offer plus a first deposit bingo bonus of £30.

Over 18s and new players only.
playHave a Ball Bingo REVIEW

At Have a Ball Bingo you’ll find lively 30, 80, 75 and 90 ball rooms, huge slots titles like Starburst and heaps of casino games. If you’re ready to have some fun, deposit £10 and you’ll receive £30 worth of bingo bonuses to give this great Cozy Games bingo site a go.

Over 18s and new players only.
playComfy Bingo REVIEW

There's nothing too comfortable about this established Cozy Games brand. Claim a 300% match bingo bonus up to £120 when you deposit at Comfy Bingo. You’ll also gain access to the free Newbie Room for your first seven days as well as other busy bingo rooms, big slot favourites and casino table games.

Over 18s and new players only.
playBingo Hero REVIEW

Bingo Hero is the hero of big promotions. Not only can you claim up to 300% extra on your first deposit, but there are also two generous reload bonuses to take advantage of. This quality Cozy bingo site features top name slots including Rainbow Riches and a special 90 ball jackpot room.

Grab yourself a deal that’s chillingly good at Igloo Bingo. Built on sturdy Cozy Games software, you can deposit £10 and receive £40 worth of bingo bonuses. If that wasn’t enough, make a second and third deposit and you’ll get a bonus of up to £110 combined!

Over 18s and new players only.
playVampire Bingo REVIEW

Sink your teeth into Vampire Bingo's exclusive first deposit deal. Deposit £20 or more and claim a 100% bingo bonus plus 20 extra spins on everyone’s favourite slot game – Fluffy Favourites! Plus get a spin on the Fortune Wheel every time you log in.

Deposit at Buttercup Bingo and claim a 300% welcome bingo bonus up to £120! This bright and colourful Cozy brand has a variety of bingo games to play, from 30 and 80 to classic 75 and 90 ball bingo. Why not give it a go?

Over 18s and new players only.
playMummies Bingo REVIEW

Mummies Bingo is a great place to play bingo, chat with other mummies and win a prize every time you log in. Join and you'll gain access to the Newbie Bingo Room to win up to £3,000 in your first week. Plus, deposit £20 to get a 100% bingo bonus and 20 free spins.

Terms & Conditions: Bingo room will be available only for the first 7 days from your registration day. Card validation required. Winnings will be in form of bingo bonus only and wagering (4x on bingo) apply on winnings. Further T&Cs apply.

What games can I play at Cozy Games sites?

Can I trust Cozy bingo sites?

All Cozy brands are licensed by the UK Gambling Commission and operate under the strictest regulations. All games are tested for fairness by iTech Labs and certified by eCOGRA.

Which payment methods are accepted? 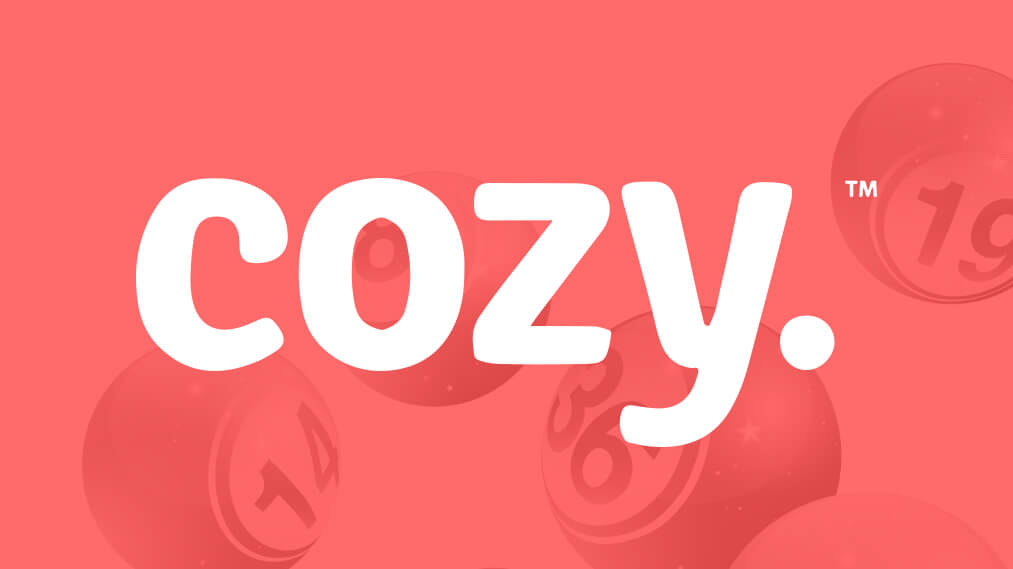 For over a decade, Cozy Games has been one of the biggest names in online bingo. Starting as a small team of online gaming experts, they’ve produced more than 150 games to date.

This includes slots themed around popular TV shows and movies such as Game of Thrones and Bridesmaids, traditional casino games like roulette and blackjack, and even scratch cards.

As the company grew, so did the need for strong networks. All Cozy bingo sites run on three main networks. These are:

Launched in 2015, Lucky Duck is the smallest of the three Cozy networks, with only two sites. However, it certainly makes up for the lack of quantity with its quality of promotions and range of games.

You can play 50, 75, 80, and 90 ball bingo varieties at Games Village and Bingo Magix, plus claim a 400% deposit bonus and a plethora of other regular promotions.

It may be less populated than the other two networks, but that doesn’t mean it’s any less enjoyable. If anything, you’ll find a closer, tighter-knit community to be part of.

The Live Bingo Network (LBN) is the largest of the bunch. Launched in 2009 with Landmark Bingo, the network has since gone on to host over 50 other brands.

In 2014, LBN absorbed Winners Bingo Network and added a number of extra sites to its catalogue, including Bingo Boat, Vampire Bingo and Velvet Bingo.

As with many Cozy bingo sites, LBN brands offer no deposit bingo bonuses which is why we suspect these sites are so popular with players. You’ll also get access to the free room that pays out up to £3,000 in your first week.

The Best Bingo Network is the older brother of LBN and the first network to run on the software, but there isn’t a huge difference between the two.

You’ll find similar promotions and a comparable experience, however perhaps not enough to attract players from the smaller network with a greater chance of winning.

There are only 20 sites on this network, including Gone Bingo, Epic Bingo and Little Miss Bingo, each with generous welcome bonuses.

The evolution of Cozy Games

The huge player volumes that the platform enjoys today didn’t happen overnight. Cozy Games bingo was established at a time when gambling technology was less advanced and the company had to embrace many technological and industry developments to stay ahead.

In October 2017 the team rolled out a new player promotion throughout their networks, which replaced the £15 no deposit bonus with seven days’ access to a free bingo room.

The start of 2018 marked another significant moment for Cozy Games when it was acquired by GVC Holdings – one of the world’s largest sports betting and gaming groups.

The acquisition brought with it opportunities to make further software advancements thanks to GVC’s highly robust technology and financial backing. One of the first major improvements was the removal of restrictive withdrawal limits, previously £300 per week and one every five days.

These were replaced by withdrawal limits of up to £1,000 per day, £3,000 per week (£5,000 for a progressive win) and £5,000 per month. This was a significant step in the right direction to keep players happy in a competitive industry.

The takeover also saw the addition of games from top slot providers such as NetEnt and Microgaming – a major win for existing players who were craving more variety.

The King of No Deposit Offers

There’s a reason that Cozy Games has earned its reputation as the “King of No Deposit Offers” - over 100 bingo sites running on its software offer one.

A no deposit offer works by allowing new players to sign up and start playing on a site without any money in their eWallet. It essentially allows you to play games with “free” funds, providing an opportunity to try before you buy.

Operators benefit by signing up new players who can be converted into paying customers in the future.

Why choose a Cozy bingo site?

With 4.5 million active players, it’s clear that Cozy Games is doing something right. If you want a site that’s going to keep you entertained with more than just bingo, you’ll discover a huge variety of games to play.

Whether you’re looking for casino classics or popular slot games, you’ll find something that suits your tastes. Cozy were also early adopters of HTML5, which means you can play all of the games seamlessly across your devices.

As one of the market leaders, the company refuses to compromise on quality. The software is seamless, sturdy and strong enough to withstand the millions of players that use it every day.

If you’re looking for well-established bingo sites, Foxy Bingo migrated over to Cozy software in November 2018 after ending its long-term relationship with 888’s Dragonfish platform.

<p>New license changes from the UK Gambling Commission indicate that Cozy Games is&nbsp;on the verge of being sold to GVC Holdings.</p>

This deal follows the decision to loosen restrictions in the country.

Has it been a success?