Your complete guide to Slingo 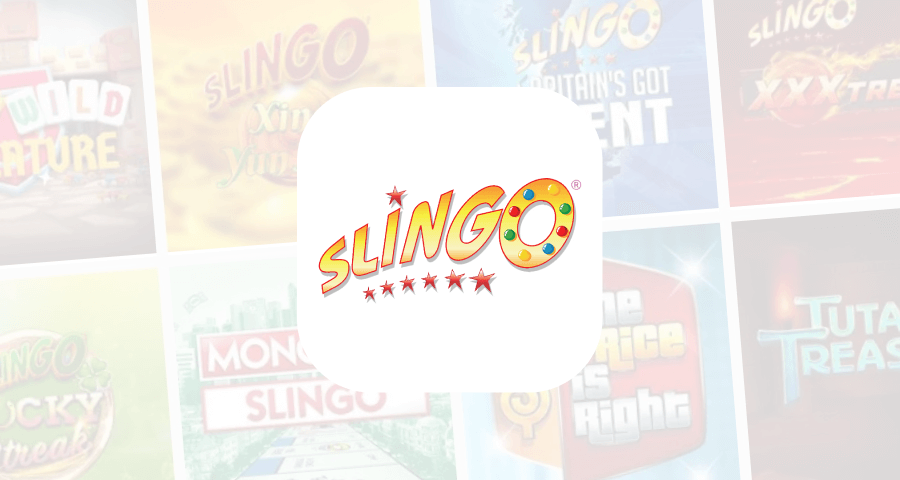 Although Slingo was first introduced in 1996 it has really taken off in popularity in the last few years. Already, Slingo boasts an impressive shelf of games, with big familiar brands such as Monopoly and Rainbow Riches having Slingo versions available at the top online casinos.

Recently, Slingo Fluffy Favourites and Slingo Starburst were announced to be next on the Slingo horizon, as major slot providers, Eyecon Gaming and NetEnt respectively, partner with Gaming Realms to bring Slingo versions of these already popular slots to a wider audience.

But, how does Slingo work and what is it?

Slingo, so named because it is a mixture of bingo and a slot machine, can look confusing to begin with, but once you’ve got the hang of it, it is an exciting updated version of the classic online bingo game we all know and love.

How do you play Slingo?

Sporting a 5x5 grid and using the 75-ball bingo format, Slingo uses a reel spin to ‘call’ your numbers and fill in your grid. It is essentially calling multiple numbers out at once for you. But that’s not why it’s become so popular.

The board is completely random, just like in bingo, and your aim is to complete lines, or Slingos as they’re called, or to fill in the whole board with matches and get the ‘Full House.’ You can create matches and fill in your board when you spin the reel, usually found below your board. The numbers that appear on the reel might match those in your board, and if they do, you’ve got a match! Now to daub and see if you can complete any Slingos.

At the very beginning of the game, you set your wager, just as with any bingo or slot game. The game then begins, with a set number of initial spins. You generally get 10 or 11, but this varies from game to game, and these spins cost just one times the amount of your wager. So, if you had wagered 20p and the game awards 11 initial spins, you would get 11 spins for 20p.

After these initial spins you can choose to end the game and collect your winnings, if you have any, or wager more for extra spins. Again, the number of extra spins you can purchase varies depending on which Slingo game you are playing.

The value of your extra spins is not fixed. The cost of these extra spins depends on three factors; your initial wager, the positioning of plots you have filled out already, and the potential prizes from your next spin. If you were only two plots away from a full house your extra spin is likely to cost a lot more than if you had 6 remaining plots to fill.

Because Slingo is a mixture of bingo and slots, the hybrid game brings bonus elements of slot games to the bingo board. These include a joker, a free joker, and a devil, as well as free spins.

Watch out for the devil though, as he is a blocking symbol, blocking any potential plots along the line being filled for that one roll. And of course, free spins are what they say on the tin, an extra spin or spins, giving you more chance to hit that highly sought after ‘Full House.’

It is also worth noting that some of the themed Slingo games have their own unique bonus rounds, just like their sister slot games. For example, Slingo Rainbow Riches has seven different bonus rounds which can be triggered progressively as you complete more lines, or Slingos.

While most Slingo games use the standard 5 by 5 grid and a reel, other games use formats that match their theme. For example, Slingo Monopoly uses the Monopoly board instead of a reel, rolling dice to determine where you will move along the board to, and subsequently which plots on your board you can daub off.

Slingo Advance is completely different in that it has players progress through levels as they play, accumulating a set number of plots before they can climb up a level.

With so many different styles and themes available, it is really a matter of personal preference as to which Slingo game to play.

We know that this can all be a bit confusing so we have put together a run down some of the most popular Slingo games to help clear things up for you and ensure you can get spinning and daubing as quickly and simply as possible.

Slingo Classic is a retro styled version of the standard game, sporting a 5x5 grid with a reel at the bottom. The possible wagers from 20p up to £25. The game features jokers, super jokers, blocking devils, free spin symbols, and coin symbols which award an instant cash prize.

Slingo Rainbow Riches is based upon the popular Rainbow Riches slot games. With an RTP of 95.6% it pays out slightly better than other Slingo variations, but you need to complete 5 Slingos to receive any kind of payout. At 5 Slingos the wishing well bonus round is triggered, and each subsequent Slingo triggers a new bonus round.

This Slingo game is unusual and interesting in that all payouts come from bonus round features activated by completing Slingos, not from the Slingo paylines themselves, and with possibly unlimited extra spins there is the chance to win big with this Slingo game.

Monopoly Slingo is possibly the most unique of all the Slingo games on offer! Instead of a reel there is the Monopoly board, and instead of spinning you roll the dice to see how many spaces you move forward, which in turn determines which, if any, plots on your grid you’ll daub off.

As with the classic board game, rolling a double on the dice awards you a free extra spin, and there are a whole host of other bonus features within the game. Pass ‘Go’ on the game board to build up the kitty on the ‘Free Parking’ square, watch out you don’t land yourself in jail, and hope for a great prize when you land on the ‘Community Chest.’

As for the paylines, you can start winning from the very first Slingo, unless you’ve chosen the more volatile T-Rex character, which starts paying out from 4 Slingos. The character you choose also determines how many extra spins you can purchase at the end of your initial spins, with a maximum of 8 available on any one game. Remember, the price of your next spin is determined by the positioning of your daubed off plots and the potential prizes from your next roll.

Initial Spins: 7 or 8, depending on character chosen

Extra Spins: 4, 6, 8, or unlimited, depending on character chosen

While this Slingo variation does sport the 5x5 grid, as the name suggests, there are levels that are blocked off until you advance and unlock them. Starting with just the bottom row open and one initial spin.

If you don’t get a match it’s game over and try again. If you do make a match, level 2 opens up and the reel spins again. 3 matches on level 3 opens up level 4 and respins the reel, and 3 matches on level 4 opens level 5, where jackpot wins are available.

Extra spins are available after each game, again with the price being dependent on your potential winnings from the next spin. Paylines run as usual, both horizontally and vertically, but you can also win some cash for every match on the board, without having to complete a Slingo.

While this Slingo has a Britain’s Got Talent theme, it is effectively the same as Slingo Classic, with a standard 5x5 grid and reel at the bottom. The RTP stands firm at 95% and the minimum possible stake is 50p. After using the 11 initial spins, another 4 are possible as extras to try and achieve full house!

Who Wants To Be A Millionaire Slingo

This Slingo game is not just another 5x5 grid with a reel to spin. Set your stake limit starting from £1 up to a total of £10 and start your first 9 initial spins. If you reach full house in the first 7 spins you’ll hit the jackpot, which is a x100,000 multiplier of your stake!

As for the paylines, complete a Slingo to reveal a randomly selected symbol, styled after the lifelines in the popular TV show. Match three symbols to be awarded a prize. At the end of the game you can choose to collect your winnings or buy more spins, with an unlimited amount on offer. Remember, buying extra spins until you complete your grid doesn’t guarantee you a win!

Now you’re ready to get spinning and daubing - and hopefully winning. So, why not try Slingo at the best online slot sites around and find the Slingo game that’s right for you?

Gaming Realms has launched two new versions of the hit game Slingo! Check out Slingo Boom and Slingo DOND inside!

Pragmatic Play release Curse of the Werewolf Megaways
Pragmatic Play hits the jackpot with yet another Megaways slot. The spooky Curse of the Werewolf Megaways slot is sure to delight. Read more.
African Legends announced as new slot from Microgaming
Microgaming announces the launch of their newest safari-themed slot game, African Legends. Will you herd your way to an elephant sized win? Read more.
Hannah Timoney