Choosing a type of bingo to play

The most obvious and important thing you’ll need when running a charity bingo night is, well, bingo! If you already know what bingo is then you should already know the basics. If not, check out our previous guides on the subject:

You can’t just dive in head first into balls, tickets and daubers though, first you've got to know what kind of bingo you’re going to play on the night. Yup, you read that correctly, there’s more than one kind of bingo!

Don’t let that scare you, we’re going to break down the two main types of bingo, explain the benefits of each game and give you some advice on what game is best for your fundraiser!

This is the classic, familiar bingo game that’s played in bingo halls across the United Kingdom and on online bingo sites. The rules are very simple to follow, it’s easy to understand when you have a win and it’s perfect for beginners and experts alike.

As you can see, 90 ball bingo tickets have three lines and each line has 5 numbers on it. Players can buy more than one ticket, but that means they need to follow on with multiple lines.

To make things easier to follow, each column will only ever have 9 numbers in it. For example, the first column will only have numbers 1-9, the second column 10-19, the third column 20-29 and so on.

If the number 32 was called, you only need to check the 4th column to see if it’s a matching number. Simple right? You can explain this concept before the game starts to make sure the game runs smoothly and without delay.

To win a game of 90 ball bingo, a player must call out when they daub all the numbers in any horizontal line of their ticket.

Why play it at your bingo night?

Because 90 ball bingo is the most popular form of bingo in the UK! People who have played in halls or have tried online bingo will already be familiar with the rules. It is also simple to explain and there’s very little confusion about what constitutes a win.

This game is the most popular type of bingo in the USA, but it is also popular on online bingo sites too. Unlike 90 ball bingo, the prize for 75 ball bingo is awarded to the first player to complete a pattern that’s highlighted on everyone’s ticket.

This game adds more variation to bingo, but it is also harder to follow if you decide to buy multiple tickets. 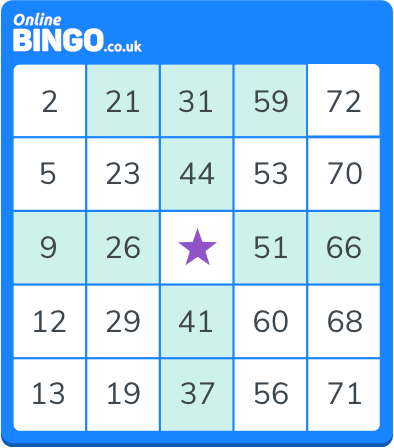 The above ticket has an example of what a game’s pattern might look like. The highlighted pattern can change quite drastically in shape too.

The pattern could be a shape like a diamond or an X, or the boxes could form a familiar shape like a christmas tree, a fish or a plane.

You can download cards with pre-determined patterns or get creative and make your own!

Fill in a pattern to win

The first player to complete the pattern by daubing numbers on their ticket wins the prize.

The centre square of the grid is called a free space, which means that it counts towards everyone’s patterns without needing to daub it.

Unlike 90 ball bingo, there are not multiple prizes to be won. Instead, the first person to call out their win is awarded with the whole jackpot.

Why play it at your bingo night?

The way that prizes are awarded in 75 ball bingo means it can be more interesting to play or more varied than 90 ball bingo, especially if you plan on running multiple games throughout the night.

Which type of bingo should you play?

Of course, what game you decide to play is entirely down to your personal preference, the audience you intend on inviting and what equipment you have at hand.

If you are playing with experienced bingo players, 90 ball bingo will require less explanation, is easier to follow and offers more chances to win a prize.

If you’re planning on playing lots of games throughout the night, 75 ball bingo gives you a chance to mix up the win conditions and award larger prizes, as there can only be one winner.

If you have enough players, it’s entirely possible for you to play both games and mix it up throughout the night, but be mindful not to confuse your audience.

Now the difficult decision is out of the way, it’s time to learn the rules of bingo!

Check out the previous article in the series: Do you need a gambling licence? Visit the hub page and read our entire 12-part guide to organising a bingo night fundraiser here!